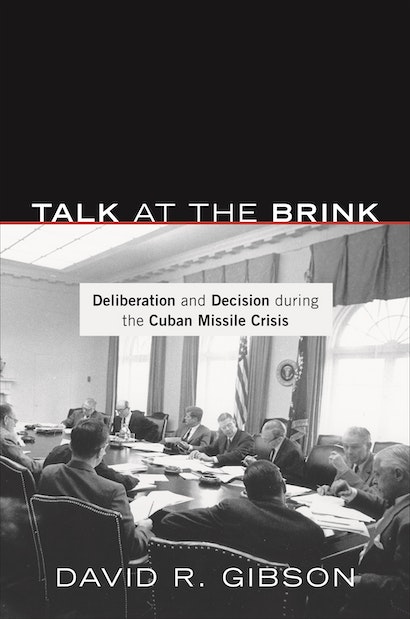 In October 1962, the fate of the world hung on the American response to the discovery of Soviet nuclear missile sites in Cuba. That response was informed by hours of discussions between John F. Kennedy and his top advisers. What those advisers did not know was that President Kennedy was secretly taping their talks, providing future scholars with a rare inside look at high-level political deliberation in a moment of crisis. Talk at the Brink is the first book to examine these historic audio recordings from a sociological perspective. It reveals how conversational practices and dynamics shaped Kennedy’s perception of the options available to him, thereby influencing his decisions and ultimately the outcome of the crisis.


David Gibson looks not just at the positions taken by Kennedy and his advisers but how those positions were articulated, challenged, revised, and sometimes ignored. He argues that Kennedy’s decisions arose from the intersection of distant events unfolding in Cuba, Moscow, and the high seas with the immediate conversational minutia of turn-taking, storytelling, argument, and justification. In particular, Gibson shows how Kennedy’s group told and retold particular stories again and again, sometimes settling upon a course of action only after the most frightening consequences were omitted or actively suppressed.

Talk at the Brink presents an image of Kennedy’s response to the Cuban missile crisis that is sharply at odds with previous scholarship, and has important implications for our understanding of decision making, deliberation, social interaction, and historical contingency.

David R. Gibson is assistant professor of sociology at the University of Pennsylvania.

"[W]ith his thorough and incisive analysis of the ExComm meetings, David Gibson has provided a new, refreshing, and disturbing look at how US decision-makers responded to the presence of Soviet missiles in Cuba."—Asa McKercher, Dzplomacy & Statecraft

"For its empirical contribution alone, Talk at the Brink is required reading for scholars of Cold War history and American politics. The writing is witty and uncluttered, while the raw intimacy of the back-and-forth among ExComm members, as rendered by the painstakingly precise transcription and coding, makes for a rather riveting and eminently teachable experience."—Phaedra Daipha, American Journal of Sociology

"Gibson's Talk at the Brink is a stimulating and insightful contribution to scholarship on one of the single most important events in American history of the past sixty years—the Cuban Missile Crisis. . . . The book is well worth a read, and a place on your bookshelf."—Erik Schneiderhan, Oxford University Press

"The ping-pong match known as the Cuban missile crisis of October 1962 is reinterpreted in this brilliant, analytic exposé. David Gibson sheds landmark new light on the terse diplomacy between Kennedy and Khrushchev. His research is prodigious. Highly recommended!"—Douglas Brinkley, Rice University

"Some phenomena are so important, so consequential, that they are worth putting under a microscope. If true for the cells of a human being, why not apply another kind of microscope to the crisis conversations skirting the edge of global thermonuclear war? That is what Gibson has done, giving us a renewed sense of indeterminacy about the whole event. It takes a rare kind of historical sociologist to find this extra depth of understanding."—Philip Zelikow, University of Virginia, coauthor of Essence of Decision: Explaining the Cuban Missile Crisis

"In Talk at the Brink, Gibson has established himself as one of sociology's leading conversational analysts. Drawing on actual audio recordings, he offers us a fly-on-the-wall perspective on the deliberations among Kennedy's inner circle during the Cuban missile crisis. Remarkably nuanced, this is microsociology at its best."—Eviatar Zerubavel, Rutgers University, author of The Elephant in the Room: Silence and Denial in Everyday Life and Ancestors and Relatives: Genealogy, Identity, and Community

"This book makes a major intellectual and scholarly contribution to our understanding of human behavior. I predict that it will be much cited and lead to significant shifts in the way scholars and the lay public think about the Cuban missile crisis in particular and decision making and leadership in general. The book's strongest lesson is how open and nonlinear important decisions can be."—Jane Mansbridge, Harvard University

"Talk at the Brink is an important book for sociologists, political scientists, linguists, historians, and theorists of conflict resolution. Analyzing John F. Kennedy's taped deliberations during the perilous days of the Cuban missile crisis, Gibson persuasively argues that talk has its own prerogatives and rules and that these things matter in how decisions get made. Extremely lucid and illuminating."—Robin Wagner-Pacifici, author of The Art of Surrender: Decomposing Sovereignty at Conflict's End