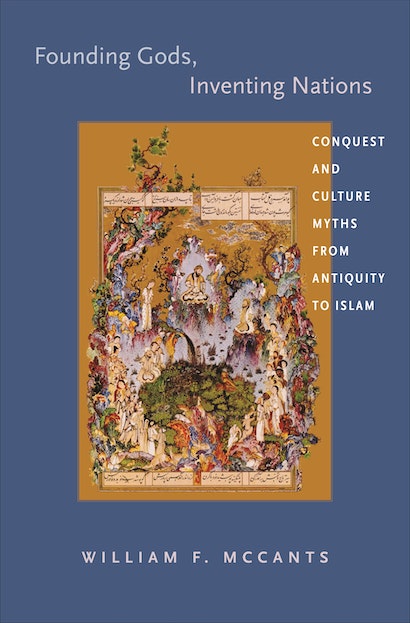 From the dawn of writing in Sumer to the sunset of the Islamic empire, Founding Gods, Inventing Nations traces four thousand years of speculation on the origins of civilization. Investigating a vast range of primary sources, some of which are translated here for the first time, and focusing on the dynamic influence of the Greek, Roman, and Arab conquests of the Near East, William McCants looks at the ways the conquerors and those they conquered reshaped their myths of civilization’s origins in response to the social and political consequences of empire.


The Greek and Roman conquests brought with them a learned culture that competed with that of native elites. The conquering Arabs, in contrast, had no learned culture, which led to three hundred years of Muslim competition over the cultural orientation of Islam, a contest reflected in the culture myths of that time. What we know today as Islamic culture is the product of this contest, whose protagonists drew heavily on the lore of non-Arab and pagan antiquity.


McCants argues that authors in all three periods did not write about civilization’s origins solely out of pure antiquarian interest — they also sought to address the social and political tensions of the day. The strategies they employed and the postcolonial dilemmas they confronted provide invaluable context for understanding how authors today use myth and history to locate themselves in the confusing aftermath of empire.

"McCants' book is an outstanding work, its composition demanding not only vast knowledge of the various cultures which thrived in the ancient Near East and the Mediterranean basin but academic audacity as well. . . . [A] thorough, accurate and intelligent debate on a very interesting subject which has until now not been treated cross-culturally."—Milka Levy-Rubin, Jerusalem Studies in Arabic and Islam

"This innovative book tackles the fascinating subject of how and by whom culture was invented, and discusses this phenomenon by looking at the ancient, Greco-Roman, pre-Islamic Arabian, and Muslim worlds. Examining various texts that have rarely been analyzed in the same place, the book will appeal to a diversity of readers and fields."—Robert Hoyland, University of Oxford

"McCants explores culture myths over a long period—from Sumerian literature of the third millennium BCE to Arabic works of the ninth century CE—and over a wide but interconnected geographical area spanning the Mediterranean basin to the Near East as far as Persia. The breadth of this undertaking and the materials gathered together, especially from the Arabic side, are quite original."—Ian S. Moyer, University of Michigan