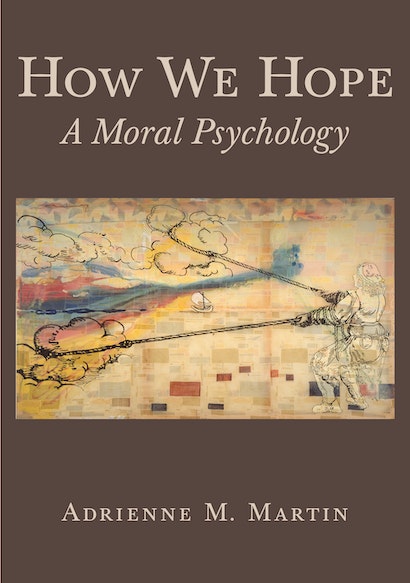 What exactly is hope and how does it influence our decisions? In How We Hope, Adrienne Martin presents a novel account of hope, the motivational resources it presupposes, and its function in our practical lives. She contends that hoping for an outcome means treating certain feelings, plans, and imaginings as justified, and that hope thereby involves sophisticated reflective and conceptual capacities.


Martin develops this original perspective on hope — what she calls the “incorporation analysis” — in contrast to the two dominant philosophical conceptions of hope: the orthodox definition, where hoping for an outcome is simply desiring it while thinking it possible, and agent-centered views, where hoping for an outcome is setting oneself to pursue it. In exploring how hope influences our decisions, she establishes that it is not always a positive motivational force and can render us complacent. She also examines the relationship between hope and faith, both religious and secular, and identifies a previously unnoted form of hope: normative or interpersonal hope. When we place normative hope in people, we relate to them as responsible agents and aspire for them to overcome challenges arising from situation or character.


Demonstrating that hope merits rigorous philosophical investigation, both in its own right and in virtue of what it reveals about the nature of human emotion and motivation, How We Hope offers an original, sustained look at a largely neglected topic in philosophy.

Adrienne M. Martin is associate professor of philosophy at the University of Pennsylvania.

"Inspired by her work with terminally ill cancer patients, Martin provides a valuable analysis of hope that makes excellent use of the tools of analytic philosophy, recent work in neuropsychology, and the philosophies of Immanuel Kant and Gabriel Marcel."—Choice

"[A] short but substantial tome. . . . Anyone who is interested in the ethics of hope will find a great deal of valuable insight in this book."—Ben Sherman, Philosophy in Review

"Martin not only insightfully advances the philosophical literature on hope, but also, maybe more importantly, provides substantial food for thought to anyone whose philosophical interests encompass desires and motivations."—Rachel Fredericks, Mind

"Martin's work is a timely and instructive contribution to a rapidly expanding literature on hope."—Aaron D. Cobb, Journal of Moral Philosophy

"Moral psychology should hope for more work like Martin’s that fruitfully and thoughtfully explores the complexities of our moral emotional lives."—Krista K. Thomason, European Legacy

"Hope is an important yet recently neglected philosophical topic. Hope plays a central role in our daily plans, and in the ways we face upheaval, illness, and loss. But is hope rational? Does it do any good? Martin's fresh look at these questions is insightful, rigorously and resourcefully argued, and genuinely illuminating. A further strength is the book's serious engagement with Kant, Hume, and other historical thinkers."—Martha C. Nussbaum, University of Chicago

"Adrienne Martin decidedly advances our understanding of an elusive piece of human experience thinkers have reflected upon for centuries. Deftly integrating, and then exceeding, the litany of thought that has preceded her, she offers a compelling original account not of what we hope for, or even of whether we should hope, but of what we are doing when we hope. A finely honed model of philosophical argument, this beautifully written, accessible, and compassionate work will engross and enlighten people from across the academic disciplines, as well as the interested casual reader."—Susan Sugarman, Princeton University

"Martin develops a strikingly original analysis of what hope involves in terms of the kind of justification one is prepared to give for fantasizing about, making plans to achieve, and positively anticipating the hoped for outcome. Her book is rich with insights and is the most sophisticated and extensive philosophical analysis of hope available."—Cheshire Calhoun, Arizona State University

"This thought-provoking and well-crafted book makes an important contribution to the literature on the underdiscussed notion of hope. The origin of the work in the author's experiences in the medical arena is compellingly described, and the analysis that follows is creative and original. How We Hope will be a valuable resource for philosophers and psychologists alike."—Andrew Chignell, Cornell University