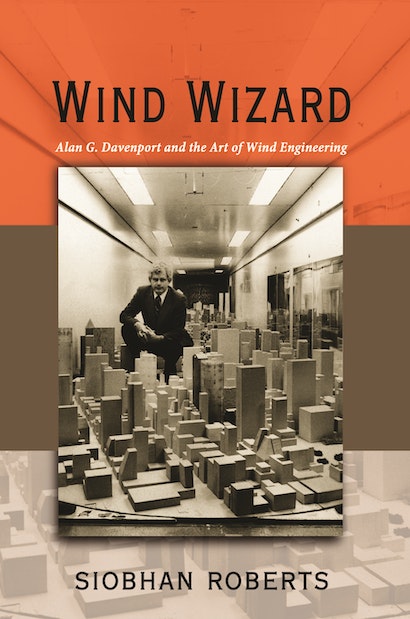 With Wind Wizard, Siobhan Roberts brings us the story of Alan Davenport (1932-2009), the father of modern wind engineering, who investigated how wind navigates the obstacle course of the earth’s natural and built environments—and how, when not properly heeded, wind causes buildings and bridges to teeter unduly, sway with abandon, and even collapse.

In 1964, Davenport received a confidential telephone call from two engineers requesting tests on a pair of towers that promised to be the tallest in the world. His resulting wind studies on New York’s World Trade Center advanced the art and science of wind engineering with one pioneering innovation after another. Establishing the first dedicated “boundary layer” wind tunnel laboratory for civil engineering structures, Davenport enabled the study of the atmospheric region from the earth’s surface to three thousand feet, where the air churns with turbulent eddies, the average wind speed increasing with height. The boundary layer wind tunnel mimics these windy marbled striations in order to test models of buildings and bridges that inevitably face the wind when built. Over the years, Davenport’s revolutionary lab investigated and improved the wind-worthiness of the world’s greatest structures, including the Sears Tower, the John Hancock Tower, Shanghai’s World Financial Center, the CN Tower, the iconic Golden Gate Bridge, the Bronx-Whitestone Bridge, the Sunshine Skyway, and the proposed crossing for the Strait of Messina, linking Sicily with mainland Italy.

Chronicling Davenport’s innovations by analyzing select projects, this popular-science book gives an illuminating behind-the-scenes view into the practice of wind engineering, and insight into Davenport’s steadfast belief that there is neither a structure too tall nor too long, as long as it is supported by sound wind science.

Siobhan Roberts is a freelance science journalist who first wrote about Davenport and wind engineering for the New York Times. She is the author of King of Infinite Space: Donald Coxeter, The Man Who Saved Geometry. 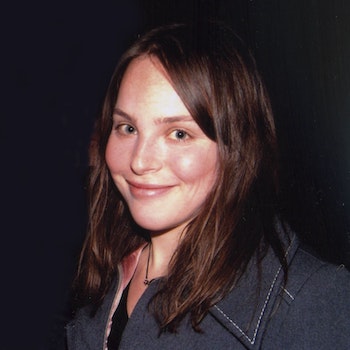 "Wind Wizard is an unlikely gem, a biography of both a man and a field. . . . From now on, I shall refer students and professors alike to Roberts' clear account. . . . Roberts has written a largely equation free book in which technical subtleties such as aeroelasticity and Davenport's statistical description of turbulent buffeting are set out clearly, engagingly and accurately. Her precise, vivid phrases, such as vortices 'pushing and shoving the structure this way and that like a gang of bullies', will enliven my future lectures."—Allan McRobie, Nature

"Recommended. . . . The dramatic undulations and final collapse of the Tacoma Narrows Bridge in 1940 demonstrated the power of wind and impelled a new discipline of wind engineering. Alan G. Davenport led the field with his meticulous science and innovative wind tunnel. Journalist Roberts delves into Davenport's portfolio of superlatives, which includes the world's tallest bridge, France's Millau Viaduct."—Marissa Fessenden, Scientific American

"Richly drawn. . . . A winning, enlightening investigation into wind engineering and the man who made the airwaves speak."—Kirkus Reviews

"Roberts's book is more than an account of Davenport's life—it also provides fascinating insights into some of civil engineering's greatest achievements, and closest shaves. She reminds us how much we rely on wind engineering: from portable toilets to space rockets, Davenport tested everything. . . . With climate change making violent storms like Sandy more common, the story of the wind wizard has never been more relevant."—Ben Crystall, New Scientist

"Roberts' Wind Wizard is a tenaciously gripping and extraordinarily well-told tale of one of the great figures in structural engineering."—Nick Smith, Engineering & Technology

"Roberts has done a very good job demonstrating the importance of Davenport's more sophisticated approach to wind and its effects on structures in making many of the world's tall buildings possible."—Choice

"An elegant piece of work. . . . Siobhan Roberts' style has literary merit. The narrative flows uniformly. The reader is not jolted by phrases, by fragments singing out of tune. I would not be surprised if she were to try to write novels in the future. After all, what's past is prologue."—Paolo Maria Mariano, Mathematical Reviews

"This thoughtful biography captures the genius of Alan Davenport. Knowing Davenport for some forty years and working with him throughout the design of New York's World Trade Center, I witnessed his ascent as the leader in wind engineering, pioneering that science as we know and depend upon it today. Roberts skillfully tells the engineering story, uncovering fascinating details about Davenport and his work previously unknown to me. The reader emerges having enjoyed an intimate and informative visit with Davenport, one of the most interesting engineers of our time."—Les Robertson, recipient of the 2011 International Award of Merit in Structural Engineering

"Wind Wizard is a masterpiece of science writing at its best: informative, interesting, and entertaining. I warmly recommend it to anyone interested in the important issues of our time. Roberts is one of our best writers on science and mathematics today."—Amir Aczel, author of Fermat's Last Theorem: Unlocking the Secret of an Ancient Mathematical Problem

"Roberts has a rare gift for writing about technical matters without oversimplifying (and thus annoying the scientists) or becoming too abstruse (and thus putting off her readers). In Wind Wizard, that admirable balance is deftly used to create a fascinating portrait of a little-known scientist who was a giant in his field—a story which also serves as cautionary tale for a world apparently confronting ever more severe weather."—Marq de Villiers, author of Windswept: The Story of Wind and Weather

"Wind Wizard provides an excellent overview of wind engineering for general readers."—Henry Petroski, author of The Essential Engineer: Why Science Alone Will Not Solve Our Global Problems

"This captivating and compelling biography looks at the life of Alan Davenport, and his significant contributions to wind engineering. Highlighting Davenport's unique approach and technical prowess, this book delves into the behind-the-scenes engineering on major architectural construction projects, such as the Twin Towers. A satisfying read."—Drew Landman, Old Dominion University