From eminent critic Peter Brooks, an exploration of the modern preoccupation with identity 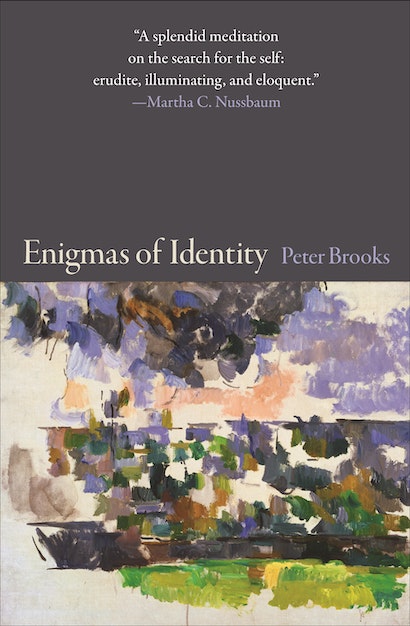 “We know that it matters crucially to be able to say who we are, why we are here, and where we are going,” Peter Brooks writes in Enigmas of Identity. Many of us are also uncomfortably aware that we cannot provide a convincing account of our identity to others or even ourselves. Despite or because of that failure, we keep searching for identity, making it up, trying to authenticate it, and inventing excuses for our unpersuasive stories about it. This wide-ranging book draws on literature, law, and psychoanalysis to examine important aspects of the emergence of identity as a peculiarly modern preoccupation.

In particular, the book addresses the social, legal, and personal anxieties provoked by the rise of individualism and selfhood in modern culture. Paying special attention to Rousseau, Freud, and Proust, Brooks also looks at the intersection of individual life stories with the law, and considers the creation of an introspective project that culminates in psychoanalysis.

Elegant and provocative, Enigmas of Identity offers new insights into the questions and clues about who we think we are.

Peter Brooks is the Andrew W. Mellon Foundation Scholar at Princeton University. He is the author of many works of literary criticism, including Henry James Goes to Paris (Princeton), Reading for the Plot, Psychoanalysis and Storytelling, and Troubling Confessions. He is also the author of two novels, The Emperor's Body and World Elsewhere.

"A wide range of knowledge allows Brooks to make myriad connections and to cast a wider net, as it were, around his topic, finding resonances in many places."—Stephan Delbos, Prague Post

"Elegant and provocative, Enigmas of Identity offers new insights into the questions and clues about who we think we are."—World Book Industry

"Brooks's aim—to enrich his reader's thinking about identity—was certainly fulfilled for this reader, and should be for anyone who has a broad education including the literary territory which the book takes for granted. Readers with a different background, such as my students, might find Brooks's approach rambling and elitist. Let us be thankful that there is still room in publishing today for such a rewarding elitist ramble."—John Joseph, European Legacy

"An extremely provocative exploration of the myriad complexities of the act of investigating identity, both as a conceptual category and as a lived and perceived phenomenon. I found especially useful Brooks's emphasis on a crucial paradox: one identity does the investigating while the other is investigated, and yet both are ostensibly part of the same entity."—David Shields, author of Reality Hunger: A Manifesto

"Peter Brooks's Enigmas of Identity is a tour de force of dazzling erudition and insight drawing on his encyclopedic knowledge of Western literature and cultural history. It is so gripping that one would like to read it in one sitting, but soon realizes that it demands thoughtful study and reflection."—Louis Begley, author of Why the Dreyfus Affair Matters

"Peter Brooks has written a splendid meditation on the search for the self: erudite, illuminating, and eloquent. He shows how this search leads to an obsessive focus on markers of identity and stories of imposture. Rousseau, Balzac, Stendhal, Proust, and Freud are central interlocutors, but Brooks makes reference to a wide range of other texts, and deftly weaves developments in U.S. law into his discussion."—Martha C. Nussbaum, author of Not for Profit: Why Democracy Needs the Humanities

"Enigmas of Identity is an inviting guided tour through the literary and legal contours of the 'identity paradigm' of modernity. Peter Brooks takes new directions on a topic that will interest literary and legal scholars as well as psychologists and philosophers. Moving skillfully from legal decisions to literary texts, he offers many interpretive gems along the way."—Eric Slauter, University of Chicago