A comprehensive history of manhunting in the West, from ancient times to the present 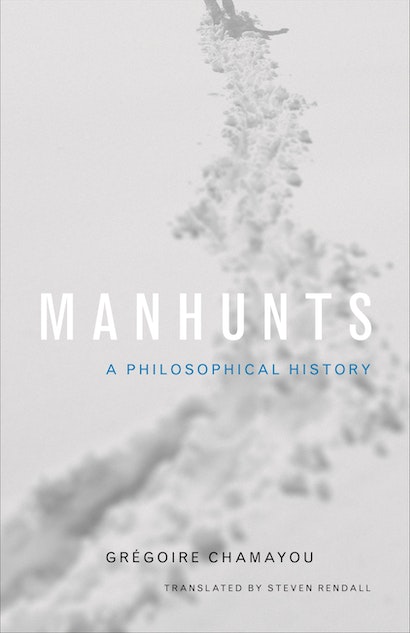 Touching on issues of power, authority, and domination, Manhunts takes an in-depth look at the hunting of humans in the West, from ancient Sparta, through the Middle Ages, to the modern practices of chasing undocumented migrants. Incorporating historical events and philosophical reflection, Grégoire Chamayou examines the systematic and organized search for individuals and small groups on the run because they have defied authority, committed crimes, seemed dangerous simply for existing, or been categorized as subhuman or dispensable.

Chamayou begins in ancient Greece, where young Spartans hunted and killed Helots (Sparta’s serfs) as an initiation rite, and where Aristotle and other philosophers helped to justify raids to capture and enslave foreigners by creating the concept of natural slaves. He discusses the hunt for heretics in the Middle Ages; New World natives in the early modern period; vagrants, Jews, criminals, and runaway slaves in other eras; and illegal immigrants today. Exploring evolving ideas about the human and the subhuman, what we owe to enemies and people on the margins of society, and the supposed legitimacy of domination, Chamayou shows that the hunting of humans should not be treated ahistorically, and that manhunting has varied as widely in its justifications and aims as in its practices. He investigates the psychology of manhunting, noting that many people, from bounty hunters to Balzac, have written about the thrill of hunting when the prey is equally intelligent and cunning.

Grégoire Chamayou is a research scholar in philosophy at the Centre National de la Recherche Scientifique in Paris.

"Manhunts is an unusual and stimulating essay. . . . The strength of the book lies in its refusal to treat manhunting as a metaphor. Chamayou instead focuses on the concrete violence of predation, tracking, banishment, captivity, confinement, and the murderousness that goes along with them."—Jean Berard, Books and Ideas

"Easily accessible despite being packed with multi-facetted philosophical discussions and layers of archival treasures. . . . I read the book in what seemed like a single, long, fascinated breath."—Gitte du Plessis, Theory & Event

"'Man, wolf to man?' Brecht asked the question, Chamayou provides a brilliant and terrifying answer."—Mike Davis, author of City of Quartz and Planet of Slums

"From manhunting for sport in the Occident to the global search for 'illegal aliens' in the twenty-first century, this book offers a history of humans' preying on other human beings. Applying the rubric of hunting to contemporary debates about illegal migrants, Chamayou shows that the supposedly newest hunt refreshes an old motif. A provocative take on a topic of great currency."—Jimmy Casas Klausen, University of Wisconsin-Madison