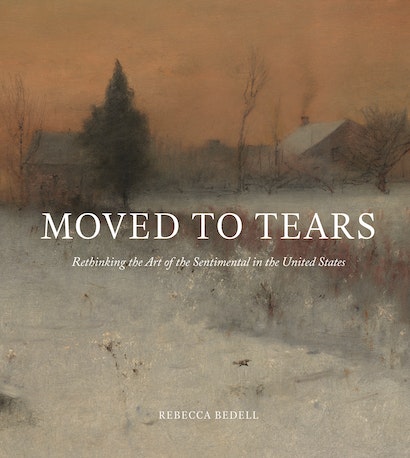 In Moved to Tears, Rebecca Bedell overturns received ideas about sentimental art. Countering its association with trite and saccharine Victorian kitsch, Bedell argues that major American artists—from John Trumbull and Charles Willson Peale in the eighteenth century and Asher Durand and Winslow Homer in the nineteenth to Henry Ossawa Tanner and Frank Lloyd Wright in the early twentieth—produced what was understood in their time as sentimental art. This was art intended to develop empathetic bonds and to express or elicit social affections, including sympathy, compassion, nostalgia, and patriotism.

Much sentimental art of this era was animated by and invested with socially transformative ambitions. Trumbull and Peale deployed their sentimental creations in the urgent effort to stabilize the new nation in the wake of the Revolutionary War. Through his work, Tanner opposed the virulent anti-Semitism of fin-de-siècle France. Even artists such as John Singer Sargent and Mary Cassatt, who had absorbed something of modernist disdain for sentimentalism, were aware of its commercial potential and popular appeal and negotiated complex relations with it.

Beautifully illustrated, Moved to Tears transforms our understanding of the nature and influence of sentimental art.

Rebecca Bedell is associate professor of art and chair of the Art Department at Wellesley College. She is the author of The Anatomy of Nature: Geology and American Landscape Painting, 1825–1875 (Princeton). She lives in Cambridge, Massachusetts.

"This is a must-read for art historians, museum curators and those who are studying to enter these fields, as a buyer or a viewer might ask about it after this read (because the subject is particularly communicative)."—Pennsylvania Literary Journal

"Bedell shows how subtly and certainly sentimentalism pervades the work of nineteenth-century American artists. She shows that sentimentalism, by pulling on heartstrings, by creating sympathetic ties, was a force that artists used to their own ends as they went about their work of making appealing art. "—Karen Zukowski, Nineteenth Century

“An important contribution to American art history, Moved to Tears focuses our attention on a hugely critical element—the sentimental—that dominated the production and reception of art until the success of modernist art around 1900. Beautifully written, Bedell’s case is well-made and irrefutable, and stands as a correction to our tendencies to disregard or devalue the emotional elements of nineteenth-century art.” —Bruce Robertson, author of Marsden Hartley

“This stunningly original and ambitious book seeks to rehabilitate, revise, and complicate our ideas about the sentimental and its place in American art and culture, from the late eighteenth century to the early twentieth. Bedell’s scope is broad and her research is thorough and meticulous. Fresh, bold, and gorgeously written, Moved to Tears will provoke a great deal of discussion.”—Sarah Burns, author of Painting the Dark Side