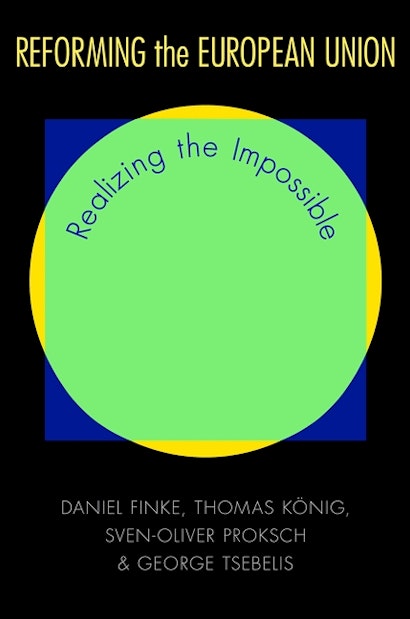 For decades the European Union tried changing its institutions, but achieved only unsatisfying political compromises and modest, incremental treaty revisions. In late 2009, however, the EU was successfully reformed through the Treaty of Lisbon. Reforming the European Union examines how political leaders ratified this treaty against all odds and shows how this victory involved all stages of treaty reform negotiations — from the initial proposal to referendums in several European countries.


The authors emphasize the strategic role of political leadership and domestic politics, and they use state-of-the-art methodology, applying a comprehensive data set for actors’ reform preferences. They look at how political leaders reacted to apparent failures of the process by recreating or changing the rules of the game. While domestic actors played a significant role in the process, their influence over the outcome was limited as leaders ignored negative referendums and plowed ahead with intended reforms. The book’s empirical analyses shed light on critical episodes: strategic agenda setting during the European Convention, the choice of ratification instrument, intergovernmental bargaining dynamics, and the reaction of the German Council presidency to the negative referendums in France, the Netherlands, and Ireland.

"This theoretically rich and empirically driven study by Finke, Konig, Proksch, and Tseblis continues the scholarly discussion on the institutional reforms within the EU."—Choice

"This book is an achievement in terms of the application of formal models and the collection of new data."—Erik Jones, Survival

"[T]his is a smart, sophisticated analysis that contains much to admire. There can be no doubt that Reforming the European Union is a great book that all students of treaty revisions in the EU will have to read and engage with."—Mareike Kleine, Review of International Organisation

"[T]his is an excellent book for students of EU politics, particularly for those who want to understand EU Treaty change. The book would also be useful for students of political science in general concerning its up to date methods, which can also be rigorously applied in certain domestic settings."—Senem Aydin-Duzgit, Insight Turkey

"Using an impressive range of sources, methods, and data, this work is a remarkable, detailed, and comprehensive description and analysis of the complex process of European reform."—Gary Marks, University of North Carolina, Chapel Hill

"European Union treaties set the power relationships among actors and establish the standards that the Union will enjoy in the future, so their design is as important as many of the world's constitutions. This book convincingly describes and explains how the Treaty of Lisbon came into force despite what seemed at the time like an endless series of negotiations, perceived dead ends, and failed referenda. It is easily the best book on the making of Europe—and European treaties—in quite a long time."—Mark Hallerberg, Hertie School of Governance

"Through theoretical and analytical interpretation of an extraordinary collection of original data, this book addresses the important and complicated process of treaty reform in the European Union. Novel and exemplary, it explores constitutional reform, the art of political manipulation, and the empirical study of bargaining. A major achievement."—Matthew Gabel, Washington University in St. Louis

"This excellent book will command a wide audience in EU politics, comparative politics, and international relations. The book's theoretical ideas, derived from rational choice institutionalism, are at the cutting edge of modern political science, its empirical methods are highly innovative, and the normative implications about the future of the European Union are significant."—Simon Hix, London School of Economics and Political Science