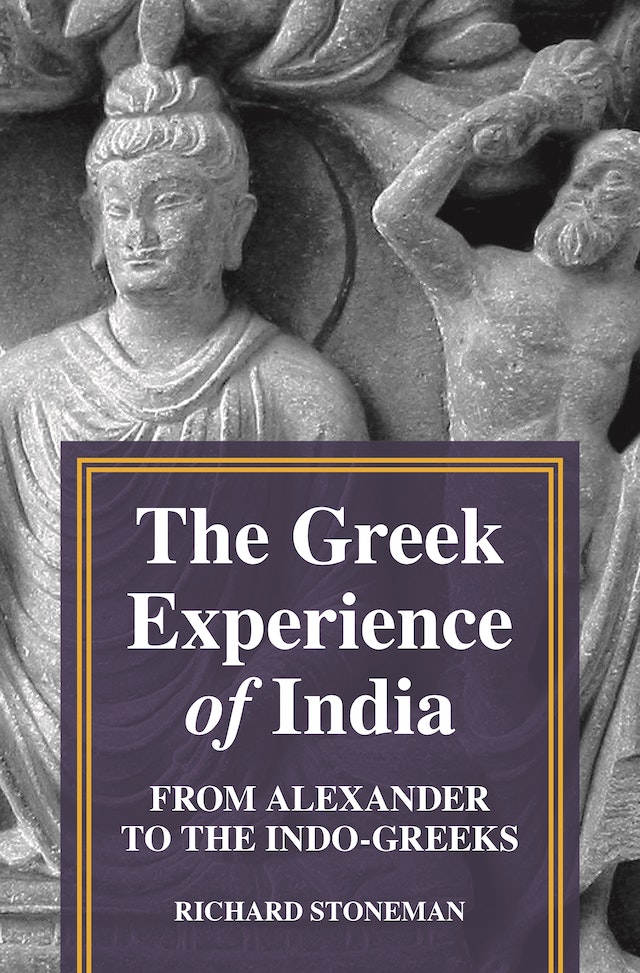 When the Greeks and Macedonians in Alexander’s army reached India in 326 BCE, they entered a new and strange world. They knew a few legends and travelers’ tales, but their categories of thought were inadequate to encompass what they witnessed. The plants were unrecognizable, their properties unknown. The customs of the people were various and puzzling. While Alexander’s conquest was brief, ending with his death in 323 BCE, the Greeks would settle in the Indian region for the next two centuries, forging an era of productive interactions between the two cultures. The Greek Experience of India explores the various ways that the Greeks reacted to and constructed life in India during this fruitful period.

From observations about botany and mythology to social customs, Richard Stoneman examines the surviving evidence of those who traveled to India. Most particularly, he offers a full and valuable look at Megasthenes, ambassador of the King Seleucus to Chandragupta Maurya, and provides a detailed discussion of Megasthenes’ now-fragmentary book Indica. Stoneman considers the art, literature, and philosophy of the Indo-Greek kingdom and how cultural influences crossed in both directions, with the Greeks introducing their writing, coinage, and sculptural and architectural forms, while Greek craftsmen learned to work with new materials such as ivory and stucco and to probe the ideas of Buddhists and other ascetics.

Relying on an impressively wide variety of sources from the Indian subcontinent, The Greek Experience of India is a masterful account of the encounters between two remarkable civilizations.

Richard Stoneman is an honorary visiting professor in the Department of Classics and Ancient History at the University of Exeter. He is also a consulting editor in classics for I. B. Tauris. His many books include The Ancient Oracles and Alexander the Great: A Life in Legend.

"The question of what influences Greeks and Indians might have had on each other in the centuries that followed Alexander the Great is one that has always simultaneously fascinated and frustrated historians – so huge gratitude is due to Stoneman for shedding as much light on the issue as anyone is ever likely to do."—Tom Holland, BBC History Magazine

"Excellent, and very readable. . . . The Greek Experience of India is the best book ever written on ancient Greek relations with India, and ought to be required reading for global historians of any era."—Peter Thonemann, Times Literary Supplement

"This is a magisterial work with plenty to complement and enrich the writings of those like W.W. Tarn, A.K. Narain and Jean W. Sedlar."—Stephen Kern, Classics for All

"The question of what influences Greeks and Indians might have had on each other in the centuries that followed Alexander the Great is one that has always simultaneously fascinated and frustrated historians – so huge gratitude is due to Stoneman for shedding as much light on the issue as anyone is ever likely to do."—Tom Holland, BBC History Magazine

"[Stoneman has] such a direct narrative skill that the casual reader will hardly realise this is a solid scholarly thesis. This is an excellent introduction to the relevant source materials and their authors, and destined to be a valued reference."—Bob Rickard, Fortean Times

"Drawing on a vast array of research, [Stoneman] has compiled a magisterial overview of 'the Indo-Greek era', beginning with Alexander’s crossing of the Hindu Kush mountain range in 327 BC and ending with the severing of contact about three centuries later. [The Greek Experience of India is an] intriguing and valuable book."—James Romm, New York Review of Books

“This valuable and significant book reexamines the Greeks’ experience and perceptions of India in the years from the conquests of Alexander the Great to those of Menander. With an elegant and open style, Richard Stoneman assesses a wider range of relevant Indian materials than previous writers. This book is a major achievement.”—Robin Lane Fox, University of Oxford

“Clear and accessible, this book explores aspects of the Greek experience in India, from recorded encounters to artistic and cultural manifestations. With insightful and much-needed commentary, The Greek Experience of India is a significant contribution to the field, not least because it is the best modern introduction to Megasthenes.”—Sushma Jansari, British Museum

“Richard Stoneman has written an amazing book about the Greek experience of India. Based on a lifetime of learning, this work brings together critical analysis, historical erudition, and personal reportage with great dexterity. It will be consulted by scholars for years to come.”—Phiroze Vasunia, University College London