The essential guide to the life, thought, and legacy of Adam Smith 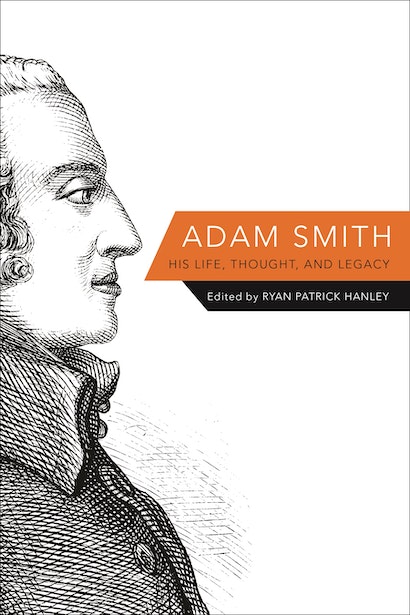 Adam Smith (1723–90) is perhaps best known as one of the first champions of the free market and is widely regarded as the founding father of capitalism. From his ideas about the promise and pitfalls of globalization to his steadfast belief in the preservation of human dignity, his work is as relevant today as it was in the eighteenth century. Here, Ryan Hanley brings together some of the world’s finest scholars from across a variety of disciplines to offer new perspectives on Smith’s life, thought, and enduring legacy.

Contributors provide succinct and accessible discussions of Smith’s landmark works and the historical context in which he wrote them, the core concepts of Smith’s social vision, and the lasting impact of Smith’s ideas in both academia and the broader world. They reveal other sides of Smith beyond the familiar portrayal of him as the author of the invisible hand, emphasizing his deep interests in such fields as rhetoric, ethics, and jurisprudence. Smith emerges not just as a champion of free markets but also as a thinker whose unique perspective encompasses broader commitments to virtue, justice, equality, and freedom.

An essential introduction to Adam Smith’s life and work, this incisive and thought-provoking book features contributions from leading figures such as Nicholas Phillipson, Amartya Sen, and John C. Bogle. It demonstrates how Smith’s timeless insights speak to contemporary concerns such as growth in the developing world and the future of free trade, and how his influence extends to fields ranging from literature and philosophy to religion and law.

Ryan Patrick Hanley holds the Mellon Distinguished Professorship in Political Science at Marquette University. He is the author of Adam Smith and the Character of Virtue and the editor of the Penguin Classics edition of Adam Smith's The Theory of Moral Sentiments.

"Just in case you thought Adam Smith . . . was simply the father of modern economics, this book is a weighty reminder of the scope and ambition of his intellectual project."—Jane Fuller, Financial World

"An excellent and very useful compendium of every conceivable aspect of modern scholarship's understanding of the life and work of the author of The Wealth of Nations."—Chronicles

"Hanley has assembled an excellent collection of essays on the life and work of Adam Smith. Thirty-two Smith scholars from philosophy, economics, history, political science, English, and law contribute insightful and accessible chapters exploring Smith's social vision and its relevance in various contexts over time. . . . Overall, it would be hard to find a more balanced, comprehensive, and well-documented presentation of Smith's role in forwarding Enlightenment thinking from 18th-century Europe to China in recent decades. There is much in these essays for both seasoned Smith followers and those new to his work."—Choice

"By including dozens of authors from a variety of perspectives, Hanley has put together a deep, thoughtful, and expansive volume examining Adam Smith, his works, his ideas, and his influence on the world up to today."—Paul Mueller, EH.net

"This wide-ranging collection is indispensable for Smith scholars and anyone interested in his works. . . . Scholarship on Smith has grown considerably in the last twenty years, and this collection is a welcome addition to this exciting area of research."—Review of Metaphysics

""No matter what part of the book it is to which readers turn for a succinct account, or dip into more casually, they will be informed and enlightened."—Christopher J. Berry, Journal of Scottish Philosophy

"The lively and lucid writing styles and the variety of themes and topics presented in the book are bound to invite the tourist to look further, while the variety of topics on offer will draw seasoned travelers to explore by-ways they might have missed on earlier voyages into Smith territory."—Sarah Otten, International Dialogue

"Adam Smith: His Life, Thought, and Legacy is a signal contribution to engaging the work and significance of a formative figure both in the history of Western civilization as well as for its future. The volume’s editor, the contributors, and the publisher are to be commended for providing such valuable service."—Jordan J. Ballor, Journal of Markets & Morality

"This brilliantly conceived collection brings together leading scholars from a variety of disciplines and walks of life to reflect on Adam Smith's life, thought, influence, and legacy. There is a great deal of value here to both the novice and seasoned scholar. This volume is now the best companion to reading Adam Smith."—Jerry Z. Muller, author of Adam Smith in His Time and Ours: Designing the Decent Society

"This book provides an up-to-date guide to the entire range and breadth of Adam Smith's work, life, and influence. It weaves across disciplines and genres, providing a compendious account and covering all possible bases."—Duncan Kelly, author of The Propriety of Liberty