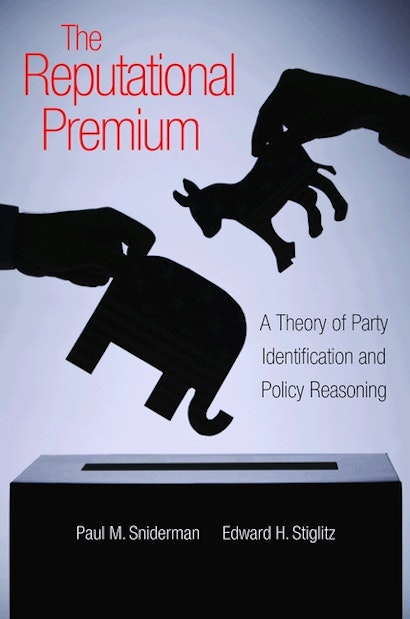 The Reputational Premium presents a new theory of party identification, the central concept in the study of voting. Challenging the traditional idea that voters identify with a political party out of blind emotional attachment, this pioneering book explains why party identification in contemporary American politics enables voters to make coherent policy choices.


Standard approaches to the study of policy-based voting hold that voters choose based on the policy positions of the two candidates competing for their support. This study demonstrates that candidates can get a premium in support from the policy reputations of their parties. In particular, Paul Sniderman and Edward Stiglitz present a theory of how partisans take account of the parties’ policy reputations as a function of the competing candidates’ policy positions.


A central implication of this theory of reputation-centered choices is that party identification gives candidates tremendous latitude in their policy positioning. Paradoxically, it is the party supporters who understand and are in synch with the ideological logic of the American party system who open the door to a polarized politics precisely by making the best-informed choices on offer.

"The book is succinct and will therefore appeal to students in upper-level undergraduate and graduate courses on political behaviour and US politics. The book is the first in a long while to take a fresh look at the concept of party identification, therefore a must read for scholars conducting research on elections and voting. Given the centrality of party identification to understanding US politics, this book is recommended to scholars engaged in all areas of study in US government and politics."—Choice

"The Reputational Premium dramatically advances the study of political parties and vote choice. Sniderman and Stiglitz provide a powerful new theory of party identification that helps make sense of a central puzzle in contemporary American politics: how polarized political parties can thrive alongside a far more moderate electorate."—Eric Schickler, University of California, Berkeley

"The Reputational Premium offers a new theory of partisanship in the United States. The premium of the title is that party identification carries meaning in a polarized era, giving it a substantive, ideological base, as well as an emotional identity. As a piece of serious science, the book provides not only a clear, original theory but striking and convincing tests of its implications. This will change the terms of the debate."—John Aldrich, Duke University

In this long-overdue rethinking of one of the discipline's oldest and most cherished concepts, Sniderman and Stiglitz set forth a new theory of party identification that explains how and why the reputations of political parties matter. They contend that parties are a source of policy information for voters rather than strictly an engine of habitual or attachment-driven political decision making. This book will become the landmark statement of a new theory of partisanship in political science."—Diana C. Mutz, University of Pennsylvania

"This is the most important book on parties and policy opinions in decades. It should be required reading for anyone interested in how democracies function and the role of citizens in that process."—Jamie Druckman, Northwestern University

"The Reputational Premium is a major substantive breakthrough. Sniderman and Stiglitz escape the chronic dispute about the comparative role of party identification and issue preference by taking it somewhere much more productive. My bet is that this book will quickly become a must-read for those who work at the center of the American politics syllabus."—Byron E. Shafer, coauthor of The American Public Mind: The Issues Structure of Mass Politics in the Postwar United States

"The Reputational Premium demonstrates that most partisans know and agree with their party's overall position on issues, and that they are loyal to their party when the party's candidate takes a position on the issues that the voter expects. This book will generate a strong tremor in studies of party identification and provoke new lines of research."—Dean Lacy, Dartmouth College