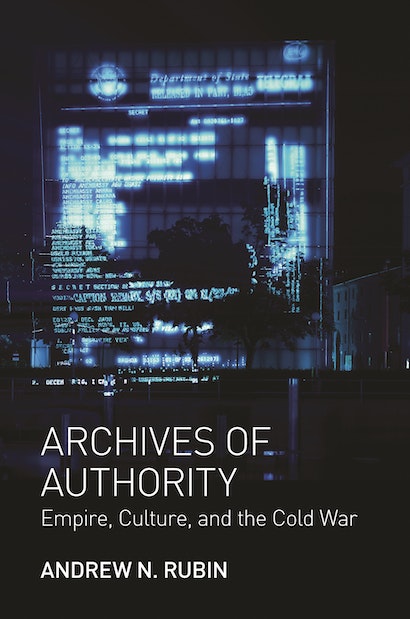 Combining literary, cultural, and political history, and based on extensive archival research, including previously unseen FBI and CIA documents, Archives of Authority argues that cultural politics — specifically America’s often covert patronage of the arts — played a highly important role in the transfer of imperial authority from Britain to the United States during a critical period after World War II. Andrew Rubin argues that this transfer reshaped the postwar literary space and he shows how, during this time, new and efficient modes of cultural transmission, replication, and travel — such as radio and rapidly and globally circulated journals — completely transformed the position occupied by the postwar writer and the role of world literature.


Rubin demonstrates that the nearly instantaneous translation of texts by George Orwell, Thomas Mann, W. H. Auden, Richard Wright, Mary McCarthy, and Albert Camus, among others, into interrelated journals that were sponsored by organizations such as the CIA’s Congress for Cultural Freedom and circulated around the world effectively reshaped writers, critics, and intellectuals into easily recognizable, transnational figures. Their work formed a new canon of world literature that was celebrated in the United States and supposedly represented the best of contemporary thought, while less politically attractive authors were ignored or even demonized. This championing and demonizing of writers occurred in the name of anti-Communism — the new, transatlantic “civilizing mission” through which postwar cultural and literary authority emerged.

Andrew N. Rubin is assistant professor of English at Georgetown University. He is the coeditor of Adorno: A Critical Reader and The Edward Said Reader.

"Archives of Authority is a valuable and thought-provoking work. . . . Archives of Authority will be of great interest to literature scholars, postcolonial theorists, and Cold War specialists across the disciplines. Its critique of cultural instrumentality and appeal for a Said-inflected humanism speak to the stakes of intellectual inquiry, reminding us that in exposing the process by which an unjust world is made, we arm ourselves with the tools to build a different one."—Kirsten Weld, Journal of Archival Organization

"This is a brilliant and highly original investigation of how Cold War politics shaped the emergence of world literature and new forms of cultural authority, literary consecration, and political surveillance in the aftermath of the Second World War. Eye-opening and provocative, Archives of Authority is indispensable reading for all serious scholars of world literature, Cold War cultural politics, and globalization."—Anne McClintock, University of Wisconsin-Madison

"Examining the period after World War II, when the United States took on an imperial role previously played by Britain, this remarkable book shows the ways in which Western cultural policies, in opposition to Soviet cultural-political efforts, helped literary culture establish certain authors, while excluding others from attention, leading to a new phase of world literature. The research is extensive and impressive."—Jonathan Arac, University of Pittsburgh

"Enacting a kind of literary archaeology, Rubin's illuminating and necessary book traces the administration of literary culture and its shift from Anglo to American imperial power. Systematic without being sensationalistic, Rubin's journey through the archive allows us to see the epochal changes of Cold War culture that are still with us in ever greater relief."—Ammiel Alcalay, CUNY Graduate Center

"This is an exciting exploration of important categories in world literature, a lucid explanation for its rise and fall, and an excellent argument for its careful reconsideration."—Paul Bové, University of Pittsburgh

"Rubin reminds us how the insights of a literary way of thinking to the assessment of geopolitical history are inimitable. This meticulously researched and broad-minded book reopens the terrain of oppositional criticism embedded in a humanist pedagogy during an epoch that perversely fetishizes its own catastrophic anti-intellectualism as resistance."—Stathis Gourgouris, Columbia University

"This rigorous and intrinsically interesting book is the academic equivalent of a Cold War spy novel, replete with intriguing archival findings and the implication of its author in the bureaucratic Kafkaesque structure of CIA document censorship. It is sure to appeal to a wide audience in literature, Cold War history, political science, and law."—Emily Apter, New York University