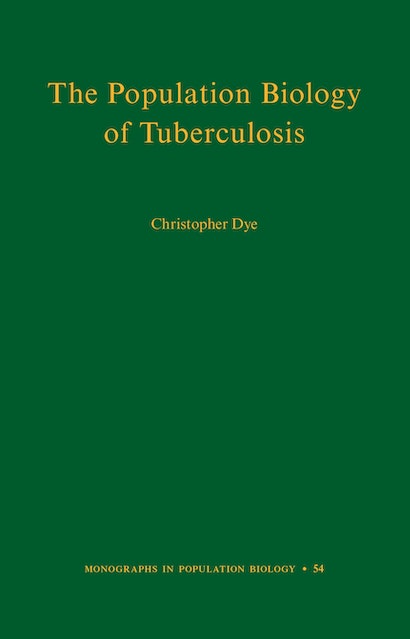 Despite decades of developments in immunization and drug therapy, tuberculosis remains among the leading causes of human mortality, and no country has successfully eradicated the disease. Reenvisioning tuberculosis from the perspective of population biology, this book examines why the disease is so persistent and what must be done to fight it. Treating tuberculosis and its human hosts as dynamic, interacting populations, Christopher Dye seeks new answers to key questions by drawing on demography, ecology, epidemiology, evolution, and population genetics. Dye uses simple mathematical models to investigate how cases and deaths could be reduced, and how interventions could lead to TB elimination.

Dye’s analysis reveals a striking gap between the actual and potential impact of current interventions, especially drug treatment, and he suggests placing more emphasis on early case detection and the treatment of active or incipient tuberculosis. He argues that the response to disappointingly slow rates of disease decline is not to abandon long-established principles of chemotherapy, but to implement them with greater vigor. Summarizing epidemiological insights from population biology, Dye stresses the need to take a more inclusive view of the factors that affect disease, including characteristics of the pathogen, individuals and populations, health care systems, and physical and social environments.

In broadening the horizons of TB research, The Population Biology of Tuberculosis demonstrates what must be done to prevent, control, and defeat this global threat in the twenty-first century.

Christopher Dye is the Director of Strategy in the Office of the Director General at the World Health Organization, Geneva. He has been the Gresham Professor of Physic in London and a visiting professor of zoology at the University of Oxford. His work has appeared in many publications including Science, Nature and The Lancet.

"This is an important book by one of the world's leading experts on tuberculosis. Christopher Dye breaks new ground and uses a novel approach to study how tuberculosis cases and fatalities could be decreased. He demonstrates how certain interventions, energetically pursued, offer the hope that tuberculosis can ultimately be eradicated."—Robert May, University of Oxford

"With formal and persuasive analysis, Dye shows how HIV/AIDS has caused massive increases in the burden of tuberculosis in Africa since the 1980s. But Dye's ultimate message is a hopeful one: current methods of prevention and treatment could, if rigorously implemented, substantially cut mortality rates for both diseases, even within a few years."—Peter Piot, director of the London School of Hygiene and Tropical Medicine

"A major cause of death throughout history, tuberculosis still kills more than a million people every year. This book argues that successful tuberculosis control will depend on a comprehensive strategy combining the most effective technological, policy, and social interventions available. Rooted in quantitative analysis, the book explores factors driving the epidemic in different populations, and offers a novel and comprehensive approach that will help set future priorities."—Mario Raviglione, director of the Global TB Programme, World Health Organization

"Dye's book is essential reading for anyone concerned about how tuberculosis can be eliminated as a major public health problem. A master of modeling, Dye considers the entire range of complexities that influence the dynamics of the disease in multiple countries. He helps us to understand the numerous interventions and 'what ifs' that would make the critical and profound difference in controlling this ancient scourge of mankind."—Barry R. Bloom, Harvard T. H. Chan School of Public Health

"This book is a brilliant rethink of tuberculosis within the context of a rapidly evolving global environment. Dye examines the multifaceted factors of the disease and lays the foundation for a novel approach to tackling it. He challenges the global health community to address TB as a social disease as well as a medical one, and makes the case for a comprehensive and holistic response."—Ariel Pablos-Méndez, U.S. Agency for International Development

"At once informative and captivating, this book is without question the most comprehensive text on the ecology and evolution of tuberculosis, and represents a landmark contribution to the field by one of its most authoritative figures. Painting the most up-to-date picture of tuberculosis from diverse perspectives, Dye lays bare the key intellectual concepts and, in a wonderfully elegant and compelling manner, examines their conclusions. A pleasure to read."—Pejman Rohani, University of Michigan

"This is a hugely impressive record of Dye's extensive knowledge of the epidemiology and control of human tuberculosis amassed over many years of research and analysis. His book deserves to rank alongside a handful of other seminal tuberculosis studies from the past fifty years. With its global reach and close attention to a wealth of data, this is an authoritative, timely, and valuable contribution to the public health literature."—Mark Woolhouse, University of Edinburgh