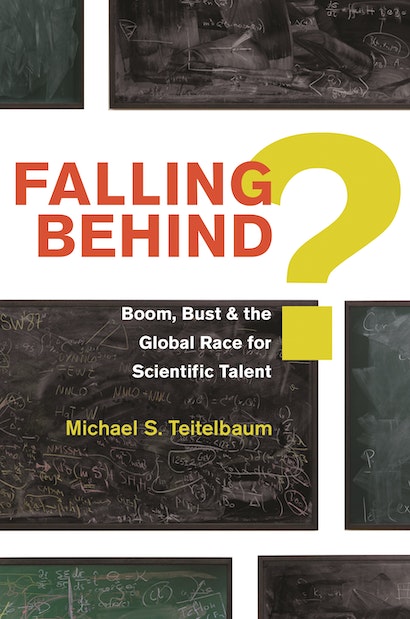 Is the United States falling behind in the global race for scientific and engineering talent? Are U.S. employers facing shortages of the skilled workers that they need to compete in a globalized world? Such claims from some employers and educators have been widely embraced by mainstream media and political leaders, and have figured prominently in recent policy debates about education, federal expenditures, tax policy, and immigration. Falling Behind? offers careful examinations of the existing evidence and of its use by those involved in these debates.

These concerns are by no means a recent phenomenon. Examining historical precedent, Michael Teitelbaum highlights five episodes of alarm about “falling behind” that go back nearly seventy years to the end of World War II. In each of these episodes the political system responded by rapidly expanding the supply of scientists and engineers, but only a few years later political enthusiasm or economic demand waned. Booms turned to busts, leaving many of those who had been encouraged to pursue science and engineering careers facing disheartening career prospects. Their experiences deterred younger and equally talented students from following in their footsteps—thereby sowing the seeds of the next cycle of alarm, boom, and bust.

Falling Behind? examines these repeated cycles up to the present, shedding new light on the adequacy of the science and engineering workforce for the current and future needs of the United States.

Michael S. Teitelbaum is a Wertheim Fellow in the Labor and Worklife Program at Harvard Law School and senior advisor to the Alfred P. Sloan Foundation in New York. Until 2011 he was vice president of the Sloan Foundation. His previous books include The Global Spread of Fertility Decline, A Question of Numbers, The Fear of Population Decline, and The British Fertility Decline.

"[Teitelbaum's] discussion usefully pulls together previous work by him and others that shows that the existing funding model and practices of universities have uncoupled the supply of new scientists from the need for new scientists, particularly in the life sciences. . . . Falling Behind? also illuminates a bigger picture: Scientists must recognize that the solution to low grant acceptance rates and poor job prospects for new scientists is not increased public funding for research."—Adam B. Jaffe, Science

"[A]n outstanding and important new book. . . . Falling Behind? . . . brings desperately needed clarity and context to a crucial issue: the nation's much-ballyhooed but essentially fictitious 'shortage' of scientific talent. Drawing on Teitelbaum's decades of experience with labor and migration issues . . . the book applies subtle analysis and encyclopedic knowledge to the task of understanding the dynamics of the scientific labor market. . . . Every politician, policymaker, advocate, and ordinary citizen who wants to understand the reality and the genuine challenges currently facing American research and researchers . . . should read and absorb what Teitelbaum terms as his book's 'core findings'. . . . Fascinating and revealing nuggets stud the book, displaying the depth and originality of Teitelbaum's research. . . . A review of this length can offer only a taste of the insight, information, and astute judgment that Teitelbaum brings to bear on the history, structure, prospects, and very real current problems of the U.S. scientific enterprise. . . . [T]he book's precise exposition and granular detail make it valuable even for those who already are well versed. For the much larger number of people who are concerned about American science but unfamiliar with the dynamics and history of the scientific labor market, this book will be revelatory . . . Teitelbaum's book should transform this important national conversation."—Beryl Lieff Benderly, Science Careers

"Well-researched . . . Teitelbaum begins Falling Behind by examining the many hyperbolic claims of the current so-called science, technology, engineering, and mathematics (STEM) crisis. He expertly dissects these assertions and clearly demonstrates the weak assumptions and sloppy reasoning underlying each. . . . Especially useful is the light Teitelbaum shines on the many financial and political incentives that motivate industry, academia and government to proclaim an engineering and science crisis. . . . A very useful addition to the science and engineering crisis literature."—Robert N. Charette, IEEE Spectrum

"Teitelbaum shows how the U.S. government's science and technology policy has been marked by groundless scares, nonsensical rhetoric, interest-group politics, stop-and-go instability, and misaligned incentives. He does this in a well-documented, restrained, academic way, which gives much weight to his stringent criticisms."—Pierre Lemieux, Regulation Magazine

"Readers with interests in science policy, careers or funding will find this book fascinating, although often disquieting. Teitelbaum's analyses of historical alarm/boom/bust cycles and (in particular) the NIH budget-doubling brouhaha are illuminating, and he has a knack for anticipating potential criticisms."—Margaret Harris, Physics World

"The book provides an interesting history of US science and engineering workforce studies and actions, and sensible recommendations and principles given the ever-changing workforce."—Deborah Stine, Chemistry World

"Despite policy differences that readers may have with Teitelbaum, the concerns he raises about booms and busts in the scientific workforce (due in large part to failures of public policy) should command broad interest."—Daniel Kuehn, Cato Journal

"Detailing the varied interests driving science and engineering workforce policy, Falling Behind? demonstrates that unfortunately, scores of high-skilled workers have been on the losing end of failed education and immigration agendas. This book provides critical analysis and an opportunity to change the dialogue for these issues."—Paul E. Almeida, DPE AFL-CIO

"Teitelbaum presents an insightful and engaging history of the events and forces behind the boom-and-bust cycles experienced by America's scientific workforce, while analyzing the policies and politics behind them and the connection to contemporary debates over high-skilled immigration. Falling Behind? makes it clear there has been scant evidence to support the alarming claims of labor shortages in scientific occupations made over the past six decades."—Daniel Costa, Economic Policy Institute

"Filled with fascinating anecdotes and information about U.S. policy toward the science and engineering workforce, this powerful book shows that officials, industry lobbyists, and leading members of the scientific establishment have time and again tried to make the case that the United States needs more scientists and engineers when there is no evidence of this. With verve and clarity, Falling Behind? raises the level of discourse on science workforce issues."—Richard Freeman, Harvard University

"Falling Behind? brings balance to the argument often put forward by special interest groups that the United States faces a shortage of scientists and engineers. It addresses the propensity of American interest groups to declare a crisis regarding the size and competency of the technical workforce, the government's response to such declarations, and the ensuing results. This book offers a refreshing and unique perspective."—Paula Stephan, Georgia State University and the National Bureau of Economic Research