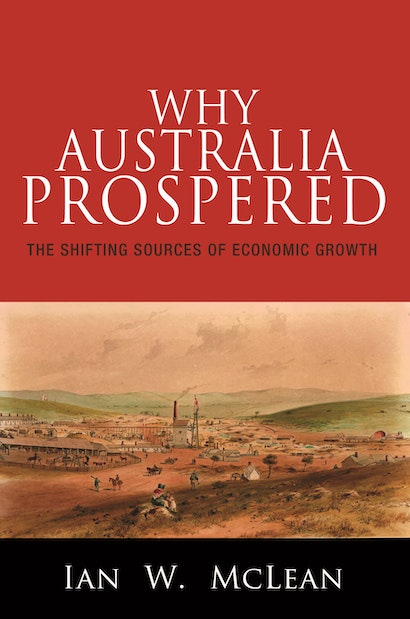 This book is the first comprehensive account of how Australia attained the world’s highest living standards within a few decades of European settlement, and how the nation has sustained an enviable level of income to the present. Why Australia Prospered is a fascinating historical examination of how Australia cultivated and sustained economic growth and success. Beginning with the Aboriginal economy at the end of the eighteenth century, Ian McLean argues that Australia’s remarkable prosperity across nearly two centuries was reached and maintained by several shifting factors. These included imperial policies, favorable demographic characteristics, natural resource abundance, institutional adaptability and innovation, and growth-enhancing policy responses to major economic shocks, such as war, depression, and resource discoveries.


Natural resource abundance in Australia played a prominent role in some periods and faded during others, but overall, and contrary to the conventional view of economists, it was a blessing rather than a curse. McLean shows that Australia’s location was not a hindrance when the international economy was centered in the North Atlantic, and became a positive influence following Asia’s modernization. Participation in the world trading system, when it flourished, brought significant benefits, and during the interwar period when it did not, Australia’s protection of domestic manufacturing did not significantly stall growth. McLean also considers how the country’s notorious origins as a convict settlement positively influenced early productivity levels, and how British imperial policies enhanced prosperity during the colonial period. He looks at Australia’s recent resource-based prosperity in historical perspective, and reveals striking elements of continuity that have underpinned the evolution of the country’s economy since the nineteenth century.

Ian W. McLean is a visiting research fellow in economics at the University of Adelaide, where he taught for many years.

"[R]emarkable. . . . Why Australia Prospered distills decades of research and teaching to present an account of Australia and its development that is solid, surprising and pertinent to the contemporary debate about the country's future. . . . In his assembly of evidence and his judicious review of the debates of Australian development, McLean has made a profoundly important contribution to our understanding of where Australia has come from as a nation, where they country is now—and where it is going."—Australian Financial Review

"In this impressive book McLean demonstrates the contribution economic history can make to scholarship on the past and the politics of the present. . . . [T]he work of a manifestly fine scholar with many important points to make and ideas that need to be heard far beyond university economics departments, or what's left of them."—Stephen Matchett, Australian

"[A]n outstanding piece of scholarship. . . . Ian McLean has written a timely and masterful account of the long sweep of Australia's economic history, which will be relished by anyone interested in the unique circumstances of this country's remarkable economic development. Written for the non-specialist, the narrative is accessible, brisk and appropriately, if sparsely, illustrated with charts and tables."—Ian Harper, EH.Net

"[T]his is a superb book. Anyone with even a superficial interest in Australian economic history should read it, and be educated by it."—Tim Hatton, Australian Economic History Review

"Why Australia Prospered is both expansively ambitious and narrowly precise. . . . McLean is a meticulous analyst and a calm judge, comfortable with unorthodoxy and big turning points if that is where the evidence leads."—Jock Given, Inside Story

"McLean's telling of Australian economic history is not only fascinating, it is also fresh. . . . [It is] a book that better integrates Australia's story into mainstream economic history than any before it."—Andrew Leigh, Journal of Economic Literature

"It is engagingly written. . . . Most important of all is McLean's impressive use of the comparative approach. . . . While the book's focus is on natural resources and institutions, the author provides stimulating interpretations of many phases of economic history."—Simon Ville, American Historical Review

"Why Australia Prospered is a rewarding read. The book is targeted at a broad audience, and to this end, MacLean interweaves historical narrative with analysis. Its chronological presentation allows some refreshing perspectives on events, and theoretical and policy debates, all of which are informed by the deep scholarship that the author demonstrates. . . . [T]his is an excellent and enjoyable book that reminds us of the importance of historical context."—Shauna Phillips, Australian Journal of Agricultural and Resource

"Australian economic history is undergoing something of a minor revival . . . and this book is a welcome addition to the literature on the history of Australia in the global economy, stressing as it does both continuity and change."—David Meredith, English Historical Review

"Looking at a period spanning two hundred years, this book explores why Australia was so rich at the end of the nineteenth century and why it has remained rich. McLean shows how history sheds light on Australia's long-run economic performance and he cogently discusses the contributions and limitations of formal theory in explaining Australian growth."—George Grantham, professor emeritus, McGill University

"This exceptionally well-written book explains why Australia has been almost continuously prosperous since the first settlement. A truly deep study of the mechanisms of economic growth, it is a top-rate contribution to its field and will become the standard work on Australian economic history."—Eric Jones, professor emeritus, La Trobe University