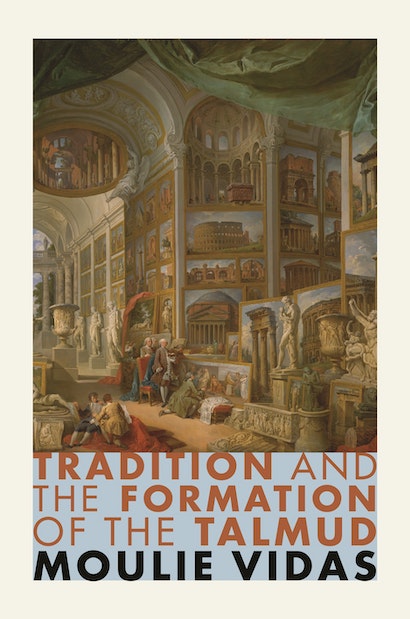 Tradition and the Formation of the Talmud offers a new perspective on perhaps the most important religious text of the Jewish tradition. It is widely recognized that the creators of the Talmud innovatively interpreted and changed the older traditions on which they drew. Nevertheless, it has been assumed that the ancient rabbis were committed to maintaining continuity with the past. Moulie Vidas argues on the contrary that structural features of the Talmud were designed to produce a discontinuity with tradition, and that this discontinuity was part and parcel of the rabbis’ self-conception. Both this self-conception and these structural features were part of a debate within and beyond the Jewish community about the transmission of tradition.

Focusing on the Babylonian Talmud, produced in the rabbinic academies of late ancient Mesopotamia, Vidas analyzes key passages to show how the Talmud’s creators contrasted their own voice with that of their predecessors. He also examines Zoroastrian, Christian, and mystical Jewish sources to reconstruct the debates and wide-ranging conversations that shaped the Talmud’s literary and intellectual character.

Moulie Vidas is an assistant professor in the Department of Religion and the Program in Judaic Studies at Princeton University.

"Vidas's book exemplifies the best possibilities of contemporary Talmud scholarship—a foretaste, in just those moments when it upsets received wisdom about the Talmud, of the next step in the ancient dance of new and old."—Raphael Magarik, MAKE Literary Productions

"Vidas's book is eloquent testimony to the high level of conceptual sophistication that has been achieved in the academic field of Talmud study in recent years. It bodes well for the future of the field in American academia."—Pinchas Roth, AJL Newsletter

"In recent years, scholars have come to see the Talmud as the product of much more than editorial effort in late antiquity—that its building blocks were constructed into an edifice only toward the end of the document's production. Vidas moves beyond this to argue that even the distinction between building blocks and the text's construction is a result of the editors, thus entirely upsetting the applecart of possible chronological differences between layers of the text. Vidas's work is stimulating, troubling, and thrilling."—Daniel Boyarin, University of California, Berkeley

"One of the most important trends in Talmud scholarship of the past half century is the recognition of the anonymous editorial hand. It is difficult to overestimate the significance of Vidas's argument: that this editorial hand knowingly puts forth an active, innovative voice for itself, rather than one that is passive and muted. A wonderful piece of scholarship."—Azzan Yadin-Israel, Rutgers University

"This book is an original and valuable contribution to the understanding of the Talmud and its making. Presenting an excellent combination of solid philology with a larger cultural and historical context, it will be of great interest to scholars of the Talmud, as well as to scholars in other fields grappling with the complexities of tradition and innovation."—Moshe Halbertal, New York University School of Law and Hebrew University