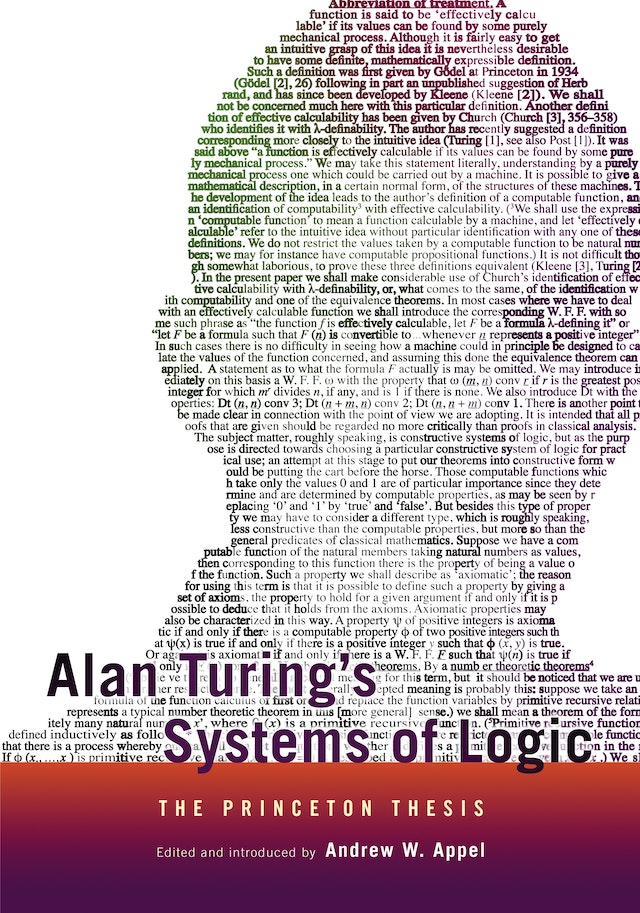 Between inventing the concept of a universal computer in 1936 and breaking the German Enigma code during World War II, Alan Turing (1912–1954), the British founder of computer science and artificial intelligence, came to Princeton University to study mathematical logic. Some of the greatest logicians in the world—including Alonzo Church, Kurt Gödel, John von Neumann, and Stephen Kleene—were at Princeton in the 1930s, and they were working on ideas that would lay the groundwork for what would become known as computer science. This book presents a facsimile of the original typescript of Turing’s fascinating and influential 1938 Princeton PhD thesis, one of the key documents in the history of mathematics and computer science. The book also features essays by Andrew Appel and Solomon Feferman that explain the still-unfolding significance of the ideas Turing developed at Princeton.

A work of philosophy as well as mathematics, Turing’s thesis envisions a practical goal—a logical system to formalize mathematical proofs so they can be checked mechanically. If every step of a theorem could be verified mechanically, the burden on intuition would be limited to the axioms. Turing’s point, as Appel writes, is that “mathematical reasoning can be done, and should be done, in mechanizable formal logic.” Turing’s vision of “constructive systems of logic for practical use” has become reality: in the twenty-first century, automated “formal methods” are now routine.

Presented here in its original form, this fascinating thesis is one of the key documents in the history of mathematics and computer science.

Andrew W. Appel is the Eugene Higgins Professor and Chairman of the Department of Computer Science at Princeton University.

"For me, this is the most interesting of Alan Turing's writings, and it is a real delight to see a facsimile of the original typescript here. The work is packed with ideas that have turned out to be significant for all sorts of current research areas in computer science and mathematics."—Barry Cooper, University of Leeds