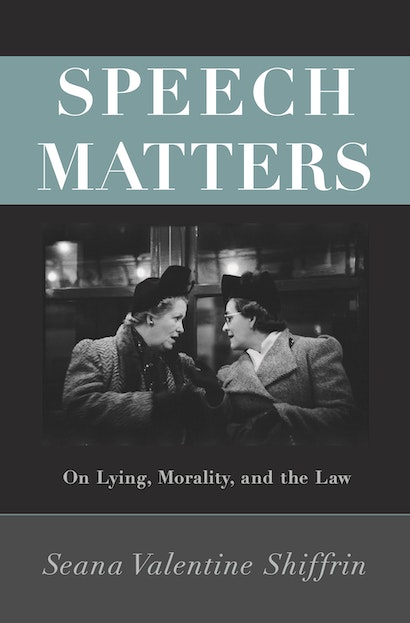 To understand one another as individuals and to fulfill the moral duties that require such understanding, we must communicate with each other. We must also maintain protected channels that render reliable communication possible, a demand that, Seana Shiffrin argues, yields a prohibition against lying and requires protection for free speech. This book makes a distinctive philosophical argument for the wrong of the lie and provides an original account of its difference from the wrong of deception.

Drawing on legal as well as philosophical arguments, the book defends a series of notable claims—that you may not lie about everything to the “murderer at the door,” that you have reasons to keep promises offered under duress, that lies are not protected by free speech, that police subvert their mission when they lie to suspects, and that scholars undermine their goals when they lie to research subjects.

Many philosophers start to craft moral exceptions to demands for sincerity and fidelity when they confront wrongdoers, the pressures of non-ideal circumstances, or the achievement of morally substantial ends. But Shiffrin consistently resists this sort of exceptionalism, arguing that maintaining a strong basis for trust and reliable communication through practices of sincerity, fidelity, and respecting free speech is an essential aspect of ensuring the conditions for moral progress, including our rehabilitation of and moral reconciliation with wrongdoers.

Seana Valentine Shiffrin is professor of philosophy and the Pete Kameron Professor of Law and Social Justice at the University of California, Los Angeles.

"In her provocative, densely argued and important new book, philosopher Seana Valentine Shiffrin argues that Kant has been misinterpreted. . . . Shiffrin's concern in the punningly titled Speech Matters is to show how telling the truth is fundamental to maintaining the cherished goal of freedom of speech."—Andrew Hadfield, Times Higher Education

"As compelling defense of sincere communication, Shiffrin's book deserves to be read and contemplated not just by academics interested in the morality of communication, not just by lawyers concerned with the bounds of free speech, but by anyone struggling to define her duties to herself and others in a world awash in lies."—Leslie Kendrick, Harvard Law Review

"This very important book will be mandatory reading for legal scholars interested in duress, for philosophers and others concerned with lying, and for legal, philosophical, and political theorists who examine questions of freedom of speech. Shiffrin's arguments for the individual and community importance of sincerity are novel and effective. Her analysis of lying, her philosophical approach to questions of duress, and her connections between a theory of freedom of speech and the idea of freedom of thought all go beyond the existing literature. This is an impressive work."—Frederick Schauer, University of Virginia

"This book makes a compelling case for the importance of both veracity and freedom of speech for moral agency and progress. Full of insight and with a distinctive moral tone, this is a very significant contribution from one of the field's most distinguished and original participants."—Liam Murphy, New York University