A comprehensive look at how terrorist groups organize themselves 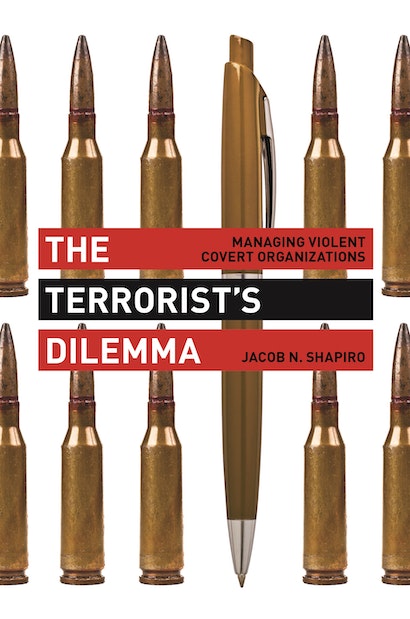 How do terrorist groups control their members? Do the tools groups use to monitor their operatives and enforce discipline create security vulnerabilities that governments can exploit? The Terrorist’s Dilemma is the first book to systematically examine the great variation in how terrorist groups are structured. Employing a broad range of agency theory, historical case studies, and terrorists’ own internal documents, Jacob Shapiro provocatively discusses the core managerial challenges that terrorists face and illustrates how their political goals interact with the operational environment to push them to organize in particular ways.

Shapiro provides a historically informed explanation for why some groups have little hierarchy, while others resemble miniature firms, complete with line charts and written disciplinary codes. Looking at groups in Africa, Asia, Europe, and North America, he highlights how consistent and widespread the terrorist’s dilemma — balancing the desire to maintain control with the need for secrecy — has been since the 1880s. Through an analysis of more than a hundred terrorist autobiographies he shows how prevalent bureaucracy has been, and he utilizes a cache of internal documents from al-Qa’ida in Iraq to outline why this deadly group used so much paperwork to handle its people. Tracing the strategic interaction between terrorist leaders and their operatives, Shapiro closes with a series of comparative case studies, indicating that the differences in how groups in the same conflict approach their dilemmas are consistent with an agency theory perspective.

The Terrorist’s Dilemma demonstrates the management constraints inherent to terrorist groups and sheds light on specific organizational details that can be exploited to more efficiently combat terrorist activity.

Jacob N. Shapiro is associate professor of politics and international affairs at Princeton University and codirects the Empirical Studies of Conflict Project.

"In a unique study, Shapiro explores the management of such groups with considerable rigor, beginning with the nineteenth-century Russian progenitors of contemporary terrorist groups and ending with al Qaeda."—Foreign Affairs

"Shapiro's book offers theoretical insight into the working of covert organizations that removes many cobwebs that cloud our understanding of the phenomenon."—Gayatri Chandrasekaran, Mint

"Ultimately, the terrorist's dilemma that Shapiro is exploring is the divergence between the need for control and order and the equal need for opacity and security within a terrorist organisation. It is unlikely that any such organisation will ever be able to completely resolve this predicament, as by their very nature political movements seek to create parallel governance structures and therefore exactly the sort of managerial bureaucracy that Shapiro sees as their Achilles' heel. By laying out in such detail how this weakness can be exploited, Shapiro is undertaking a task that will likely stand the test of time."—Raffaello Pantucci, RUSI Journal

"[T]he book is well worth the read for the persuasive case that Shapiro makes that policy makers, law-enforcement agents, academics, and the general public would benefit from a greater understanding of terrorist groups as organizations."—Anita M. McGahan, Administrative Science Quarterly

"The Terrorist's Dilemma is one of the most important contributions made to terrorism studies in the past decade."—Barak Mendelsohn, Perspectives on Politics

"The Terrorist's Dilemma expertly incorporates organizational perspectives into the study of terrorism, producing a theoretically insightful and empirically rich work that upends many conventional assumptions. Shapiro proves that differences within the chain of command, management weaknesses, and other problems common to organizations of all stripes plague terrorist groups and offer numerous opportunities to fight them better."—Daniel Byman, Georgetown University

"The Terrorist's Dilemma adds an important dimension to the study of terrorism. The book is inventive in its use of organizational theory and sources, and its argument is logically impeccable. It is an astute and useful corrective to the misperceptions of terrorism as utterly unreasoning."—Martha Crenshaw, author of Explaining Terrorism

"The overall topic of this book—the internal dynamics and dilemmas that terrorist groups face in controlling their members—has not been seriously examined, and this book makes important contributions to a timely subject. The empirical studies are well-researched and provide compelling evidence."—Michael Freeman, author of Freedom or Security

"This book offers comprehensive evidence about how the structure of terrorist organizations affects patterns of terrorist violence and how changes to the operational environment feed back into the way terrorists organize themselves. The result is a far richer and more nuanced picture of how terrorism works, and what can be done to prevent it, than that offered by the existing literature."—Ethan Bueno de Mesquita, University of Chicago