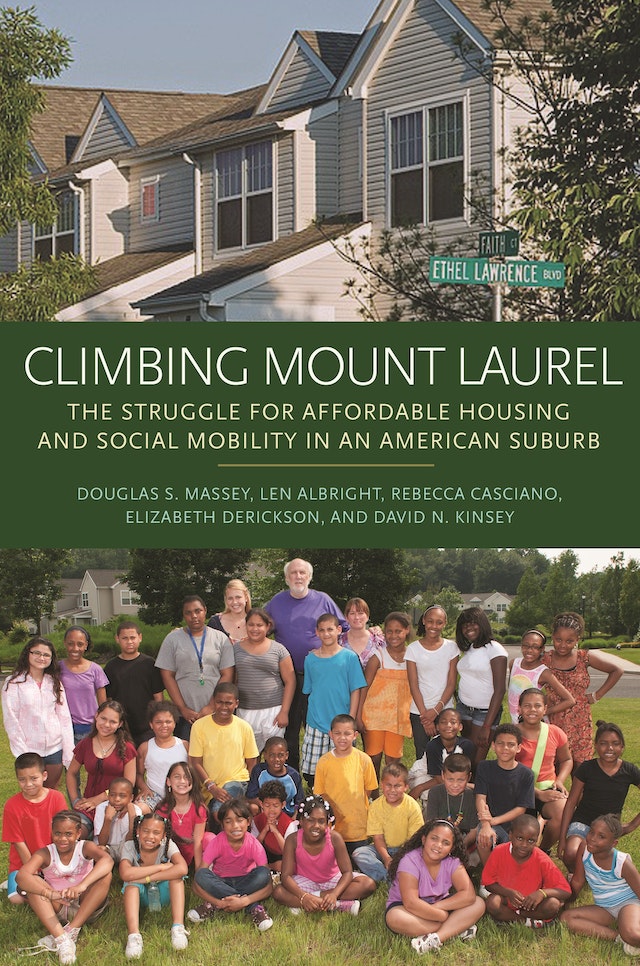 Under the New Jersey State Constitution as interpreted by the State Supreme Court in 1975 and 1983, municipalities are required to use their zoning authority to create realistic opportunities for a fair share of affordable housing for low- and moderate-income households. Mount Laurel was the town at the center of the court decisions. As a result, Mount Laurel has become synonymous with the debate over affordable housing policy designed to create economically integrated communities. What was the impact of the Mount Laurel decision on those most affected by it? What does the case tell us about economic inequality?

Climbing Mount Laurel undertakes a systematic evaluation of the Ethel Lawrence Homes—a housing development produced as a result of the Mount Laurel decision. Douglas Massey and his colleagues assess the consequences for the surrounding neighborhoods and their inhabitants, the township of Mount Laurel, and the residents of the Ethel Lawrence Homes. Their analysis reveals what social scientists call neighborhood effects—the notion that neighborhoods can shape the life trajectories of their inhabitants. Climbing Mount Laurel proves that the building of affordable housing projects is an efficacious, cost-effective approach to integration and improving the lives of the poor, with reasonable cost and no drawbacks for the community at large.

Douglas S. Massey is the Henry G. Bryant Professor of Sociology and Public Affairs at Princeton University and director of its Office of Population Research. Len Albright is assistant professor of sociology at Northeastern University. Rebecca Casciano is the CEO of Rebecca Casciano, LLC. Elizabeth Derickson is a doctoral candidate in sociology at Princeton University. David N. Kinsey is lecturer of public and international affairs at Princeton's Woodrow Wilson School and a partner in the planning consulting firm Kinsey & Hand.

"Upscale Mount Laurel loomed large in the New Jersey State Supreme Court's key fair housing decisions in 1975 and 1983. But the housing itself wasn't built until all of 2001. For years, locals protested hard that home values would fall and crime rates would rise. Douglas S. Massey and four other authors . . . meticulously document how this wasn't the case at all."—Katharine Whittemore, Boston Globe

"Sociologist Massey and his coauthors tell a remarkable story about the Ethel Lawrence Homes (ELH) project, an affordable housing project for low- and moderate-income minority residents in an affluent white suburb in Mount Laurel Township, New Jersey. . . . They argue that the development of affordable housing projects for low-income minorities in affluent suburbs is an effective means to reduce race and class segregation, increase social mobility, reduce dependency, create better human capital, and achieve family well-being. A significant contribution to urban community studies and the literature on social policy related to housing in the metropolitan U.S."—Choice

"Climbing Mount Laurel should be on every planner's bookshelf for two key reasons. First, the book will likely serve as a fine, detailed study of a successful affordable housing project. Second, Climbing Mount Laurel can serve as a source of inspiration that economic and racial integration is possible in suburbia, but only when planners and developers pay attention to the big and little details."—Stuart Meck, Journal of American Planning Association

"Massey and his coauthors provide a concise, effective overview of exclusionary practices and their effects on residential segregation."—John R. Logan, American Journal of Sociology

"Climbing Mount Laurel is a welcome addition to the literature on housing mobility programs and neighborhood effects. Its methodological rigor and ability to avoid the pitfalls of spatial determinism are some of its key strengths, and the book should be of interest to scholars and practitioners of affordable housing, planning law, and program evaluation."—Aretousa Bloom, Journal of Sociology and Social Welfare

"Impeccable. . . . Climbing Mount Laurel exemplifies social science at its finest—conclusively demonstrating through precise, thorough, thoughtful, and thought-provoking analysis how, for tens of millions of Americans, the path to the American Dream begins and ends at home."—Mark Rubinfeld, Journal of American Culture

"Exploring the impact of an affordable housing development in Mount Laurel, New Jersey, this book provides new and innovative methodologies for examining key theoretical and public policy issues that have been the subject of intensive debate. It will be useful to scholars, public officials, and others interested in the way American communities develop in the face of increasing diversity and inequalities."—Gregory Squires, George Washington University