How a famous painting opens a window into the life, times, and philosophy of René Descartes 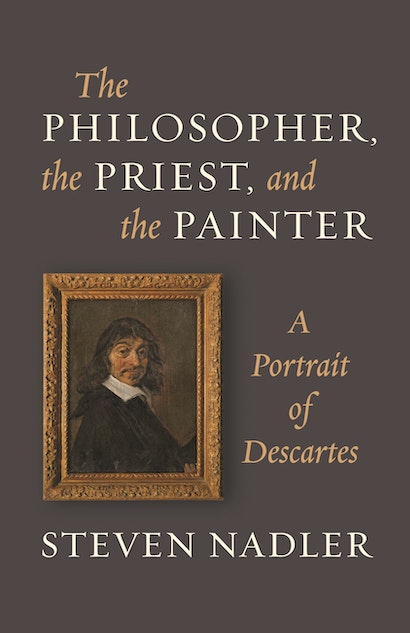 In the Louvre museum hangs a portrait that is considered the iconic image of René Descartes, the great seventeenth-century French philosopher. And the painter of the work? The Dutch master Frans Hals—or so it was long believed, until the work was downgraded to a copy of an original. But where is the authentic version, and who painted it? Is the man in the painting—and in its original—really Descartes?

A unique combination of philosophy, biography, and art history, The Philosopher, the Priest, and the Painter investigates the remarkable individuals and circumstances behind a small portrait. Through this image—and the intersecting lives of a brilliant philosopher, a Catholic priest, and a gifted painter—Steven Nadler opens a fascinating portal into Descartes’s life and times, skillfully presenting an accessible introduction to Descartes’s philosophical and scientific ideas, and an illuminating tour of the volatile political and religious environment of the Dutch Golden Age. As Nadler shows, Descartes’s innovative ideas about the world, about human nature and knowledge, and about philosophy itself, stirred great controversy. Philosophical and theological critics vigorously opposed his views, and civil and ecclesiastic authorities condemned his writings. Nevertheless, Descartes’s thought came to dominate the philosophical world of the period, and can rightly be called the philosophy of the seventeenth century.

Shedding light on a well-known image, The Philosopher, the Priest, and the Painter offers an engaging exploration of a celebrated philosopher’s world and work.

Steven Nadler is the William H. Hay II Professor of Philosophy at the University of Wisconsin—Madison. His books include Rembrandt's Jews, which was a finalist for the Pulitzer Prize; Spinoza: A Life, which won the Koret Jewish Book Award; and A Book Forged in Hell: Spinoza's Scandalous Treatise and the Birth of the Secular Age (Princeton).

"[B]y situating him firmly in his time and place, [Nadler] makes clear what made Descartes the intellectual superstar of his day. . . . [A]n original, intriguing set-up. . . . [A]s an introduction to Descartes' philosophy, it is excellent."—David Wolf, Slate

"As one would expect from a distinguished philosopher such as Nadler, the description of Descartes's philosophy, and in particular his Discourse (1637) and Meditations (1641), is flawless."—Jerry Brotton, Literary Review

"Cartesian iconography centers around a widely known portrait of Descartes attributed to Frans Hals. In this book, Nadler uses the story of that painting's origin to present a study of Descartes and his philosophy that will be accessible to a wide audience. . . . [T]his volume serves as a very good introduction to Descartes's philosophy in historical context."—Choice

"[C]harming. . . . Nadler, an American philosopher and author, has written an immensely readable introduction to Descartes."—Australian

"[A] landscape (or at least a well-turned charcoal sketch) of religious, artistic, and economic life in the Netherlands during the first half of the 17th century. . . . Nadler's book . . . takes us back upstream a ways—beginning, rather than exempting us from, a dialog with the dead."—Scott McLemee, Inside Higher Ed

"Nadler is appealing to a wider audience that is looking less for hard-nosed scholarship and more for a story to follow, some intrigue to pique the mind while telling the reader something interesting and informative about the life and work of Descartes. Insofar as the work is meant for a general audience, it accomplishes its aims well enough and should be well-received and enjoyed by those readers."—Aaron Massecar, European Legacy

"Nadler gives us a remarkably accessible and historically rich picture of Descartes's life and thought. The book provides a reliable and lively introduction to Descartes for the general reader and for scholars a pleasant portrait of Descartes."—Peter M. Distelzweig, Journal of the History of Philosophy

"The famous painting of Descartes by Frans Hals that hangs in the Louvre is, in fact, not by Frans Hals. And a similar things-are-not-what-they-seem quality applies to this clever little book. For behind the telling of the story of a clutch of paintings and a group of friends in the seventeenth century, Nadler gives us a brisk and lively account of Descartes' philosophy, which, more than any other, would become the foundation of modernity."—Russell Shorto, author of Descartes' Bones

"This lucid and readable book serves as a biography, an exposition of philosophy, and a rich tapestry of Dutch history and culture."—Larry Silver, University of Pennsylvania

"The Philosopher, the Priest, and the Painter is an excellent introduction for general readers to Descartes and his thought. Nadler brings the story and ideas to life."—Daniel Garber, Princeton University