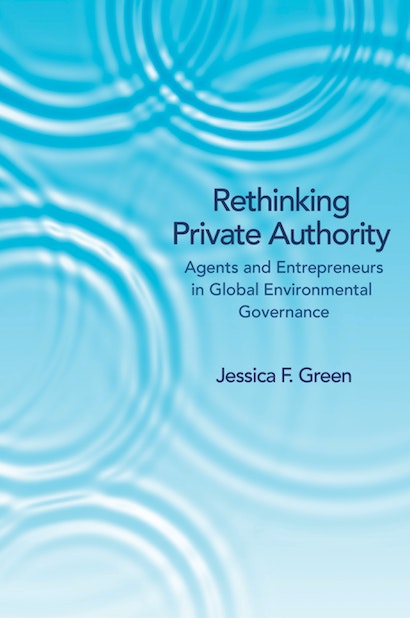 Rethinking Private Authority examines the role of non-state actors in global environmental politics, arguing that a fuller understanding of their role requires a new way of conceptualizing private authority. Jessica Green identifies two distinct forms of private authority — one in which states delegate authority to private actors, and another in which entrepreneurial actors generate their own rules, persuading others to adopt them.


Drawing on a wealth of empirical evidence spanning a century of environmental rule making, Green shows how the delegation of authority to private actors has played a small but consistent role in multilateral environmental agreements over the past fifty years, largely in the area of treaty implementation. This contrasts with entrepreneurial authority, where most private environmental rules have been created in the past two decades. Green traces how this dynamic and fast-growing form of private authority is becoming increasingly common in areas ranging from organic food to green building practices to sustainable tourism. She persuasively argues that the configuration of state preferences and the existing institutional landscape are paramount to explaining why private authority emerges and assumes the form that it does. In-depth cases on climate change provide evidence for her arguments.


Groundbreaking in scope, Rethinking Private Authority demonstrates that authority in world politics is diffused across multiple levels and diverse actors, and it offers a more complete picture of how private actors are helping to shape our response to today’s most pressing environmental problems.

Jessica F. Green is assistant professor of political science at Case Western Reserve University. She is the coeditor of The Politics of Participation in Sustainable Development Governance and Reforming International Environmental Governance.

"In this pioneering work, Green explores how governmental and private actors can work together to institute regulations to address global environmental problems. . . . [I]ts conclusions have implications for the entire field of international relations. The work is carefully argued, clearly written, and supported by an extensive bibliography."—Choice

"The author has to be acclaimed for her ability to wade through hundreds if not thousands of documents, verify their authenticity and reach conclusions on the variety of measures taken by the private sector in cooperation with governments, international organisations or independently, to discharge their responsibility toward containing emissions."—Madras Sivaraman, International Journal of Environmental Studies

"Offer[s] a persuasive framework for identifying and analyzing private authority at the international level. The usefulness of the framework is illustrated here by extended empirical studies."—Kathryn Hochstetler, Perspectives on Politics

"The most important book yet written on private authority in world politics. Conceptually rich, carefully argued, and provocative, Rethinking Private Authority goes far beyond its title to provide a significant new foundation for the study of global governance."—David A. Lake, University of California, San Diego

"Jessica Green's ambitious and thoughtful new book shows that private actors—NGOs and firms—often hold the keys to successful governance. In some settings, governments delegate important functions to these actors, but even more interesting is when private actors innovate new forms of governance on their own. Her study, which develops these ideas by focusing on environmental cooperation, is a big step forward in explaining how governance really works."—David G. Victor, University of California, San Diego

"Rethinking Private Authority makes a significant contribution to the growing literature on private governance. Green develops a novel theoretical account of private authority, specifically through the distinction between delegated and entrepreneurial authority, and elaborates for the first time the quantitative extent of private authority in global environmental politics."—Matthew Paterson, coauthor of Climate Capitalism: Global Warming and the Transformation of the Global Economy

"Green provides persuasive empirical evidence that private authority is not displacing public authority—instead, governance in general has been increasing, and private and public authority have expanded together, and not in competition with each other. She also contributes an important distinction between types of private authority—delegated or entrepreneurial—and their relationship to public authority."—Virginia Haufler, author of A Public Role for the Private Sector: Industry Self-Regulation in a Global Economy