A unique, stunningly illustrated look at the origins, development, and future prospects of cities 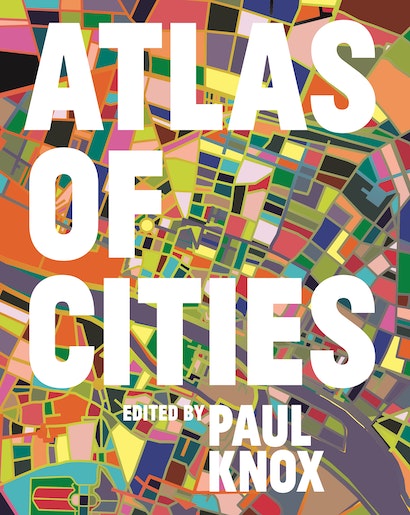 More than half the world’s population lives in cities, and that proportion is expected to rise to three-quarters by 2050. Urbanization is a global phenomenon, but the way cities are developing, the experience of city life, and the prospects for the future of cities vary widely from region to region. The Atlas of Cities presents a unique taxonomy of cities that looks at different aspects of their physical, economic, social, and political structures; their interactions with each other and with their hinterlands; the challenges and opportunities they present; and where cities might be going in the future.

Each chapter explores a particular type of city—from the foundational cities of Greece and Rome and the networked cities of the Hanseatic League, through the nineteenth-century modernization of Paris and the industrialization of Manchester, to the green and “smart” cities of today. Expert contributors explore how the development of these cities reflects one or more of the common themes of urban development: the mobilizing function (transport, communication, and infrastructure); the generative function (innovation and technology); the decision-making capacity (governance, economics, and institutions); and the transformative capacity (society, lifestyle, and culture).

Using stunning info-graphics, maps, charts, tables, and photographs, the Atlas of Cities is a comprehensive overview of the patterns of production, consumption, generation, and decay of the twenty-first century’s defining form.

Paul Knox is University Distinguished Professor of Urban Affairs and Planning and codirector of the Global Forum on Urban and Regional Resilience at Virginia Polytechnic Institute and State University. His many books include Palimpsests: Biographies of 50 City Districts, Cities and Design, and Urban Social Geography.

"This fascinating survey effectively complemented and enriched by color maps, charts, and illustrations, celebrates the urban landscape's past, present, and potential for the future. Intended for the general reader, Knox's reference is recommended to anyone interested in urban studies and geography."—Library Journal

"[T]he large format of this coffee-table book provides room for a stunning abundance of photographs, charts, graphs, maps, and other enhancements that make Atlas of Cities as much a visual experience as a narrative one."—Ray Bert, Civil Engineering

"This elegantly illustrated volume is a feast of maps and graphics. . . . Geographers, sociologists, architects, and urban planners have contributed clear thematic chapters, and the result is a book that will encourage readers to think differently about many cities, including their own."—Graeme Wood, Pacific Standard

"A cartographic buffet that lays out how our metropolises came to be and what makes them tick."—John King, San Francisco Chronicle

"[T]his is a volume that could excite exploration of those more flexible sources, and its prose, design and illustration will surely achieve that for some who come across it—perhaps in libraries or classrooms."—Alan Mabin, Urban Africa

"A lavish, exhaustive look at the history, transformation, and future of urban centres around the globe. The perfect book for the Richard Florida—who, coincidentally, wrote the foreword—in your life."—Globe and Mail

"Much more than a book. Through innovative maps, charts, info-graphics and tables, Atlas lays out the cycles of consumption, creation, and decay that drive the living spaces that will soon house three-fourths of the human race, up from today's half. This book doesn't tell you about cities, it lets you understand them."—Dan Bischoff, Newark Star-Ledger

"This atlas does not graph the usual geographic shapes of cities, but tries to diagram the many other dimensions within cities around the world. Taking example from many specific cities (such as Istanbul, or Cairo) it tries to dissect, almost like an x-ray, the many organs, tissues, cells, and anatomy of a typical city. . . . This book will likely illuminate your world."—Kevin Kelly, Wink

"The kind of book I imagine anyone in the field of Urban Studies would like to own. . . . Atlas of Cities is not just a well-edited book full of useful didactical maps but also the kind of book that the members of our map-loving species want to have."—Manuel B, Aalbers, Urban Studies

"Atlas of Cities serves its purpose as an easy-to-read, graphically-compelling entry point to understanding some of the complexity of cities exceedingly well—ideal for planning and design students, as well as budding urbanists of all ages. The high-quality of information design and printing will also appeal to those interested in city visualizations. For well-seasoned urban professionals and academics, the wide cross-section of cities covered in the book offers an easy and quick reference for information on some of the dominant cities in the contemporary world. Overall, Atlas of Cities follows in the footsteps of the most engaging atlases of recent decades, offering a little something special for everyone….in a beautifully designed package."—Erick Villagomez, Spacing

"Compelling and unique. . . . This is one of the most thought-provoking and accessible books available on contemporary urbanism."—Israel Book Reviews

"This is an atlas with a difference. It broaches the complexity of the urban experience directly and in a beautifully persuasive graphical way, showing how this great variety of city types and features can be explained both chronologically and geographically. A wonderful book of new insights about how our contemporary cities have evolved."—Michael Batty, author of The New Science of Cities

"The Atlas of Cities is a major contribution to our understanding of the place of cities in today's world. This is a new type of map. It does what words alone cannot do; it makes visible the thick patterns that are cutting across old divides."—Saskia Sassen, Columbia University and author of Expulsions: Brutality and Complexity in the Global Economy

"This vibrant book provides an exciting and insightful tour of the cities that are shaping humanity's future; every would-be urbanist can learn something from this volume."—Edward Glaeser, author of Triumph of the City: How Our Greatest Invention Makes Us Richer, Smarter, Greener, Healthier, and Happier

"‘Form follows function' was the watchword of twentieth-century modernists but, as the Atlas of Cities deftly shows, the concept has undergirded city building from the start. From imperial Rome and industrial Manchester to today's Asian megacities and border-transcending anomalies like Miami and Dubai, Paul Knox and his talented team of scholars read each city's meaning through its built environment. Packed with info-graphics that are often quirky but always relevant, reading the Atlas of Cities is like walking through the world's great metropolises—something new to ponder around every corner."—Daniel Brook, author of A History of Future Cities

"The Atlas of Cities is an exhaustive and visually captivating field guide to the past history, present tensions, and future transformation of our planet by humanity's city builders."—Anthony M. Townsend, author of Smart Cities: Big Data, Civic Hackers, and the Quest for a New Utopia