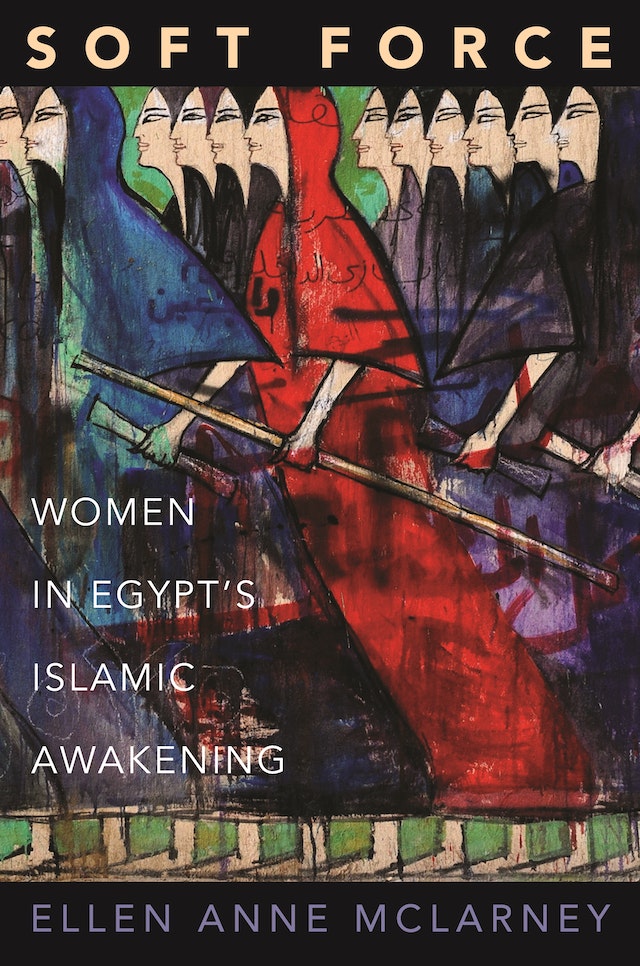 In the decades leading up to the Arab Spring in 2011, when Hosni Mubarak’s authoritarian regime was swept from power in Egypt, Muslim women took a leading role in developing a robust Islamist presence in the country’s public sphere. Soft Force examines the writings and activism of these women—including scholars, preachers, journalists, critics, actors, and public intellectuals—who envisioned an Islamic awakening in which women’s rights and the family, equality, and emancipation were at the center.

Challenging Western conceptions of Muslim women as being oppressed by Islam, Ellen McLarney shows how women used “soft force”—a women’s jihad characterized by nonviolent protest—to oppose secular dictatorship and articulate a public sphere that was both Islamic and democratic. McLarney draws on memoirs, political essays, sermons, newspaper articles, and other writings to explore how these women imagined the home and the family as sites of the free practice of religion in a climate where Islamists were under siege by the secular state. While they seem to reinforce women’s traditional roles in a male-dominated society, these Islamist writers also reoriented Islamist politics in domains coded as feminine, putting women at the very forefront in imagining an Islamic polity.

Ellen McLarney is assistant professor of Arabic literature and culture at Duke University.

"Women's roles in the intellectual, organizational and political development of Islamist movements have rarely received the attention they deserve. McLarney focuses in depth on the writings of a wide array of Egyptian women involved with Islamist movements, presenting a nuanced and careful reading of their religious and political thought."—Marc Lynch, WashingtonPost.com's Monkey Cage blog

"McLarney (Arabic literature and culture, Duke Univ.) provides an intellectual history of women's ideas within the Islamist movement in Egypt over the past century. . . . This work will be of interest to a wide variety of scholars in Islamic studies, women's studies, political science, and literary theory. It illuminates the essential role of women in the modern Islamist movement in a unique way."—Choice

"Through her eloquent, sophisticated and careful analysis, McLarney offers a very important but somewhat overlooked contribution to the in depth understanding of the various roles of women in the historical and current developments within the Muslim world. . . . The wealth of information in this volume makes it an important contribution to the study of Islamic revivalism, women and Islam within the context of 20th and 21st century developments in Egypt and the wider Middle East."—Katherine Ranharter, Ph.D., Journal of Global Analysis

"Ellen Anne McLarney’s Soft Force: Women in Egypt’s Islamic Awakening is an ambitious study that seeks to incorporate women as key contributors to the story of religious change in Egypt. McLarney’s approach is both unconventional and necessary. . . . By bringing Muslim women across the ideological spectrum together as part of an extended conversation of gender, ethics, and politics, [Soft Force] challenges historians and anthropologists to appreciate the ways in which women continue to shape the relationship between religion, politics, and society in Egypt."—Aaron Rock-Singer, Bustan

"McLarney brings to our attention the thinking and life practices of women across the decades in Egypt who have used an Islamic discourse of their own making to strive for personal perfection and for a better social order. Appearing after the Egyptian uprisings and during a time when for many 'the revolution' continues, this book stands to provoke multiple readings and lively debate."—Margot Badran, author of Feminism in Islam: Secular and Religious Convergences

"This is an eloquent and carefully argued book. Clear, engaging, and sophisticated, Soft Force is crucial for a more complete understanding of the origins of contemporary and ongoing debates about women, Islam, and public life in Egypt."—Lara Deeb, coauthor of Leisurely Islam: Negotiating Geography and Morality in Shi‘ite South Beirut

"McLarney challenges the conventional wisdom that assumes the docility and oppression of Muslim women in the processes of Islamic revival, demonstrating instead their roles as active shapers of public discourse. Soft Force is a brilliant and highly engaging book."—Omnia El Shakry, author of The Great Social Laboratory: Subjects of Knowledge in Colonial and Postcolonial Egypt