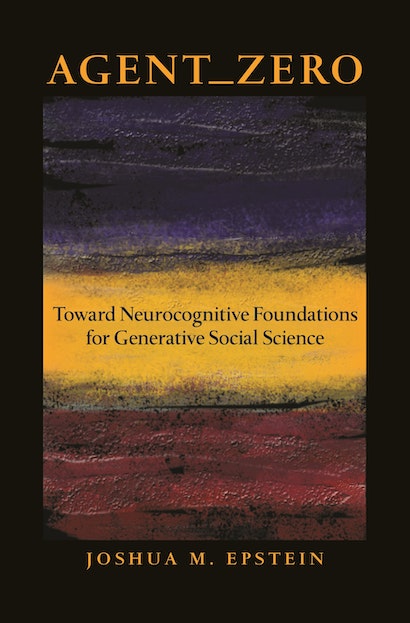 The Final Volume of the Groundbreaking Trilogy on Agent-Based Modeling

Epstein weaves a computational tapestry with threads from Plato, Hume, Darwin, Pavlov, Smith, Tolstoy, Marx, James, and Dostoevsky, among others. This transformative synthesis of social philosophy, cognitive neuroscience, and agent-based modeling will fascinate scholars and students of every stripe. Epstein’s computer programs are provided in the book or on its Princeton University Press website, along with movies of his “computational parables.?

Agent_Zero is a signal departure in what it includes (e.g., a new synthesis of neurally grounded internal modules), what it eschews (e.g., standard behavioral imitation), the phenomena it generates (from genocide to financial panic), and the modeling arsenal it offers the scientific community.

For generative social science, Agent_Zero presents a groundbreaking vision and the tools to realize it.

Joshua M. Epstein directs the Center for Advanced Modeling at The Johns Hopkins University, where he is a professor in the Department of Emergency Medicine with joint appointments in the Departments of Applied Mathematics, Economics, International Health, Environmental Health Sciences, Biostatistics, Civil Engineering, and the Institute for Computational Medicine. He is also an external professor at the Santa Fe Institute. This volume forms a trilogy on agent-based modeling, with Growing Artificial Societies: Social Science from the Bottom Up (MIT), with coauthor Robert Axtell, and Generative Social Science: Studies in Agent-Based Computational Modeling (Princeton).

"Agent Zero offers a solution to some of social science's great puzzles. Its behavioral basis is the interplay of emotion, cognition, and network contagion effects. It elegantly explains why so many human actions are so manifestly dysfunctional, and why some are downright evil."—George Akerlof, Nobel Laureate in Economics

"Rarely has a book stimulated me intellectually as much as this one. Particularly exciting is the incorporation of agents who feel (affect) and deliberate, as well as influence one another through social interaction. Epstein is a brilliantly creative scholar and the range of applications showcased here is stunning. In sum, this is a pathbreaking book."—Paul Slovic, University of Oregon

"Joshua Epstein proposes a parsimonious but powerful model of individual behavior that can generate an extraordinary range of group behaviors, including mob violence, manias and financial panics, rebellions, network dynamics, and a host of other complex social phenomena. This is a highly original, beautifully conceived, and important book."—Peyton Young, University of Oxford

"In social science generally and most notably in economics, the rational actor model has long been the benchmark for policy analysis and institutional design. Epstein now offers a worthy alternative: Agent_Zero, a mathematically and computationally tractable agent whose inner workings are grounded in neuroscience. Much like you and me, Agent_Zero is influenced by emotion, reason, and social pressures. Epstein demonstrates that collections of Agent Zeros perform amazingly like real groups, teams, and societies and can therefore serve as the fundamental building blocks for what he calls Generative Social Science. The rational actor now has a true competitor. Agent_Zero is a major advance."—Scott Page, University of Michigan

"This is social science based on how our brains actually work. Epstein's computerized 'agents' can feel passion and fear, and can influence each other emotionally. And when they interact, we see many of the realities of social life, from the dynamics of juries to racist violence to Arab springs. A remarkable and original piece of work."—W. Brian Arthur, Santa Fe Institute