A provocative new approach to race in the workplace 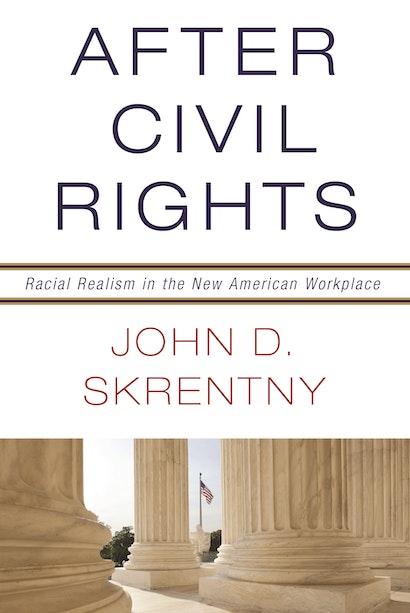 What role should racial difference play in the American workplace? As a nation, we rely on civil rights law to address this question, and the monumental Civil Rights Act of 1964 seemingly answered it: race must not be a factor in workplace decisions. In After Civil Rights, John Skrentny contends that after decades of mass immigration, many employers, Democratic and Republican political leaders, and advocates have adopted a new strategy to manage race and work. Race is now relevant not only in negative cases of discrimination, but in more positive ways as well. In today’s workplace, employers routinely practice “racial realism,” where they view race as real—as a job qualification. Many believe employee racial differences, and sometimes immigrant status, correspond to unique abilities or evoke desirable reactions from clients or citizens. They also see racial diversity as a way to increase workplace dynamism. The problem is that when employers see race as useful for organizational effectiveness, they are often in violation of civil rights law.

After Civil Rights examines this emerging strategy in a wide range of employment situations, including the low-skilled sector, professional and white-collar jobs, and entertainment and media. In this important book, Skrentny urges us to acknowledge the racial realism already occurring, and lays out a series of reforms that, if enacted, would bring the law and lived experience more in line, yet still remain respectful of the need to protect the civil rights of all workers.

John D. Skrentny is professor of sociology and director of the Center for Comparative Immigration Studies at the University of California, San Diego. His books include The Minority Rights Revolution and The Ironies of Affirmative Action: Politics, Culture, and Justice in America.

"John Skrentny, Professor of Sociology and Co-Director of the Center for Comparative Immigration Studies at UC-San Diego, gives readers a well-researched, thoroughly documented and provocative work, presenting his theory for how employers view race in the workplace in the USA. . . . Skrentny's chapter on racial realism, and its corollary, immigrant realism, in the low-wage workplace, is one I wish I had written. . . . His account of how the law works in practice and on the ground is a great read for those interested in legal studies, history, political science, sociology or civil rights."—Leticia Saucedo, LSE Review of Books

"If you want to explore deeper social policy, it is worth a read."—Barry H. Dyller, Trial

"With the book's over 1,300 notes, scores of case law findings, and dozens of studies on race and labor market outcomes, it is impossible not to be impressed by Skrentny's erudition, research prowess, and deft ability to link multiple academic disciplines under one driving question. . . . If you are a race, labor, immigration, or legal scholar you should absolutely read this book. You will never think about Title VII or the intersection of race and employment decisions in the same way again."—Charles A. Gallagher, American Journal of Sociology

"Skrentny shows that in many sectors of the labor market, race is used in ways that were unanticipated when the 1964 Civil Rights Act was enacted. . . . [His] account of racial realism in the low-skilled sector is chilling."—Kevin Lang, Journal of Economic Literature

"This book skillfully presents comprehensive empirical research and is written in a conversational style accessible to a wide audience."—Nigel Carter, Transfer

"Skrentny has authored a fascinating book that is filled with law, information about how employers operate notwithstanding the law, and empirical evidence that supports and, at times, contradicts some employers' beliefs about the usefulness of employing race as a qualifier for jobs. This empirical research should be useful to lawyers who litigate these cases using Title VII. And Skrentny comes up with a cross-disciplinary approach to solving problems. Not all of his solutions are politically or constitutionally possible, but the legislative solutions he suggests are interesting and innovative, and, perhaps in the future, may be effective."—Ann C. McGinley, Tulsa Law Review

"After Civil Rights not only contributes valuably to our understanding of how race figures into employment practices at the contemporary American workplace, it also succeeds in making the case for renewing the debate about where law and public policy should go from here."—Anthony S. Chen, Social Service Review

"Sociologist John D. Skrentny has written an important and original book examining the fundamental role played by race in hiring and other personnel decisions in the modern American workplace. The originality of his premise calls attention to a phenomenon that everyone knows about but rarely discusses as he investigates the ways in which racial considerations are taken into account by employers for a wide range of reasons, even though in principle this practice was prohibited by the Civil Rights Act of 1964, and justly celebrated as a landmark statute of historic importance. Skrentny obtains remarkable mileage by exploring this simple yet apparently paradoxical state of affairs in depth and by avoiding judgmental impulses that frequently arise."—Gavin Wright, Journal of American Studies

"John Skrentny's After Civil Rights will change the way we think and talk about the racial dynamics of the American workplace. It is a singular achievement, revealing in insightful ways the main strategies for managing race in employment over the past several decades. Skrentny maintains that these strategies, what he calls 'racial realism,' make American civil rights laws seem disturbingly outdated. Racial differences can be constructively managed with a focus that goes beyond the protection of rights. He addresses this disconnect head-on with compelling arguments on how the practices of racial realism can be harmonized with the American goals of justice and equal opportunity. This well-written and thoroughly researched book is a must-read."—William Julius Wilson, Harvard University

"John Skrentny's new realism about job discrimination makes a fundamental contribution to conventional understandings of the problem. The book will be a key resource for a new generation as it engages in an ongoing reassessment of the living legacy of the Civil Rights Act of 1964."—Bruce Ackerman, Yale University

"This profoundly important book, from one of our most sophisticated and influential scholars of race, paints a rich and variegated picture of contemporary American racial and ethnic relations at work. Skrentny shows that bias remains pervasive at the bottom of the occupational pyramid, even as it has moderated at the top. He makes innovative and provocative suggestions for reform that offer a ray of hope."—Frank Dobbin, author of Inventing Equal Opportunity

"After Civil Rights is a terrific book. Employers are increasingly using race-consciousness to improve their own bottom line, and they are doing so in ways that neither Congress nor the Supreme Court has expressly condoned. There is no one better suited to tell this story than Skrentny."—Deborah Malamud, New York University School of Law