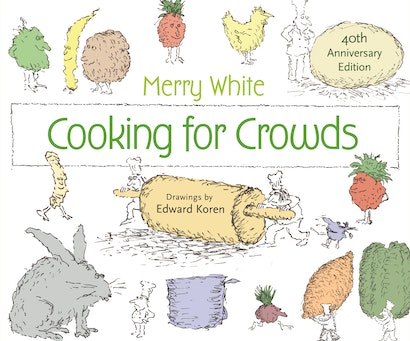 When Cooking for Crowds was first published in 1974, home cooks in America were just waking up to the great foods the rest of the world was eating, from pesto and curries to Ukrainian pork and baklava. Now Merry White’s indispensable classic is back in print for a new generation of readers to savor, and her international recipes are as crowd-pleasing as ever—whether you are hosting a large party numbering in the dozens, or a more intimate gathering of family and friends.

In this delightful cookbook, White shares all the ingenious tricks she learned as a young Harvard graduate student earning her way through school as a caterer to European scholars, heads of state, and cosmopolitans like Jacqueline Kennedy Onassis. With the help of her friend Julia Child, the cook just down the block in Cambridge, White surmounted unforeseen obstacles and epic-sized crises in the kitchen, along the way developing the surefire strategies described here. All of these recipes can be prepared in your kitchen using ordinary pots, pans, and utensils. For each tantalizing recipe, White gives portions for serving groups of six, twelve, twenty, and fifty.

Merry White is professor of anthropology at Boston University. Her books include Coffee Life in Japan and Noodles Galore. She teaches anthropology courses on food and social change, and has been a caterer, cookbook writer, and food journalist. She received Japan's prestigious Order of the Rising Sun, Gold Rays with Neck Ribbon, for her distinguished achievements in promoting Japanese culture. Edward Koren's acclaimed drawings have appeared in the New Yorker, the New York Times, Vanity Fair, and many other publications. He has illustrated many books, including Poems I Wrote When No One Was Looking.

"[Merry White's] book, made up of recipes she collected as the caterer for the Harvard Center for European Studies, suggested a new way of entertaining, with self-serve spanakopita, petite shrimp quiche and that savior of the anxious cook, the casserole that can be made a day ahead. Edward Koren's woolly illustrations set the tone: vegetables are our friends, and food tastes best in groups. Even though pesto and vindaloo are no longer exotic, during the holidays her attitude (and her meatballs) may be what every stressed-out host needs."—Alexandra Lange, New York Times

"Not just enormously charming but useful, full of sturdy recipes that can still seem mildly exotic no matter how much we flatter ourselves at the sophistication of our palates. . . . This is more, that is, than an artifact of Brooklyn avant la lettre. It's full of practical dishes and tricks you'll call your own, like tossing fresh-roasted almonds in maple syrup to serve on ice cream."—Corby Kummer, The Atlantic

"Recipes ahead of the curve 40 years ago—dirty rice, pork vindaloo—remain au courant; others—Swedish meatballs, Charlotte Malakoff au chocolat—exude a retro '70s vibe that's also au courant. Prep details for six, 12, 20 and 50 servings of each recipe are provided. Practical advice abounds, including not to multiply powerful spices like other ingredients. . . . [Cooking for Crowds] remains a boffo resource for those hankering to make chicken Bengal for 12 or baklava for 50."—Anne Kingston, Maclean's

"If you're looking for a cookbook that will help you serve a crowd this holiday season, this is a great book for you with plenty of variety. If you're wanting an interesting read about food culture changes, this is also interesting, seeing how commonplace some 'exotic' ingredients from the 70s are now."—Amy Phelps, News and Sentinel

"Cooking for Crowds by Merry White . . . brings friendly exuberance to the subject of cooking for large numbers that has made me think that, actually, it might be kind of cool to feed a crowd-pleasing lasagne to 50."—Bee Wilson, Telegraph

"The reasons to re-issue the book are tied not only to burgeoning popularity of thematic cook books and culinary memoirs, but also the current healthy eating and nutritional guidelines, which favor hearty vegetables and whole grains (although not butterfat), included in these soups, stews, and salads. Each recipe is a satisfying construction on its own, with suggestions for variations or substitutions in ingredients; with a brief account of its role(s) in a fully satisfying meal."—Ellen Messer, FoodAnthropology

"[T]his is a thoroughly delightful and accessible source of food inspiration for catering creatively for large groups. Cookery clubs and caterers, no matter the size, should definitely bear this one in mind."—Lois Henderson, Bookpleasures.com

"Simply stated, no community library cookbook collection can be considered complete without the inclusion of a copy of Merry White's Cooking For Crowds."—James A. Cox, Midwest Book Review

"[I]t ticks all the boxes. The recipes look great, but mostly the author sounds like somebody I'd love to have dinner with. There are no photos, which is more than fine, as it has lots of sweet black and white drawings by Edward Koren."—Lobster Squad

"Cooking for Crowds represents a coming-of-age moment in the cultural history of food, cooking, and taste in America. It has been one of my favorite cookbooks for more than thirty years."—Peter Gourevitch, founding dean, School of International Relations and Pacific Studies, University of California, San Diego

"Corky White has been persuaded to reissue the cookbook that was so much a part of our youthful gatherings. These diverse (and feasible) recipes for large tables are ideal for any occasion, whatever your group passions. Edward Koren's illustrations capture the unbuttoned hirsute fellowship of ingredients and diners."—Charles Maier, Harvard University

"[T]his is a beautifully presented book with an oversized format and fab illustrations by Edward Koren."—Esther N McCarthy