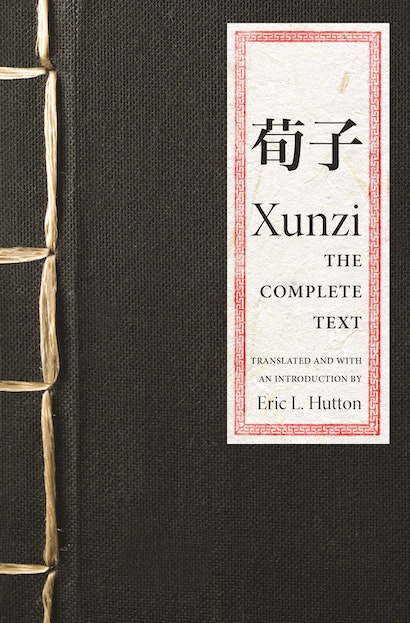 This is the first complete, one-volume English translation of the ancient Chinese text Xunzi, one of the most extensive, sophisticated, and elegant works in the tradition of Confucian thought. Through essays, poetry, dialogues, and anecdotes, the Xunzi articulates a Confucian perspective on ethics, politics, warfare, language, psychology, human nature, ritual, and music, among other topics. Aimed at general readers and students of Chinese thought, Eric Hutton’s translation makes the full text of this important work more accessible in English than ever before.

Named for its purported author, the Xunzi (literally, “Master Xun”) has long been neglected compared to works such as the Analects of Confucius and the Mencius. Yet interest in the Xunzi has grown in recent decades, and the text presents a much more systematic vision of the Confucian ideal than the fragmented sayings of Confucius and Mencius. In one famous, explicit contrast to them, the Xunzi argues that human nature is bad. However, it also allows that people can become good through rituals and institutions established by earlier sages. Indeed, the main purpose of the Xunzi is to urge people to become as good as possible, both for their own sakes and for the sake of peace and order in the world.

In this edition, key terms are consistently translated to aid understanding and line numbers are provided for easy reference. Other features include a concise introduction, a timeline of early Chinese history, a list of important names and terms, cross-references, brief explanatory notes, a bibliography, and an index.

Eric L. Hutton is associate professor of philosophy at the University of Utah.

"This is a long-awaited translation, and I envisage that it will become a standard of scholarship and an invaluable source to which both specialists and non-specialists will be indebted."—Winnie Sung, Notre Dame Philosophical Reviews

"Eric Hutton's new translation of this rich and multifaceted text is . . . a truly valuable gateway for introducing newcomers in the field of Chinese and comparative philosophy, as well as more advanced students and scholars, to the philosophy of Xunzi."—Ori Tavor, Dao: A Journal of Comparative Philosophy

"The decision by Eric Hutton to translate the verse sections as poetry means that this book can be appreciated not only as an important work of early Confucian thought, but also as a literary text."—Olivia Milburn, Journal of the Royal Asiatic Society

"Hutton's work is an improvement over that of Knoblock, as well as that of Dubs and Watson. It is an enormous task to translate from beginning to end a text as difficult as the Xunzi. We should be grateful to Hutton for undertaking it and for devoting so much hard work to completing it."—Jeffrey Riegel, Journal of Chinese Studies

"The Xunzi is a masterwork of Confucian philosophy, and there is no one in the Anglophone world with Eric Hutton's combination of insight into its ideas and scrupulous attention to its text. He has produced an accessible and authoritative translation that will be our standard for years to come."—Stephen C. Angle, Wesleyan University

"An outstanding translation of the complete text of the Xunzi. Eric Hutton has succeeded in providing a translation that is both philosophically precise and highly readable. This will help introduce one of the most important philosophical texts from early China to a larger audience."—Michael Puett, Harvard University

"The time has come for a new, full translation of the Xunzi, and Eric Hutton's fine work is a dramatic improvement from previous versions—in terms of accuracy, philosophical precision, economy, and readability. Hutton's translation will become the new standard."—Aaron Stalnaker, Indiana University

"Eric Hutton has produced an elegant, accessible, and accurate translation of this important Confucian work. Hutton's translation is more precise philosophically and more readable than previous versions. In addition to being an important work of scholarship, this edition will be invaluable for nonspecialists with an interest in Chinese thought."—Bryan W. Van Norden, Vassar College

"Hutton's is the rare translation that balances technical accuracy with ordinary English, and readers from both philosophy and Chinese studies will appreciate it."—Mark Csikszentmihalyi, University of California, Berkeley