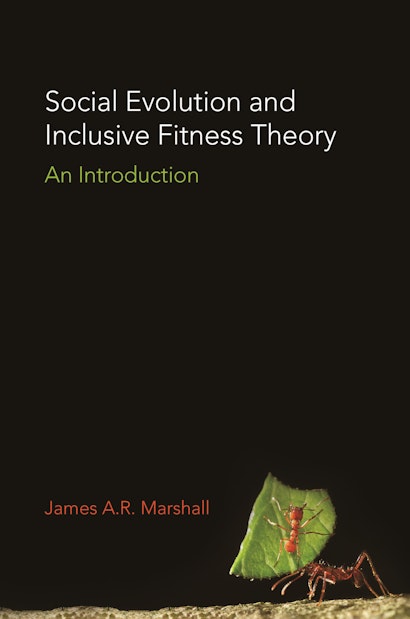 Social behavior has long puzzled evolutionary biologists, since the classical theory of natural selection maintains that individuals should not sacrifice their own fitness to affect that of others. Social Evolution and Inclusive Fitness Theory argues that a theory first presented in 1963 by William D. Hamilton—inclusive fitness theory—provides the most fundamental and general explanation for the evolution and maintenance of social behavior in the natural world.

James Marshall guides readers through the vast and confusing literature on the evolution of social behavior, introducing and explaining the competing theories that claim to provide answers to questions such as why animals evolve to behave altruistically. Using simple statistical language and techniques that practicing biologists will be familiar with, he provides a comprehensive yet easily understandable treatment of key concepts and their repeated misinterpretations. Particular attention is paid to how more realistic features of behavior, such as nonadditivity and conditionality, can complicate analysis. Marshall highlights the general problem of identifying the underlying causes of evolutionary change, and proposes fruitful approaches to doing so in the study of social evolution.

Social Evolution and Inclusive Fitness Theory describes how inclusive fitness theory addresses both simple and complex social scenarios, the controversies surrounding the theory, and how experimental work supports the theory as the most powerful explanation for social behavior and its evolution.

James A. R. Marshall is professor of theoretical and computational biology at the University of Sheffield.

"Overall, this useful little book provides a superlative introduction to the core mathematics one needs to understand the quantitative basis of sociobiology."—Choice

"Inclusive fitness theory has proved a powerful framework for understanding the evolution of biological systems. Marshall's book provides a comprehensive introduction to a frequently misunderstood and maligned method. This is an important book for anyone that wants to understand evolutionary biology, both theorists and empiricists alike."—Kevin Foster, University of Oxford

"Students of social evolution have lacked a book on inclusive fitness theory accessible enough to enlighten the biologists and rigorous enough to satisfy the mathematicians. James Marshall's book succeeds brilliantly at meeting this need. With a firm hand and cool head, Marshall leads the reader expertly through the theory's foundations, complexities, and controversies. Concise yet comprehensive, scholarly yet up to date, his book is an outstanding contribution that will greatly aid the next fifty years of progress in the field."—Andrew Bourke, School of Biological Sciences, University of East Anglia

"James Marshall's lucid account of inclusive fitness provides a comprehensive review of the important role it has played in the development of evolutionary explanations of social behavior. It successfully integrates the results of theoretical and empirical research and deserves to be carefully read by anyone seriously interested in the evolution of social relationships and the structure of animal societies."—Tim Clutton-Brock, University of Cambridge

"Inclusive fitness is one of the biggest ideas in evolution since Darwin, but it is surprisingly confusing for many. In this exceptionally clearly written book, James Marshall explains the theory, its power, how it can be applied, and how it relates to other approaches like multilevel selection. The book is a must-read for graduate students or anyone curious about altruism or cooperation."—Joan Strassmann, Washington University in St. Louis

"The strength of this book lies in its exposition of the central logic of social evolution theory and how it deals with conceptual misunderstandings that have driven recent controversies in this area. All graduate and postgraduate researchers who consider themselves social evolution theorists will want a copy of this book on their shelf."—Andy Gardner, University of St. Andrews

"This well-written introduction to inclusive fitness theory will be of interest to a wide range of theoreticians. Marshall provides comprehensive coverage of how to derive Hamilton's rule, what the terms mean, the different variants and complications, and the existing controversies. The applicability of the rule is nicely illustrated with examples taken from studies of taxa ranging from microbes to mammals."—Stuart West, author of Sex Allocation