The life and times of an enduring work of Jewish spirituality 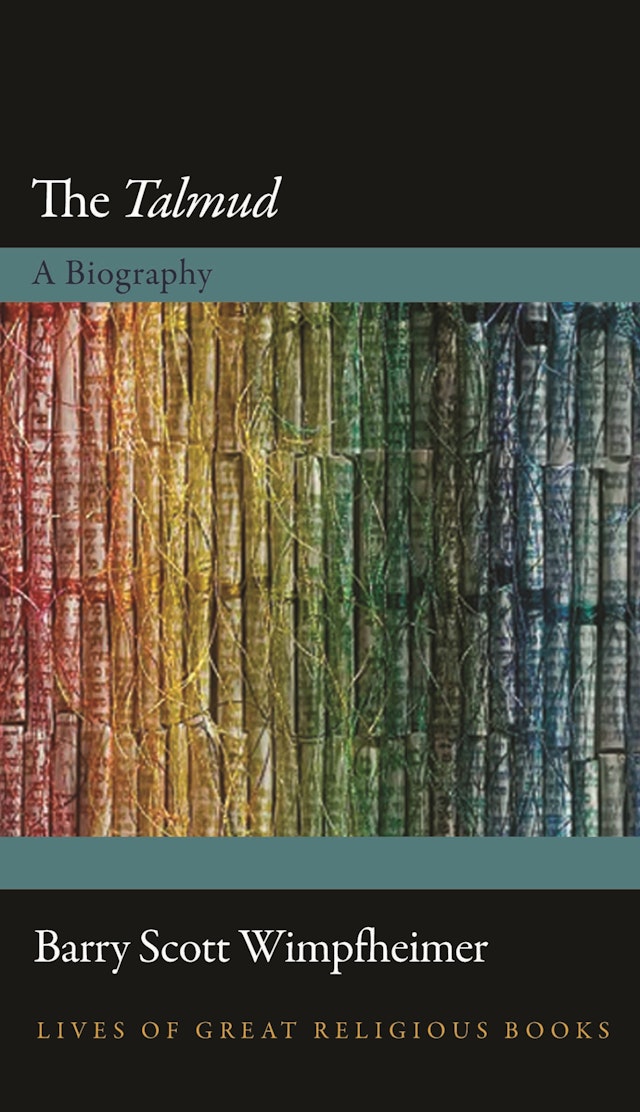 The Babylonian Talmud, a postbiblical Jewish text that is part scripture and part commentary, is an unlikely bestseller. Written in a hybrid of Hebrew and Aramaic, it is often ambiguous to the point of incomprehension, and its subject matter reflects a narrow scholasticism that should hardly have broad appeal. Yet the Talmud has remained in print for centuries and is more popular today than ever. Barry Scott Wimpfheimer tells the remarkable story of this ancient Jewish book and explains why it has endured for almost two millennia.

Providing a concise biography of this quintessential work of rabbinic Judaism, Wimpfheimer takes readers from the Talmud’s prehistory in biblical and second-temple Judaism to its present-day use as a source of religious ideology, a model of different modes of rationality, and a totem of cultural identity. He describes the book’s origins and structure, its centrality to Jewish law, its mixed reception history, and its golden renaissance in modernity. He explains why reading the Talmud can feel like being swept up in a river or lost in a maze, and why the Talmud has come to be venerated — but also excoriated and maligned—in the centuries since it first appeared.

An incomparable introduction to a work of literature that has lived a full and varied life, this accessible book shows why the Talmud is at once a received source of traditional teachings, a touchstone of cultural authority, and a powerful symbol of Jewishness for both supporters and critics.

Barry Scott Wimpfheimer is associate professor of religious studies and law at Northwestern University and the author of Narrating the Law: A Poetics of Talmudic Legal Stories.

"First, Wimpfheimer traces the details of both discussions, but especially the halachic discussion, in close and fine detail within the talmudic text. His deconstruction of the halachic text in particular is masterful."—David Reuben, Jewish Chronicle

"Wimpfheimer takes the reader by the hand and walks through the many hair-splitting complexities of the Talmud, its evolution and its impact."—Patrick T. Reardon, Chicago Tribune

"The question therefore becomes how exactly such literary and historical analysis is arriving to the ‘essential’ Talmud rather than to the new 'enhanced' understanding of it. The answer to this question is in the author’s complex and carefully calibrated framing of the book as 'biography.'"—Sergey Dolgopolski, Reading Religion

"Wimpfheimer brilliantly opens the door into the complex and fascinating world of textual study, allowing readers to comprehend the origins, structure, and impact of this foundational Jewish text. Erudite and accessible, this is a book for anyone who wants a deeper understanding of the centrality of the Talmud in Jewish scholarship and life."—Tova Mirvis, author of The Book of Separation: A Memoir

"Wimpfheimer provides a masterful and subtle exposition of the complex ways in which the Talmud was formed and received through the generations. His unique capacity to explore this rich history from the dual perspectives of the internal development of Talmudic interpretation and the external reactions and reception is at the root of what makes this book so exquisite."—Moshe Halbertal, coauthor of The Beginning of Politics: Power in the Biblical Book of Samuel

"Wimpfheimer brings a rare combination of talents to this book: a scholar's familiarity with the Talmud's compositional and reception history, a critic's sensitivity to the Talmud's distinctive literary texture, and a public intellectual's feel for the pulse of modernity. The book tells you what the Talmud is and has been, and why it matters as much as or indeed more than ever."—Tzvi Novick, author of What Is Good, and What God Demands

"A very fine book. Wimpfheimer is a first-rate expositor."—Daniel Boyarin, author of A Traveling Homeland: The Talmud as Diaspora