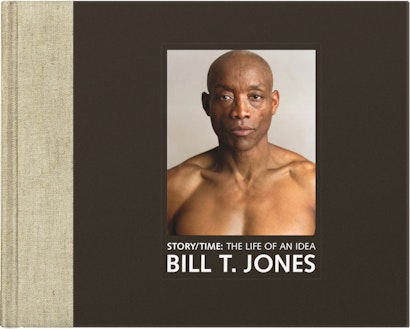 In this ceaselessly questioning book, acclaimed African American dancer, choreographer, and director Bill T. Jones reflects on his art and life as he describes the genesis of Story/Time, a recent dance work produced by his company and inspired by the modernist composer and performer John Cage. Presenting personally revealing stories, richly illustrated with striking color photographs of the work’s original stage production, and featuring a beautiful, large-format design, the book is a work of art in itself.

Like the dance work, Story/Time the book is filled with telling vignettes—about Jones’s childhood as part of a large, poor, Southern family that migrated to upstate New York; about his struggles to find a place for himself in a white-dominated dance world; and about his encounters with notable artists and musicians. In particular, Jones examines his ambivalent attraction to avant-garde modernism, which he finds liberating but also limiting in its disregard for audience response. As he strives to make his work more personal and broadly engaging, especially to an elusive African American audience, Jones—who is still drawn to the avant-garde—wrestles with questions of how an artist can remain true to himself while still caring about the popular reception of his work.

A provocative meditation on the demands and rewards of artistic creation, Story/Time is an inspiring and enlightening portrait of the life and work of one of the great artists of our time.

Bill T. Jones is an acclaimed dancer, choreographer, and director. He is the artistic director, cofounder, and choreographer of the Bill T. Jones/Arnie Zane Dance Company and executive artistic director of New York Live Arts. He is the recipient of many awards and honors, including Tony Awards for FELA! and Spring Awakening, a Kennedy Center Honor, and a MacArthur Fellowship. In 2014, President Barack Obama awarded Jones the National Medal of Arts, the country's highest honor for achievement in the arts.

"An experimental dancer/choreographer/performance artist improvises on the nature of story itself in a unique format. . . . A brave and often successful attempt to capture and display movement and intuition and the unspoken on the printed page."—Kirkus Reviews

"Story/Time: The Life of an Idea is an ethereal memoir emblematic of this iconoclastic trailblazer's unpredictable approach to everything he does."—Kam Williams, AALBC.com

"Readers interested in the intersection of dance, performance art, and the world of ideas will gain insight and inspiration from this thoughtful and singular work."—Carolyn M. Mulac, Library Journal

"With the book, Jones attempts to explore the vital nature of his stage production back to its origins. . . . Anyone who has seen Jones' work has likely felt the need to press the 'pause' button; it carries a hypnotic current, a sense of relentless forward movement. This book, then, provides an ideal counterpoint. It suspends time, allowing Jones' story and space to unfold."—Jennifer Day, Chicago Tribune

"As a written document, this book is clearly organized, quickly read, and dense with musings that can be dissected by dancers and non-dancers alike. As a piece of art, it is both process and product in one. The engagement and participation of audience member might be enhanced if the book is read and discussed in a group setting, which makes me curious to see how it will fit with the live performance and how many people will pair the two. The experiment in creation, design and performance certainly poses many questions that, identifying as a dance artist, I found myself musing in the context of own work. Likewise, as an academic, I found I was concurrently dissecting the book for use in a future class. I found the 'provocation' of personal context and its link to the audience's experience of art particularly poignant."—Katie C. Sopoci Drake, 4Dancers

"Story/Time: The Life of an Idea, by the acclaimed dancer and choreographer Bill T. Jones, is an odd amalgam of texts. In the preface, Jones tells the reader that 'The object you are holding in your hands is conflicted. It is a performance yearning to be a document, a book. . . . It is the record of a needy, angry and confused man. The need is for a tradition, an intellectual home. The anger is generated from an ever-maturing realization that I never truly had an intellectual home and never will.' Throughout the book's three sections, this conflict between performance and document was both frustrating and riveting, and ultimately, satisfying."—Alexis Camins, TruthDig.com

"Bill T. Jones has always been on the forefront of powerful hybrid art forms, whether it's politics and dance or Broadway and edgy. In Story/Time, he spins John Cage. A master of timing, Jones applies Cage's rigor to his own work, adding his own style and warmth. Story/Time's choreographed language is a beautiful new realm."—Laurie Anderson

"One of America's iconic dancers and choreographers gives us an insight into his inspirations and processes, in a series of vivid vignettes of being, thinking, and doing, which is to say, of living. A fascinating text."—Salman Rushdie

"A miraculous time spent in the company of Bill T. Jones, as he questions, conjectures, and responds to the words, thoughts, and works of John Cage. It is a gift to the world of ideas, and to us all."—Damian Woetzel, director of the Aspen Institute Arts Program

"Jones's honesty and unmistakable voice reveal his artistic struggle to find his place in relationship to Cage, an artist whose ideas and teachings he both admires and questions. This rich document offers the reader access to the life, work, and creative processes of this important and influential American choreographer."—Susan Marshall, director of dance at Princeton University's Lewis Center for the Arts and artistic director of Susan Marshall & Company