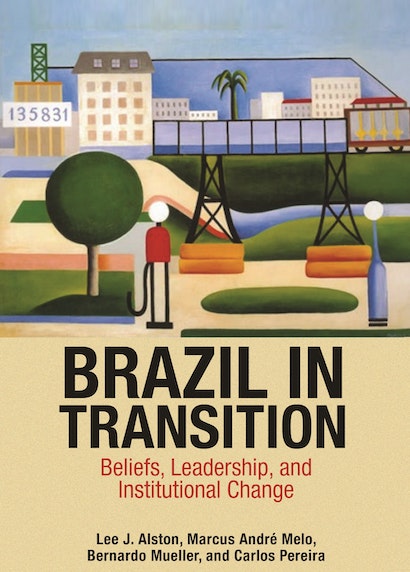 Brazil is the world’s sixth-largest economy, and for the first three-quarters of the twentieth century was one of the fastest-growing countries in the world. While the country underwent two decades of unrelenting decline from 1975 to 1994, the economy has rebounded dramatically. How did this nation become an emerging power? Brazil in Transition looks at the factors behind why this particular country has successfully progressed up the economic development ladder. The authors examine the roles of beliefs, leadership, and institutions in the elusive, critical transition to sustainable development.

Analyzing the last fifty years of Brazil’s history, the authors explain how the nation’s beliefs, centered on social inclusion yet bound by orthodox economic policies, led to institutions that altered economic, political, and social outcomes. Brazil’s growth and inflation became less variable, the rule of law strengthened, politics became more open and competitive, and poverty and inequality declined. While these changes have led to a remarkable economic transformation, there have also been economic distortions and inefficiencies that the authors argue are part of the development process.

Brazil in Transition demonstrates how a dynamic nation seized windows of opportunity to become a more equal, prosperous, and rules-based society.

"Brazil is the world's sixth-largest economy and fifth-largest nation, and its transformation has long piqued the interest of scholars and observers. In this engaging book, Alston and his Brazilian colleagues Melo, Mueller, and Pereira examine this transformation by asking how Brazil became an emerging power during the 20th century. . . . Brazil in Transition is a valuable contribution to the understanding of why nations develop and the struggles they face in the process."—Choice

"Brazil in Transition is an intriguing book that holds the reader's attention throughout."—Leonardo Weller, EH.net

"A comprehensive account. . . . Alston, Melo, Mueller and Pereira should be applauded for developing an alternative model to explain Brazilian development under democracy. Their book makes an important contribution by featuring an analytical narrative that indirectly raises important questions about the sources of economic and social policymaking."—Mark S. Langevin, The London School of Economics and Political Science Review of Books

"Possibly the biggest thing we don't understand in social science is how and why a society moves from one institutional equilibrium to another. To tackle this you need history, economics, political science, sociology, and psychology. This pathbreaking book on the emergence of a new Brazil incorporates all of these and more."—James Robinson, coauthor of Why Nations Fail: The Origins of Power, Prosperity, and Poverty

"In contrast to the conventional wisdom that attributes development to geography, policies, culture, and luck, the authors of Brazil in Transition persuasively show that the transformation of institutions and beliefs, the role of leadership, and the seizing of opportunities account for Brazil's economic performance during the last few decades. This is a powerful framework and argument, elaborated intensively for the Brazilian case, but clearly appropriate to other developing economies around the world."—Kenneth Shepsle, Harvard University

"This book makes the optimistic case for the future of democracy, showing how an autocratic, cronyistic regime can transform itself into a democracy that combines a long-term focus on social inclusion with rational economic policy. An accessible, learned, and compelling account."—Charles Calomiris, coauthor of Fragile by Design: The Political Origins of Banking Crises and Scarce Credit

"Brazil in Transition offers a bold and challenging hypothesis: that Brazil is in the process of transitioning from a society with limited civil and political rights, weak economic resiliency and competition, and an unstable set of political institutions and regimes, to a society with secure rights, a resilient economy, and stable political institutions unaffected by changes in regimes. The authors offer a new conceptual framework based on leadership and beliefs, as well as a striking and informative historical narrative of Brazil in the last fifty years. A fascinating account and analysis."—John Joseph Wallis, coauthor of Violence and Social Orders: A Conceptual Framework for Interpreting Recorded Human History

"This fascinating look at the political economy of Brazil emphasizes the role of networks and beliefs in facilitating the nation's transition toward a more widely shared prosperity. The book is rich with detail, and is required reading for anyone interested in the Brazilian economy."—John Londregan, Princeton University

"With novel arguments, this book lays out an analytic narrative of Brazil's recent political transition and why it has led to profound socioeconomic changes. This major work will make us rethink what we knew about Brazil and considers whether it might finally live up to its promise as a country of the future."—Noel Maurer, George Washington University

"Exploring Brazil's stunning—if incomplete—economic progress of recent decades and the unexpected institutional shifts that underscored it, this book posits a new framework for understanding economic development in the modern era. Firmly grounded in history and sound scholarship, Brazil in Transition does an outstanding job delving into the Brazilian experience from 1964 to today."—Anne G. Hanley, Northern Illinois University