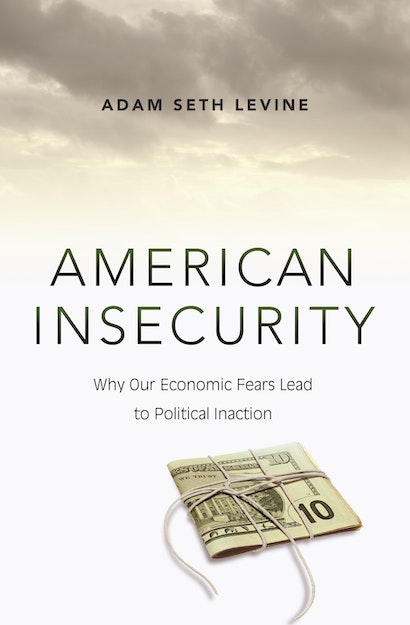 Americans today face no shortage of threats to their financial well-being, such as job and retirement insecurity, health care costs, and spiraling college tuition. While one might expect that these concerns would motivate people to become more politically engaged on the issues, this often doesn’t happen, and the resulting inaction carries consequences for political debates and public policy. Moving beyond previously studied barriers to political organization, American Insecurity sheds light on the public’s inaction over economic insecurities by showing that the rhetoric surrounding these issues is actually self-undermining. By their nature, the very arguments intended to mobilize individuals—asking them to devote money or time to politics—remind citizens of their economic fears and personal constraints, leading to undermobilization and nonparticipation.

Adam Seth Levine explains why the set of people who become politically active on financial insecurity issues is therefore quite narrow. When money is needed, only those who care about the issues but are not personally affected become involved. When time is needed, participation is limited to those not personally affected or those who are personally affected but outside of the labor force with time to spare. The latter explains why it is relatively easy to mobilize retirees on topics that reflect personal financial concerns, such as Social Security and Medicare. In general, however, when political representation requires a large group to make their case, economic insecurity threats are uniquely disadvantaged.

Adam Seth Levine is an assistant professor in the Department of Government at Cornell University. He has published in a variety of outlets such as the Journal of Politics, Political Analysis, Review of Behavioral Economics, and Political Communication. His work has won numerous awards, including the 2011 E. E. Schattschneider Prize. This prize is the highest dissertation award in the field of American government and is given annually by the American Political Science Association.

"Levine provides evidence that financially anxious people respond to their stress not by grouping together for action but by becoming less generous with their checkbooks and personal time."—Pacific Standard

"This provocative volume identifies the ‘self-undermining' political rhetoric inherent in the discussion of important economic issues as the driving reason contemporary working-and middle-class Americans have not produced political movements corresponding to the scale of the financial challenges they face. . . . The research presented here is an interesting, well-defended addition to the literature on the nature of collective political action."—Choice

"Powerful and highly accessible. . . . Levine has succeeded in shining a light on the disconcerting reality that many citizens abstain from getting involved in addressing the very issues that deeply affect and permeate their everyday lives."—John V. Kane and Jason Barabas, Journal of Politics

"The book does a wonderful job of highlighting political interest and (lack of) activity around a set of important social issues, but the contribution to a larger theory of participation is important as well. . . . The book should be appreciated by scholars of political behavior, political psychology, or political rhetoric who should welcome the theory and analysis that Levine provides in demonstrating the self-undermining nature of certain types of political rhetoric."—Hans Hassell, Public Opinion Quarterly

"I admire American Insecurity for several reasons. The author is quite transparent about his assumptions and procedures, and his writing is to the point and jargon free. The main findings (in Chapters 5 and 6) should interest academics and should give parties and interest groups insights into mobilizing citizens more effectively. Finally, Levine has found a way to explain nonparticipation in politics besides indifference, alienation, or abject poverty. The people at the heart of this book are trying hard to sustain their standard of living, and harping on their financial insecurities is not likely to make them engage more with politics. That sort of mindset does not make them small- minded or self-centered, in my view; it makes them human."—Christopher Howard, Perspectives on Politics

"The worst economic crisis since the Great Depression, growing financial threats to the middle class, and the biggest political movement is the antigovernment Tea Party. What gives? The answer is that Americans buffeted by economic risks don't give. They don't give money or time to political organizations seeking to improve economic security. When you try to rally people to the cause, you inadvertently but powerfully deter their political participation. Levine has provided a compelling new account of a profound, and profoundly important, paradox."—Jacob S. Hacker, author of The Great Risk Shift

"In American Insecurity, Levine develops a rich, interdisciplinary theory to explain why it's difficult to mobilize people around issues related to economic insecurity. Levine demonstrates the causal, demobilizing influence of what he calls 'self-undermining rhetoric'—rhetoric that reminds people they themselves face the very financial threats that they're being asked to mobilize to prevent. Well-written and intellectually stimulating, this book will make a significant contribution to the field."—Joanne Miller, University of Minnesota

"In this book, Levine dramatically reduces the untenable arc of inference drawn from the lack of large-scale collective action addressing problems of American financial insecurity. Arguing that political appeals on these kinds of issues have a uniquely demobilizing impact, Levine offers a more plausible explanation for our political impasse that is firmly grounded in innovative research, fresh theorizing, and unusual insight into the financial stresses of modern American life."—Leslie McCall, Northwestern University

"Developing a groundbreaking theory about the difficulties of collective action in American politics, this book considers how interest groups, public political participation, and the responsiveness of elected officials play a role in the distinct lack of policies aimed at ameliorating the effects of economic insecurity in the United States. One of the most important books in decades." —James N. Druckman, Northwestern University

"American Insecurity addresses a wide range of political situations to explain why the economic dislocations that have affected tens of millions of Americans have not led to political countermobilization. It presents an entirely novel idea: that self-undermining rhetoric will systematically lead to undermobilization precisely when specific challenges are discussed. This book is a winner."—Frank R. Baumgartner, University of North Carolina, Chapel Hill