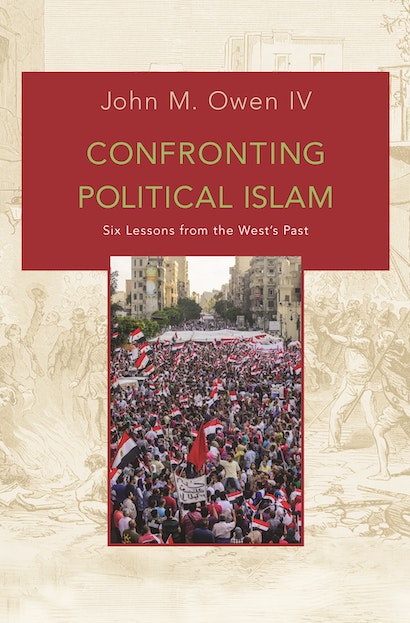 Political Islam has often been compared to ideological movements of the past such as fascism or Christian theocracy. But are such analogies valid? How should the Western world today respond to the challenges of political Islam? Taking an original approach to answer this question, Confronting Political Islam compares Islamism’s struggle with secularism to other prolonged ideological clashes in Western history. By examining the past conflicts that have torn Europe and the Americas—and how they have been supported by underground networks, fomented radicalism and revolution, and triggered foreign interventions and international conflicts—John Owen draws six major lessons to demonstrate that much of what we think about political Islam is wrong.

Owen focuses on the origins and dynamics of twentieth-century struggles among Communism, Fascism, and liberal democracy; the late eighteenth- and nineteenth-century contests between monarchism and republicanism; and the sixteenth- and seventeenth-century wars of religion between Catholics, Lutherans, Calvinists, and others. Owen then applies principles learned from the successes and mistakes of governments during these conflicts to the contemporary debates embroiling the Middle East. He concludes that ideological struggles last longer than most people presume; ideologies are not monolithic; foreign interventions are the norm; a state may be both rational and ideological; an ideology wins when states that exemplify it outperform other states across a range of measures; and the ideology that wins may be a surprise.

Looking at the history of the Western world itself and the fraught questions over how societies should be ordered, Confronting Political Islam upends some of the conventional wisdom about the current upheavals in the Muslim world.

John M. Owen IV is professor of politics and a faculty fellow at the Institute for Advanced Studies in Culture at the University of Virginia. His books include The Clash of Ideas in World Politics (Princeton) and Liberal Peace, Liberal War.

"Owen is generous, rational and balanced. . . . [H]e is astute enough to understand the vast real-world differences that block the resolution of conflict."—Publishers Weekly

"This engaging and thoughtful book by University of Virginia scholar John Owen looks back on a series of upheavals in Western history to better understand the Middle East's current travails and challenges posed by political Islam. . . . [A] wise and sophisticated book."—William Armstrong, Hurriyet Daily News

"Owen writes to provide policy makers, students, and those engaged in the Middle East with tools to confront political Islam. . . . This is a unique, stimulating, well-written and documented work that takes an unusual approach to the political problems of Islamism."—Choice

"A highly recommended work for observers, students, and research scholars who are grappling with the contemporary problems faced by the Middle East through the prism of political disturbances in the past centuries of Western history."—Mehraj ud Din, Politics, Religion, & Ideology

"A solid and thoughtful engagement with a wider spectrum of important yet intricate scholarly concerns about Islamist notions of space and subjectivity."—Asif Mohiuddin, Journal of Religion and Theology

"[Confronting Political Islam] is very timely and offers significant food for thought for both scholars and policy makers alike, irrespective of whether the reader necessarily agrees with the intellectual framing or generalized approach."—Joshua M. Roose, Journal of Global Analysis

"Through a systematic, rigorous comparison of the trajectory of historical ideological conflicts in Europe during the last five centuries and today's struggles over Islamism in the Middle East, Owen draws insightful conclusions about the future of political Islam and U.S. policy responses. His book is sure to advance understanding of the defining ideological debate of our time—that of Islam's role in political transitions throughout the Muslim world."—Lisa Curtis, Heritage Foundation

"Many people talk about the 'lessons of history,' but Owen actually delivers them. With erudition, balance, and good judgment, he uses the history of ideological conflict in the West to discern guidelines for how to deal with the challenge to American interests presented by contemporary Islamist politics in all its forms. This is a wise and well-reasoned book."—F. Gregory Gause III, Texas A&M University

"Critiques of Islamic fundamentalism rarely seek parallels in Western history. Owen assesses Islamism and offers perceptive, provocative comparisons to the historical conflicts among Protestants and Catholics, and liberals, socialists, and communists. Showing that the duel between Islamists and Muslim secularists is far from over, he explores how it has challenged and changed the West. Scholars, officials, soldiers, and students would do well to read this book."—Reuel M. Gerecht, Foundation for Defense of Democracies

"With an innovative approach, Owen provocatively argues that previous episodes and ideological battles in Western history can shed light on the questions and likely political developments in the Muslim world today. The topic is very important and will spark many reactions and discussions."—Jeremy Pressman, University of Connecticut