How U.S. senators were chosen prior to the Seventeenth Amendment—and the consequences of Constitutional reform 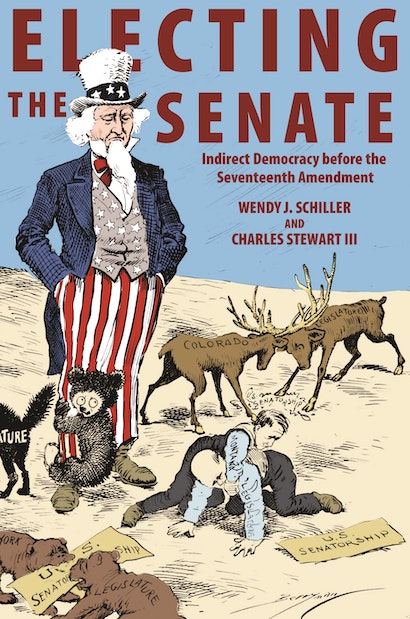 From 1789 to 1913, U.S. senators were not directly elected by the people—instead the Constitution mandated that they be chosen by state legislators. This radically changed in 1913, when the Seventeenth Amendment to the Constitution was ratified, giving the public a direct vote. Electing the Senate investigates the electoral connections among constituents, state legislators, political parties, and U.S. senators during the age of indirect elections. Wendy Schiller and Charles Stewart find that even though parties controlled the partisan affiliation of the winning candidate for Senate, they had much less control over the universe of candidates who competed for votes in Senate elections and the parties did not always succeed in resolving internal conflict among their rank and file. Party politics, money, and personal ambition dominated the election process, in a system originally designed to insulate the Senate from public pressure.

Electing the Senate uses an original data set of all the roll call votes cast by state legislators for U.S. senators from 1871 to 1913 and all state legislators who served during this time. Newspaper and biographical accounts uncover vivid stories of the political maneuvering, corruption, and partisanship—played out by elite political actors, from elected officials, to party machine bosses, to wealthy business owners—that dominated the indirect Senate elections process. Electing the Senate raises important questions about the effectiveness of Constitutional reforms, such as the Seventeenth Amendment, that promised to produce a more responsive and accountable government.

"Schiller and Stewart develop a database of breathtaking proportions to provide insight into the politics of indirect election of senators, and the consequences of direct and indirect election on electoral responsiveness. Rather than a dusty account of a long-forgotten reform, this book has implications for understanding the modern Senate."—Choice

"With the Seventeenth Amendment back in the news, Schiller and Stewart reexamine how state legislatures elected U.S. senators, to determine whether indirect elections were as unsavory and ineffective as charged, and whether popular elections have worked as well as reformers predicted. Their findings may surprise those on both sides of the ongoing debate."—Donald A. Ritchie, author of The U.S. Congress: A Very Short Introduction

"This eye-opening book examines some of the most important questions in the development of representative government in the United States. It explores the often disastrous consequences of the original Constitutional scheme, the ways in which party politics and corruption can overtake deliberative processes, the unfulfilled promises of reformers, and the institutional conditions that foster government responsiveness and accountability. Everyone interested in American politics must read this book."—Steven S. Smith, Washington University in St. Louis

"This is a fine book by two of the most accomplished and able scholars studying the U.S. Congress. Their findings will undoubtedly become the definitive work on how the indirect election of U.S. senators by individual state legislatures influenced the upper chamber of Congress and American politics."—Richard Bensel, Cornell University

"The U.S. Senate is front and center in determining policy in America, and given its importance, it is critical to understand the relationship of its members to constituents. Based on a careful and massive collection of original data, this excellent book provides a clear picture of indirect Senate elections and their consequences." —John Lapinski, University of Pennsylvania