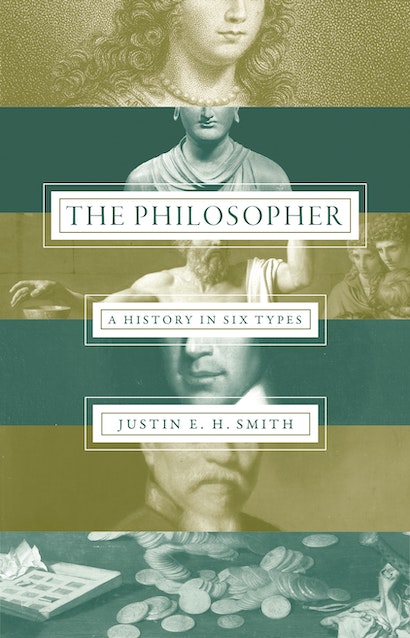 By uncovering forgotten or neglected philosophical job descriptions, the book reveals that philosophy is a universal activity, much broader—and more gender inclusive—than we normally think today. In doing so, The Philosopher challenges us to reconsider our idea of what philosophers can do and what counts as philosophy.

Justin E. H. Smith is university professor of the history and philosophy of science at the Université Paris Diderot—Paris VII. He is the author of Nature, Human Nature, and Human Difference: Race in Early Modern Philosophy and Divine Machines: Leibniz and the Sciences of Life (both Princeton). He writes frequently for the New York Times, Harper's Magazine, Cabinet Magazine, and other publications.

"The Philosopheris a fun book to read for anyone, professional philosophers included."—Siddharth Singh, Open Magazine

"The strength of Smith's approach is to demonstrate philosophical thought in action, and the book comes into its own when introducing readers to philosophers outside the recognized canon."—Joe Humphreys, Irish Times

"The array of thinkers cited is gender and culture inclusive, and the writing style is stylish and interspersed with touches of humor."—Choice

"A thoughtful, provocative, and quietly confident account of what it is to do philosophy."—Sarah Gustafson, Key Reporter

"This is a lovely book: honest and open-minded, it is seeking to do something genuinely important. I wish more books in philosophy were as generous as this one is in its desire to hold things open and in its willingness genuinely to listen to multiple voices."—Christopher Hamilton, Notre Dame Philosophical Reviews

"Justin Smith's graceful and lucidly argued history of philosophy asks us to rethink our assumptions about both history and philosophy. More than a survey, full of surprising selections and juxtapositions, Smith's work holds delights for any curious reader and raises important challenges to the dominant categories of philosophy and philosophers in the contemporary university. A much-needed book, both inside and outside the academy."—Marco Roth, editor and cofounder of n+1magazine

"Justin Smith's The Philosopher is erudite, incisive, beautifully written, and often hilarious—a wild and exhilarating examination of the ambitions of philosophers to understand life from more perspectives than even Nietzsche would have dared. Smith is as comfortable and clever discussing Leibniz on Chinese theology as he is Laurence Sterne, T. S. Eliot, or J. M. Coetzee. If you like philosophy, you will be delighted with this book."—Clancy Martin, author of Love and Lies

"Sophisticated and provocative, The Philosopher is an outstanding exploration of possible ways to redefine philosophy today by examining its multifaceted pasts. One of the book's most exciting aspects is the way it revises the Eurocentric view of philosophy by using a very original global framework."—Stéphane van Damme, European University Institute, Florence

"The Philosopher is a terrific, much-needed, and important book that should be read by all philosophers. Smith's thoughtfulness is as illuminating as his erudition is astonishing."—Aaron Garrett, Boston University