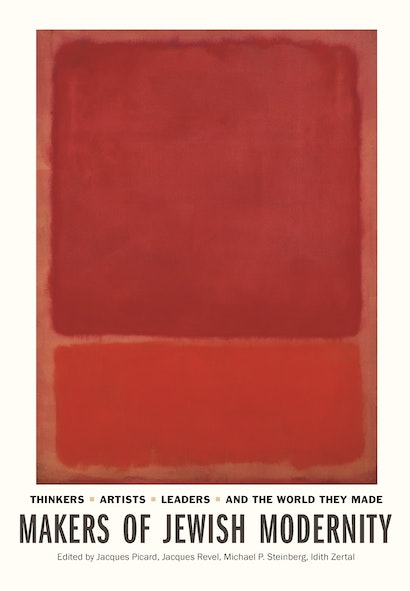 This superb collection presents more than forty incisive portraits of leading Jewish thinkers, artists, scientists, and other public figures of the last hundred years who, in their own unique ways, engaged with and helped shape the modern world.

Makers of Jewish Modernity features entries on political figures such as Walther Rathenau, Rosa Luxemburg, and David Ben-Gurion; philosophers and critics such as Walter Benjamin, Hannah Arendt, Isaiah Berlin, Jacques Derrida, and Judith Butler; and artists such as Mark Rothko. The book provides fresh insights into the lives and careers of novelists like Franz Kafka, Saul Bellow, and Philip Roth; the filmmakers Joel and Ethan Coen; social scientists such as Sigmund Freud; religious leaders and thinkers such as Avraham Kook and Martin Buber; and many others. Written by a diverse group of leading contemporary scholars from around the world, these vibrant and frequently surprising portraits offer a global perspective that highlights the multiplicity of Jewish experience and thought.

A reference book like no other, Makers of Jewish Modernity includes an informative general introduction that situates its subjects within the broader context of Jewish modernity as well as a rich selection of photos.

Jacques Picard is professor of modern and Jewish history and cultures at the University of Basel in Switzerland. Jacques Revel is a cultural historian and former president of the École des Hautes Études en Sciences Sociales in France. Michael P. Steinberg is vice provost for the arts, the Barnaby Conrad and Mary Critchfield Keeney Professor of History, and professor of music and German studies at Brown University. Idith Zertal is an Israeli historian and essayist who has taught at the University of Basel, the Interdisciplinary Center Herzliya, and the Hebrew University of Jerusalem. Professor Zertal's books and essays have been published in many languages.

"Rewarding collection of forty-four essays on Jewish thinkers and creators, from Freud to Judith Butler. . . . The collection as a whole casts a sharp new light on the modern world."—Ritchie Robertson, Times Literary Supplement

"The editors of [Makers of Jewish Modernity] exceed their stated goal of showing how various Jewish public figures ‘transformed the 20th century,' through 43 profiles of subjects both expected . . . and surprising. . . . The entries, which assume no prior knowledge, convey a great deal of information and cogent analysis in a short space."—Publishers Weekly

"A worthwhile collection for scholars and readers interested in Jewish affairs."—Kirkus

"This is probably the most important collection of essays on modern Jewish thinkers to have been published for many years, and an eloquent testimony to the importance of Jewish scholarship, science and philosophy in the shaping of the modern world. . . . Makers of Jewish Modernity is a masterpiece collection that deserves to be on the bookshelves of every serious Jew, and is a potential source of years of gratifying learning."—Rabbi Dr. Charles Middleburgh, Charles Middleburgh Blog

"Substantial. . . . It weaves together accounts of both the thoughts and lives of these varied but influential twentieth-century Jews."—Theology

"A rich, fresh, and important contribution to the literature on Jewish modernity."—Daniel B. Schwartz, author of The First Modern Jew: Spinoza and the History of an Image

"Intriguing, stimulating, and enjoyable. These intelligent, informative essays are marvels of concision and presentation."—Jeremy Dauber, author of The Worlds of Sholem Aleichem: The Remarkable Life and Afterlife of the Man Who Created Tevye