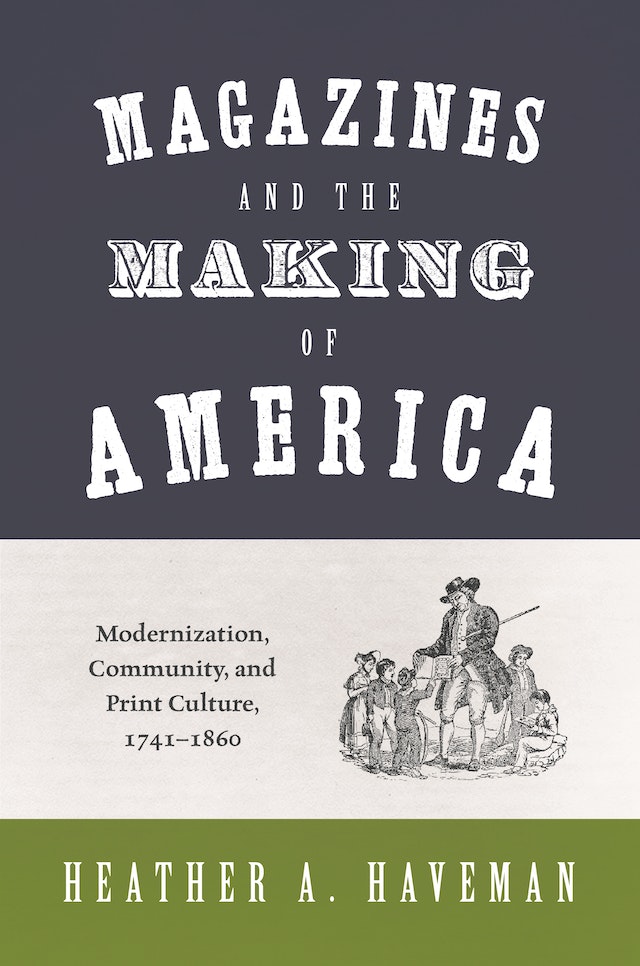 From the colonial era to the onset of the Civil War, Magazines and the Making of America looks at how magazines and the individuals, organizations, and circumstances they connected ushered America into the modern age. How did a magazine industry emerge in the United States, where there were once only amateur authors, clumsy technologies for production and distribution, and sparse reader demand? What legitimated magazines as they competed with other media, such as newspapers, books, and letters? And what role did magazines play in the integration or division of American society?

From their first appearance in 1741, magazines brought together like-minded people, wherever they were located and whatever interests they shared. As America became socially differentiated, magazines engaged and empowered diverse communities of faith, purpose, and practice. Religious groups could distinguish themselves from others and demarcate their identities. Social-reform movements could energize activists across the country to push for change. People in specialized occupations could meet and learn from one another to improve their practices. Magazines built translocal communities—collections of people with common interests who were geographically dispersed and could not easily meet face-to-face. By supporting communities that crossed various axes of social structure, magazines also fostered pluralistic integration.

Looking at the important role that magazines had in mediating and sustaining critical debates and diverse groups of people, Magazines and the Making of America considers how these print publications helped construct a distinctly American society.

Heather A. Haveman is professor of sociology and business at the University of California, Berkeley.

"[Magazines and the Making of America] is a work of sociology and as such it contributes to the growing literature on print culture by considering how the demography, geography, and economics of print fueled (and were fueled by) capitalism."—Choice

"Magazines and the Making of America is a treasure trove for students of social movements and political history, for it chronicles the scores of movements, from anti-dueling to Indian rights to free love, that swept the nation. . . . A bright star to guide others applying the new methods of social science to historical topics. Haveman has a penchant for coding and counting everything in sight. She tracks each broadside and circular from before the dawn of the nation, and thus we get much more than an impressionistic romp through the history of the genre. The book is chock full of figures and analyses that substantiate the argument, and the narrative is followed by well over a hundred pages of appendices and bibliography."—Frank Dobbin., Administrative Science Quarterly

"Fills a large hole in the scholarship of early American magazines, finally putting their influence on a par with the much more widely studied newspaper form."—Kevin Lerner, Journal of Magazine & New Media Research

"An important reminder of print's history and influence on American culture."—Andrea McDonnell, Journal of American Culture

"Make no mistake, Magazines and the Making of America is a tour de force of historical, economic, and media sociology. For its methodological rigor, for its theoretical reach, for its historical breadth and richness, this is a book that will be pondered and built upon for many years to come."—Rodney Benson, American Journal of Sociology

"Haveman’s Magazines and the Making of America will remain a landmark in periodical studies. To see with her what periodicals accomplished from 1741 to 1860 may give us some confidence that they will continue to serve a vital role in the making of America."—Robert J. Scholnick, American Periodicals

"In this exciting new study of antebellum American magazines, Heather Haveman combines a polished narrative with quantitative data to argue persuasively that periodicals have been underappreciated but vital to the nation's literary and political culture. This book is one of the most significant investigations into American magazines since Frank Luther Mott's multivolume history several decades ago."—Jonathan Daniel Wells, University of Michigan

"Heather Haveman has created a comprehensive, rigorous, and profound explanation for the rise of American magazines. Her lucid, impressive research will prove invaluable to historians and sociologists while also engaging the interest of today's journalists."—Daniel Walker Howe, author of the Pulitzer Prize–winning What Hath God Wrought

"This superbly documented portrait of the magazine industry from 1741 to 1860 provides a window into the process by which organizations emerge and transform American society. Heather Haveman is a skilled investigator who commands sophisticated social science tools, possesses deep historical knowledge, and has a gift for words, and she shows that magazines can be instruments of both social change and social control. I highly recommend this book."—Howard Aldrich, University of North Carolina

"This book is a marvel of scholarship that marries organization theory with the history of magazines and publishing in America. It is a riveting account of how newspapers and magazines powered the social transformation of American life. Beckoning cultural historians and organization theorists alike, it is a must-read for both groups."—Hayagreeva Rao, Stanford University

"The place of magazines in the early American republic has long been one of media history's major lacunas. Haveman's book makes remarkable strides toward filling this void by documenting the indispensable work that magazines performed in building ties through which many Americans became enmeshed in national causes. Haveman offers a fresh interpretation of American print culture and the making of modernity."—Richard K. Popp, author of The Holiday Makers: Magazines, Advertising, and Mass Tourism in Postwar America

"By masterfully uncovering the mechanisms that explain how magazines facilitated translocal communities and the typology of American modernization, Haveman has written a landmark achievement. Magazines and the Making of America is a breakthrough in our understanding of the dynamic relationships between organizations, institutions, and society. Indeed, I am already citing this book in my own work."—Damon J. Phillips, author of Shaping Jazz

"Tracing founders, geographic locations, content, and relationships to major social movements, this book uncovers the largely forgotten history of magazines in the United States, from their origins in 1741 until the beginning of the Civil War. This definitive account explores the impact that this cultural medium had on the integration of America, and its close association with the religious, economic, and social fault lines that we continue to grapple with today."—Martin Ruef, Duke University