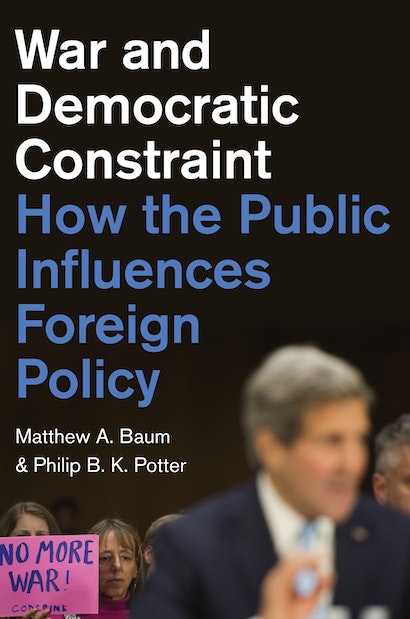 Why do some democracies reflect their citizens’ foreign policy preferences better than others? What roles do the media, political parties, and the electoral system play in a democracy’s decision to join or avoid a war? War and Democratic Constraint shows that the key to how a government determines foreign policy rests on the transmission and availability of information. Citizens successfully hold their democratic governments accountable and a distinctive foreign policy emerges when two vital institutions—a diverse and independent political opposition and a robust media—are present to make timely information accessible.

Matthew Baum and Philip Potter demonstrate that there must first be a politically potent opposition that can blow the whistle when a leader missteps. This counteracts leaders’ incentives to obscure and misrepresent. Second, healthy media institutions must be in place and widely accessible in order to relay information from whistle-blowers to the public. Baum and Potter explore this communication mechanism during three different phases of international conflicts: when states initiate wars, when they respond to challenges from other states, or when they join preexisting groups of actors engaged in conflicts.

Examining recent wars, including those in Afghanistan and Iraq, War and Democratic Constraint links domestic politics and mass media to international relations in a brand-new way.

Matthew A. Baum is the Marvin Kalb Professor of Global Communications and professor of public policy at Harvard University. He is the author of Soft News Goes to War and the coauthor of War Stories (both Princeton). Philip B. K. Potter is assistant professor of politics at the University of Virginia.

"A very thoughtful study about war initiation which can be the start for a true sociology of democratic institutions and their impact on war and peace."—Thomas Lindemann, European Review of International Studies

"Why are some democracies more sensitive than others to the foreign policy preferences of citizens? The answer that the book presents to this research question is innovative, thoroughly argued and consistently backed up by solid empirical research. . . . A seminal reading recommended for all scholars interested in the way domestic factors influence foreign policy."—Cristian Nitoiu, Political Studies Review

"Baum and Potter have provided us with a sweeping, insightful, and exciting new perspective on the role of democracy in foreign policy. Their work is certain to become the new standard for judging and evaluating future research in this area."—Christopher Gelpi, H-Diplo/ISSF Roundtable

"Those of us who study public opinion on matters of international relations and who have not given much thought to institutions now have to take even more seriously these questions because of this outstanding book."—Thomas J. Scotto, H-Diplo/ISSF Roundtable

"The book is a model not only in the huge substantive contribution but also in that it displays great rigor across multiple methods. It reveals just how far one can go when bringing substantive fields and varying methods together. War and Democratic Constraint is a book that everyone in political science should read, and I congratulate the authors for a crowning achievement."—James N. Druckman, Journal of Politics

"Taking us past democratic peace and other generalizations, Baum and Potter present a comparative and differentiated analysis that insightfully explains variations in the politics of the use of force among democracies, and integrates systemic factors including national political institutions and the interactions of the media, elites, and general public."—Bruce W. Jentleson, Duke University

"War and Democratic Constraint is a major achievement on several fronts. It offers evidence that public opinion can and does constrain government actions—in the foreign policy area no less. More importantly, it shows how this power to constrain is not the same for all democracies. The book demonstrates more than any work to date the value of studying the interplay of public opinion, the media, elite leadership, and policymaking."—Robert Y. Shapiro, Columbia University

"Answering important questions about foreign policy and leadership, this book is the first to comprehensively explore why some leaders are more constrained by public opinion than others. Baum and Potter look at aspects of democratic systems—political opposition, press freedom, and media access—in relation to their constraints on leadership. While there are works on democracy and democratization, none make the connections to media like this one does."—Patrick James, University of Southern California

"With War and Democratic Constraint, Baum and Potter have made a major advance in our understanding of how the news media does and does not enable the public to control its government. A seminal book on political communication and democratic responsiveness, this work will be read by scholars and students for years to come."—Jonathan M. Ladd, Georgetown University