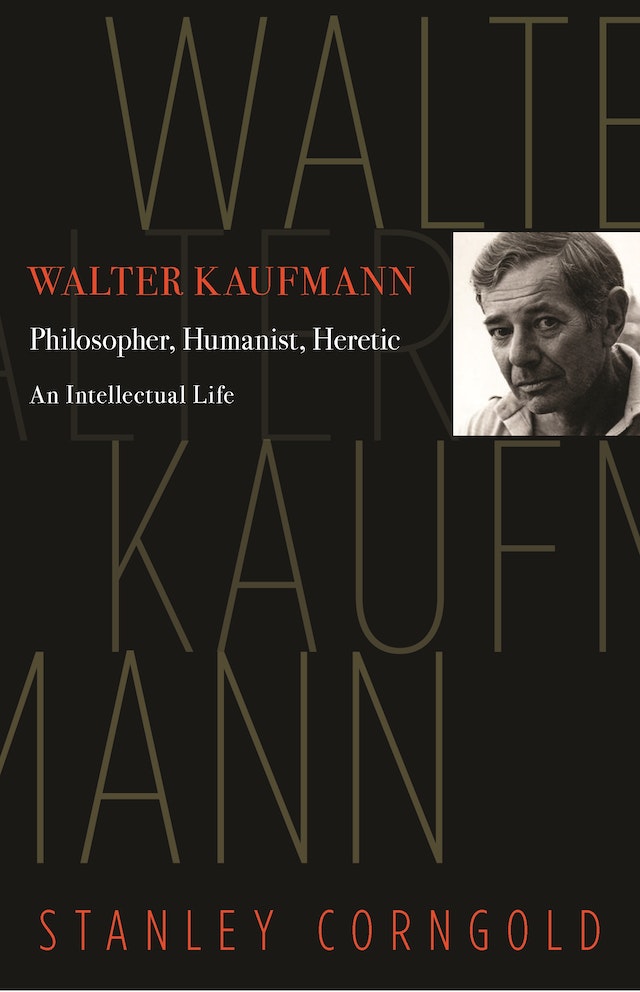 Walter Kaufmann (1921–1980) was a charismatic philosopher, critic, translator, and poet who fled Nazi Germany at the age of eighteen, emigrating alone to the United States. He was astonishingly prolific until his untimely death at age fifty-nine, writing some dozen major books, all marked by breathtaking erudition and a provocative essayistic style. He single-handedly rehabilitated Nietzsche’s reputation after World War II and was enormously influential in introducing postwar American readers to existentialism. Until now, no book has examined his intellectual legacy.

Stanley Corngold provides the first in-depth study of Kaufmann’s thought, covering all his major works. He shows how Kaufmann speaks to many issues that concern us today, such as the good of philosophy, the effects of religion, the persistence of tragedy, and the crisis of the humanities in an age of technology. Few scholars in modern times can match Kaufmann’s range of interests, from philosophy and literature to intellectual history and comparative religion, from psychology and photography to art and architecture. Corngold provides a heartfelt portrait of a man who, to an extraordinary extent, transfigured his personal experience in the pages of his books.

This original study, both appreciative and critical, is the definitive intellectual life of one of the twentieth century’s most engaging yet neglected thinkers. It will introduce Kaufmann to a new generation of readers and serves as a fitting tribute to a scholar’s incomparable libido sciendi, or lust for knowledge.

Stanley Corngold is professor emeritus of German and comparative literature at Princeton University. His many books include The Fate of the Self: German Writers and French Theory; Complex Pleasure: Forms of Feeling in German Literature; Lambent Traces: Franz Kafka (Princeton); and Franz Kafka: The Ghosts in the Machine. He lives in Princeton, New Jersey.

"In this new work, [Stanley] Corngold presents a historical account of philosopher Walter Kaufmann's writings, which ranged widely from ethics and religion to a major rethinking of Friedrich Nietzsche. Thorough and engaging, Corngold presents a vivid picture of Kaufmann's life through an analysis of his most influential works."—William Simkulet, Library Journal

"Corngold’s ‘philosophical biography’ portrays Kaufmann as a fascinating, admirable, and flawed character. After a brief biographical chapter, Corngold takes us through Kaufmann’s intellectual journey from his first book to his last. The detailed discussions of Kauf­mann’s individual works, supplemented by an array of philosophical and liter­ary references, are balanced and rich."—Lewis Rosenberg, Australian Book Review

"Corngold writes with a tenacity and intensity that matches his subject . . . [and] proves an admirable guide."—Robert L. Kehoe III, Los Angeles Review of Books

“Walter Kaufmann—philosopher, essayist, poet, translator, editor, teacher, world traveler, and photographer—was erudite, passionate, opinionated, and deeply controversial. In this sweeping intellectual biography, Stanley Corngold paints a lively and engaging portrait of a thinker whose views on philosophy, art, literature, politics, religion, and modernity remain of immediate importance today—a portrait that is as touching as it is compelling.”—Alexander Nehamas, author of Nietzsche: Life as Literature

“A deeply felt book. Stanley Corngold has the erudition needed to keep pace with Kaufmann’s extraordinary range of interests, both philosophical and literary.”—Martin Jay, author of Reason after Its Eclipse: On Late Critical Theory

“Practically every page of this fine book brims with insights. As Corngold very profoundly shows, the reason Walter Kaufmann’s work speaks to us today is that it reveals what the humanities can do for humanity.”—David Pickus, author of Dying with an Enlightening Fall: Poland in the Eyes of German Intellectuals, 1764–1800

“Was Kaufmann’s life tragic? Perhaps. But it would be a greater tragedy if this preternaturally prolific, intensely impassioned, and fundamentally humane thinker were to slip from our view. Stanley Corngold’s brilliantly written and profoundly generous book will go a long way to making sure that does not happen.”—Robert E. Norton, author of Secret Germany: Stefan George and His Circle