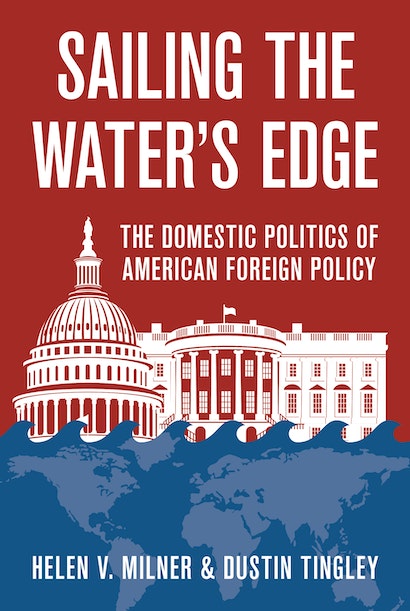 When engaging with other countries, the U.S. government has a number of different policy instruments at its disposal, including foreign aid, international trade, and the use of military force. But what determines which policies are chosen? Does the United States rely too much on the use of military power and coercion in its foreign policies? Sailing the Water’s Edge focuses on how domestic U.S. politics—in particular the interactions between the president, Congress, interest groups, bureaucratic institutions, and the public—have influenced foreign policy choices since World War II and shows why presidents have more control over some policy instruments than others. Presidential power matters and it varies systematically across policy instruments.

Helen Milner and Dustin Tingley consider how Congress and interest groups have substantial material interests in and ideological divisions around certain issues and that these factors constrain presidents from applying specific tools. As a result, presidents select instruments that they have more control over, such as use of the military. This militarization of U.S. foreign policy raises concerns about the nature of American engagement, substitution among policy tools, and the future of U.S. foreign policy. Milner and Tingley explore whether American foreign policy will remain guided by a grand strategy of liberal internationalism, what affects American foreign policy successes and failures, and the role of U.S. intelligence collection in shaping foreign policy. The authors support their arguments with rigorous theorizing, quantitative analysis, and focused case studies, such as U.S. foreign policy in Sub-Saharan Africa across two presidential administrations.

Sailing the Water’s Edge examines the importance of domestic political coalitions and institutions on the formation of American foreign policy.

Helen V. Milner is the B.C. Forbes Professor of Politics and International Affairs at Princeton University. Her books include Votes, Vetoes, and the Political Economy of International Trade Agreements and Interests, Institutions, and Information (both Princeton). Dustin Tingley is professor of government at Harvard University.

"Milner and Tingley provide a thorough examination of how presidential power in foreign policy is contingent on relations with domestic actors (Congress, interest groups, and the public). Their book is a welcome addition to the literature as the dominant assumption is that presidents are impervious to domestic pressure."—Choice

"This is one of those rare books that will provide an organizing principle for a substantial body of work that will inevitably follow it. By reframing the discourse of foreign policy in terms of competing actors and policy substitutions, Milner and Tingley have fundamentally changed how future scholars will both theorize about and measure foreign policy decisions. . . . I congratulate the authors on a tremendous acheivement."—Phil Potter, H-Net Reviews

"Foreign policy is notoriously resistant to theorizing. In Sailing the Water's Edge, Milner and Tingley make a significant advancement by generating and testing arguments about domestic constraints that explain why presidents choose to deploy various policy instruments. Rich in careful reasoning and data, this book will be the focus of the field for years to come."—Robert Jervis, author of American Foreign Policy in a New Era

"This is the most important book on U.S. foreign policy in decades. Milner and Tingley show decisively how domestic politics shape the choice of policy instruments, and why this matters for the nature and content of U.S. foreign relations. Synthetic and pathbreaking at the same time, Sailing the Water's Edge explodes the distinctions between high and low and domestic and international politics."—David A. Lake, University of California, San Diego

"Foreign policy is supposed to be a bundle of carrots and sticks that presidents can deploy at their discretion, depending on the nature of the adversary and the strategic game being played. Milner and Tingley stand this image on its head, suggesting that a decision to use sanctions or military force rather than trade or aid can equally be determined by a particular domestic distribution of interests. The policy implications of this book are likely to be felt for decades to come."—Anne-Marie Slaughter, president and CEO of New America

"In contrast to standard international relations accounts, which consider foreign policy to be driven by international factors, Milner and Tingley contend that domestic politics plays a major role in foreign policy decisions, and that certain foreign policy tools have major consequences domestically. Their book presents an original and provocative argument and substantiates it with a myriad of impressive new evidence."—James Raymond Vreeland, Georgetown University

"An engaging look at how politics between institutions within the United States shapes American foreign policy, Sailing the Water's Edge brings together an incredibly wide array of examples and sources, while covering a tremendous breadth of empirical ground. An important and welcome contribution to international relations, this book will be widely read."—Jon Pevehouse, University of Wisconsin–Madison