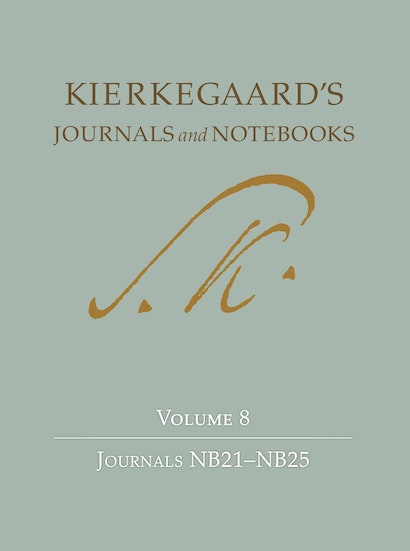 Volume 8 of this 11-volume series includes five of Kierkegaard’s important “NB” journals (Journals NB21 through NB25), which cover the period from September 1850 to June 1852, and which show Kierkegaard alternately in polemical and reflective postures.

The polemics emerge principally in Kierkegaard’s opposition to the increasing infiltration of Christianity by worldly concerns, a development that in his view had accelerated significantly in the aftermath of the political and social changes wrought by the Revolution of 1848. Kierkegaard understood the corrupting of Christianity to be in the interest of the powers that be, and he directed his criticism at politicians, the press, and especially the Danish Church itself, particularly church officials who claimed to be “reformers.”

On the reflective side, Kierkegaard delves into a number of authors and religious figures, some of them for the first time, including Montaigne, Pascal, Seneca, Savonarola, Wesley, and F. W. Newman. These journals also contain Kierkegaard’s thoughts on the decisions surrounding the publication of the “Anti-Climacus” writings: The Sickness unto Death and especially Practice in Christianity.

Kierkegaard’s reader gets the sense both of a gathering storm—by the close of the last journal in this volume, the famous “attack on Christendom” is less than three years away—and a certain hesitancy: What needs reforming, Kierkegaard insists, is not “the doctrine” or “the Church,” but “existences,” i.e., lives.