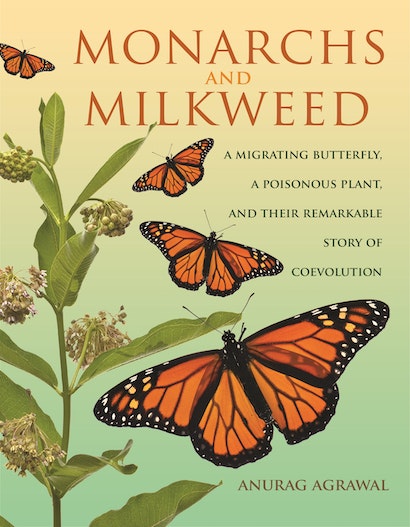 Monarch butterflies are one of nature’s most recognizable creatures, known for their bright colors and epic annual migration from the United States and Canada to Mexico. Yet there is much more to the monarch than its distinctive presence and mythic journeying. In Monarchs and Milkweed, Anurag Agrawal presents a vivid investigation into how the monarch butterfly has evolved closely alongside the milkweed—a toxic plant named for the sticky white substance emitted when its leaves are damaged—and how this inextricable and intimate relationship has been like an arms race over the millennia, a battle of exploitation and defense between two fascinating species.

The monarch life cycle begins each spring when it deposits eggs on milkweed leaves. But this dependency of monarchs on milkweeds as food is not reciprocated, and milkweeds do all they can to poison or thwart the young monarchs. Agrawal delves into major scientific discoveries, including his own pioneering research, and traces how plant poisons have not only shaped monarch-milkweed interactions but have also been culturally important for centuries. Agrawal presents current ideas regarding the recent decline in monarch populations, including habitat destruction, increased winter storms, and lack of milkweed—the last one a theory that the author rejects. He evaluates the current sustainability of monarchs and reveals a novel explanation for their plummeting numbers.

Lavishly illustrated with more than eighty color photos and images, Monarchs and Milkweed takes readers on an unforgettable exploration of one of nature’s most important and sophisticated evolutionary relationships. 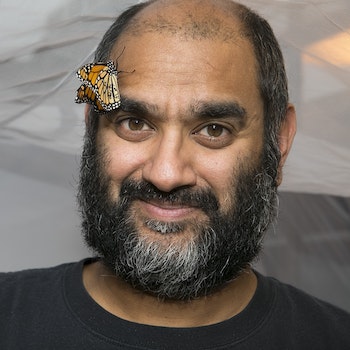 "A lively, highly informative introduction to significant research in ecology that highlights the importance of conserving our natural habitats."—Kirkus

"This comprehensive and colorful illustrated study of monarch biology and behavior . . . offers another reason to admire the versatile insect: its long and successful symbiotic relationship with the otherwise toxic milkweed plant. . . . Agrawal's book will appeal not only to butterfly enthusiasts but also to the environmentally aware and all readers who appreciate solidly written and accessible popular science."—Booklist

"Epic is the only word to describe the annual journey of monarch butterflies. . . . Agrawal's splendid book is no less epic, taking us from heart toxins and sodium pumps to climate change and illegal logging. This is important science about an iconic and sadly declining insect, made readable by enthusiastic, personal prose."—Richard Jones, BBC Wildlife Magazine

"[Anurag Agrawal's] book is a minutely detailed exploration of just about everything about [monarchs]: sex lives, dining habits, internal flight guidance and, in particular, their coevolving-but-competitive relationship with milkweed."—Nancy Szokan, Washington Post

"Agrawal's marvelous book is one of the most in—depth explorations of the process of co—evolution I have ever read. . . . What sets this book apart is two things: the superior quality of the writing and the range of scientific depth to which each topic is explored. Agrawal could give the recent grandmaster of science writing, Stephen Jay Gould, a proverbial run, and as a consequence, the book is highly accessible to everyone in a wide age range and from a variety of educational backgrounds."—NSTA Recommends

"Science strongly indicates all living things evolved from a common ancestor to form the complex biosphere we inhabit on earth. Agrawal deftly plucks one strand from this web of life, the monarch butterfly, and elucidates reverberations that resonate from the dawn of time to the present and back and forth among life forms along the way. . . . Monarch life history on a toxic host laden with cardenolides and largely dependent on migrating vast distances to tiny overwintering sites and back again is the backbone of the book. . . . Color illustrations are abundantly informative, the main text font is eminently legible with a useful index, and the well bound paper stock bodes well for the physical longevity of the book."—Science Books & Film

"Ecological and evolutionary processes are beautifully described in this endearing book. . . . [It] is recommended to all science libraries in general and to the lepidopterists in particular."—R. K. Varshney, Bionotes

"Agrawal addresses a wide range of related topics—from the monarch's life cycle, to historic research, other invertebrates that are part of the milkweed complex, taste aversion, and even mimicry of the monarch’s coloration by other butterflies. The author’s accessible writing style will appeal to both the scientist and lay person. Helpful illustrations and photographs assist in clarifying the narrative."—The American Gardener

"Public and scientific interest in monarch butterflies (Danaus plexippus) seems to be at an all-time high, and this volume stands out nicely in a crowded field of general-interest science books about the beloved insect."—Matthew L. Forister, Quarterly Review of Biology

"Monarch butterflies are a familiar sight, but they have a hidden life of astonishing, beautiful complexity. In Monarchs and Milkweed, Anurag Agrawal offers an unprecedented tour of the lives of these insects, based on cutting-edge research into their evolution."—Carl Zimmer, coauthor of Evolution: Making Sense of Life

"This is a gorgeously written and wonderfully illustrated synthesis of our rich knowledge of the evolutionary battle between the monarch butterfly and the common milkweed. It is also a fascinating account of the cast of biologists—including such pioneers as Lincoln Brower, Miriam Rothschild, and Fred and Nora Urquhart—who have probed the deep mysteries posed by this amazingly mobile insect and its famously poisonous host."—Thomas D. Seeley, author of Honeybee Democracy

"With a narrative both interesting and well-told, Monarchs and Milkweed will appeal to a wide audience. From biochemical to evolutionary perspectives, this book brings the arms race of milkweeds and monarchs to new light, and shows how and why biology is fun. I recommend it highly."—Bernd Heinrich, author of One Wild Bird at a Time

"When I studied monarchs in the 1950s, I never imagined they would become one of the most important experimental animals in biology. Jane Van Zandt Brower's pathbreaking work on their role in mimicry started to change my view, and helped Peter Raven and me to develop the field of coevolution. Now Anurag Agrawal, a world-class scientist, tells the monarch-milkweed coevolution story in a brilliant, readable book—one that underlines the vast improvement of our understanding of the living world during the last half-century."—Paul R. Ehrlich, coauthor of The Annihilation of Nature

"It's impossible to imagine the world without monarch butterflies. But they face mounting challenges. This clear, fact-packed book looks at this astonishing and amazing insect and will make you want to cheer, ‘Long live the monarch!'"—Carl Safina, author of Beyond Words: What Animals Think and Feel

"This marvelous book looks at how plants and plant-feeding insects have coevolved and how scientists over the past century have painstakingly identified the processes that shape webs of interacting species. Beautifully describing ecological and evolutionary processes, this wonderfully enjoyable book is to be savored for the remarkable ways in which science unravels how life on earth has become so diverse."—John N. Thompson, University of California, Santa Cruz

"Engagingly written, Monarchs and Milkweed is the best book on monarch biology that I have ever read."—Stephen B. Malcolm, Western Michigan University