The first comprehensive history of the Turkish economy 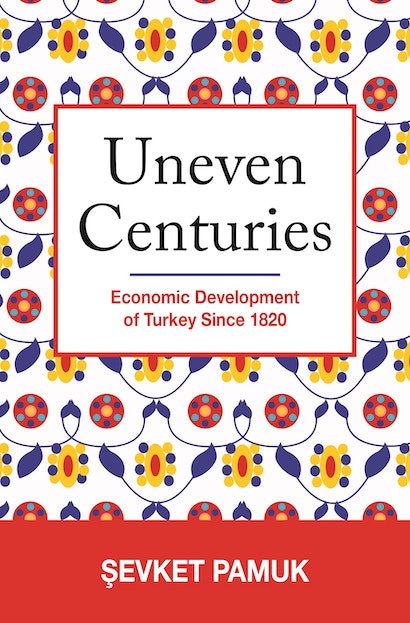 The population and economy of the area within the present-day borders of Turkey has consistently been among the largest in the developing world, yet there has been no authoritative economic history of Turkey until now. In Uneven Centuries, Şevket Pamuk examines the economic growth and human development of Turkey over the past two hundred years.

Taking a comparative global perspective, Pamuk investigates Turkey’s economic history through four periods: the open economy during the nineteenth-century Ottoman era, the transition from empire to nation-state that spanned the two world wars and the Great Depression, the continued protectionism and import-substituting industrialization after World War II, and the neoliberal policies and the opening of the economy after 1980. Making use of indices of GDP per capita, trade, wages, health, and education, Pamuk argues that Turkey’s long-term economic trends cannot be explained only by immediate causes such as economic policies, rates of investment, productivity growth, and structural change.

Uneven Centuries offers a deeper analysis of the essential forces underlying Turkey’s development—its institutions and their evolution—to make better sense of the country’s unique history and to provide important insights into the patterns of growth in developing countries during the past two centuries.

"Described as ‘the first comprehensive history of the Turkish economy’, Uneven Centuries has been widely acclaimed for its ‘rich and original’ broad approach"—Cornucopia

"Sevket Pamuk’s engaging book frames the evolution of the Turkish economy over two centuries, showing that historical developments under the Ottomans constitute an essential key to comprehending the path taken by modern Turkey."—Giampaolo Conte, Journal of European Economic History

"[A] powerful analysis of how Turkey got into its present position."—Paul Rivlin, Bustan: The Middle East Book Review

“The story of the economy and institutions of the Turkish Republic is often told as if there was a sharp rupture with the Ottoman era. The reality is much more complex, with many lines of continuity and the long shadow of the Ottoman past shaping many aspects of Turkish economic and political development. There is no better source that exposits these continuities and explains in what ways Turkey has changed and in what ways it has remained trapped by its past than this erudite, well-researched book. A must-read for anybody interested in Turkish economic history and the general institutional and economic problems of the developing world.”—Daron Acemoglu, coauthor of Why Nations Fail

“From the late Ottoman period to the contemporary Republican era, Turkey’s economic fortunes have fluctuated widely. There is no one better to tell this rich story than Şevket Pamuk, the doyen of Turkish economic historians. Beyond providing a comprehensive statistical portrait of the last two centuries, Pamuk places Turkey’s experience in comparative perspective and links it to deeper institutional transformations. A major accomplishment, this book will be a standard reference for years to come.”—Dani Rodrik, author of Straight Talk on Trade

“In his groundbreaking economic history of Turkey, Şevket Pamuk analyzes the causes behind two centuries of uneven economic development—conflicting institutions that as they changed could simultaneously encourage growth but also hold it back.”—Philip T. Hoffman, author of Why Did Europe Conquer the World?

“Şevket Pamuk’s brilliant analysis helps move discussions of Turkey’s economic performance away from narrowly conceived short-term concerns and puts them in a historically informed, long-term, and comparative perspective. Pamuk breaks free from the ideological models that constrained the studies of economic development in Turkey and similar places for generations. To say that this book is seminal would be an understatement. With its extraordinarily rich and original information, brilliant insights, sophisticated analysis, and admirably clear prose, Uneven Centuries will set the standard for studying the economic history of the non-Western world for many years to come.”—Reşat Kasaba, author of A Moveable Empire