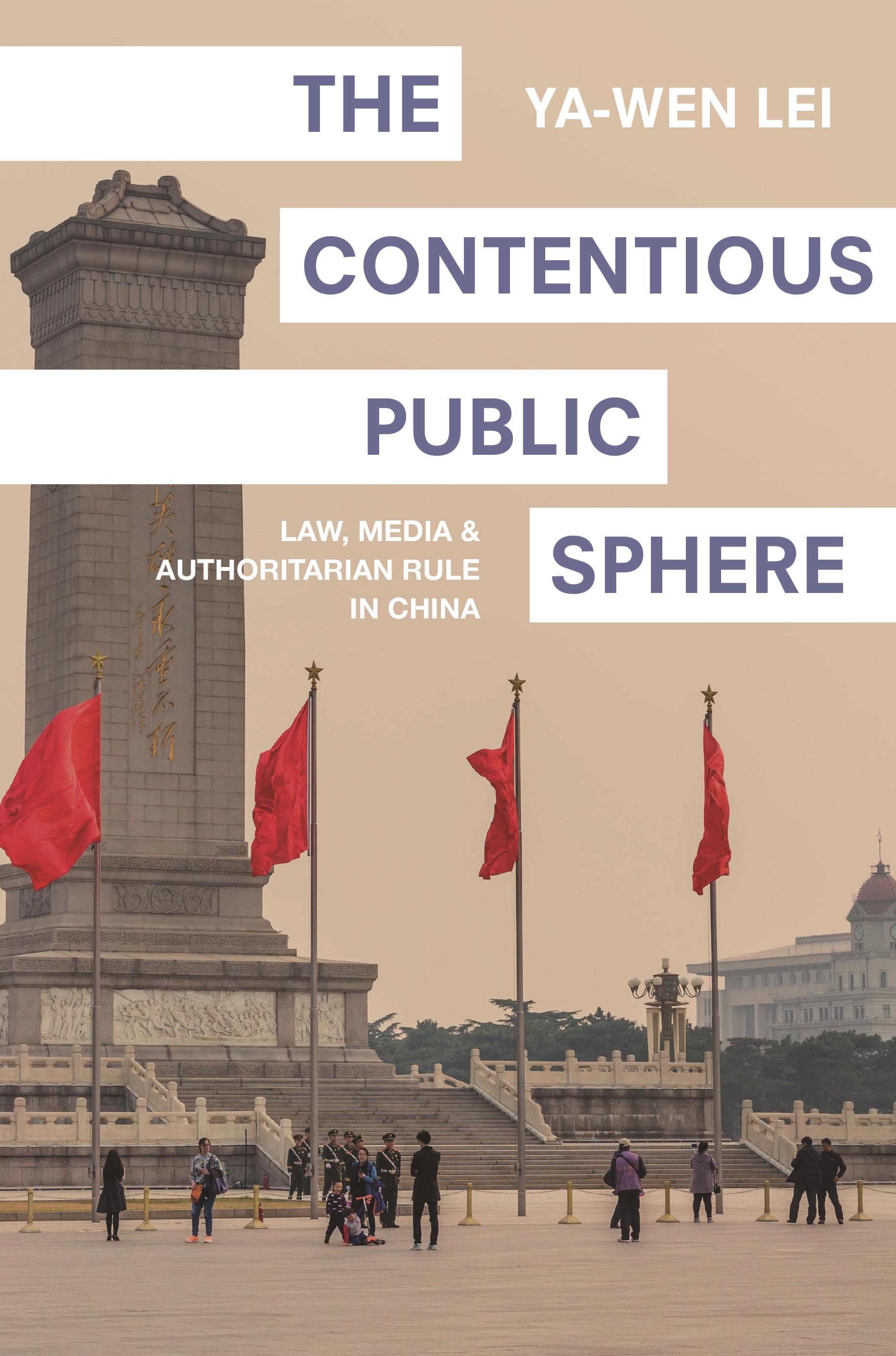 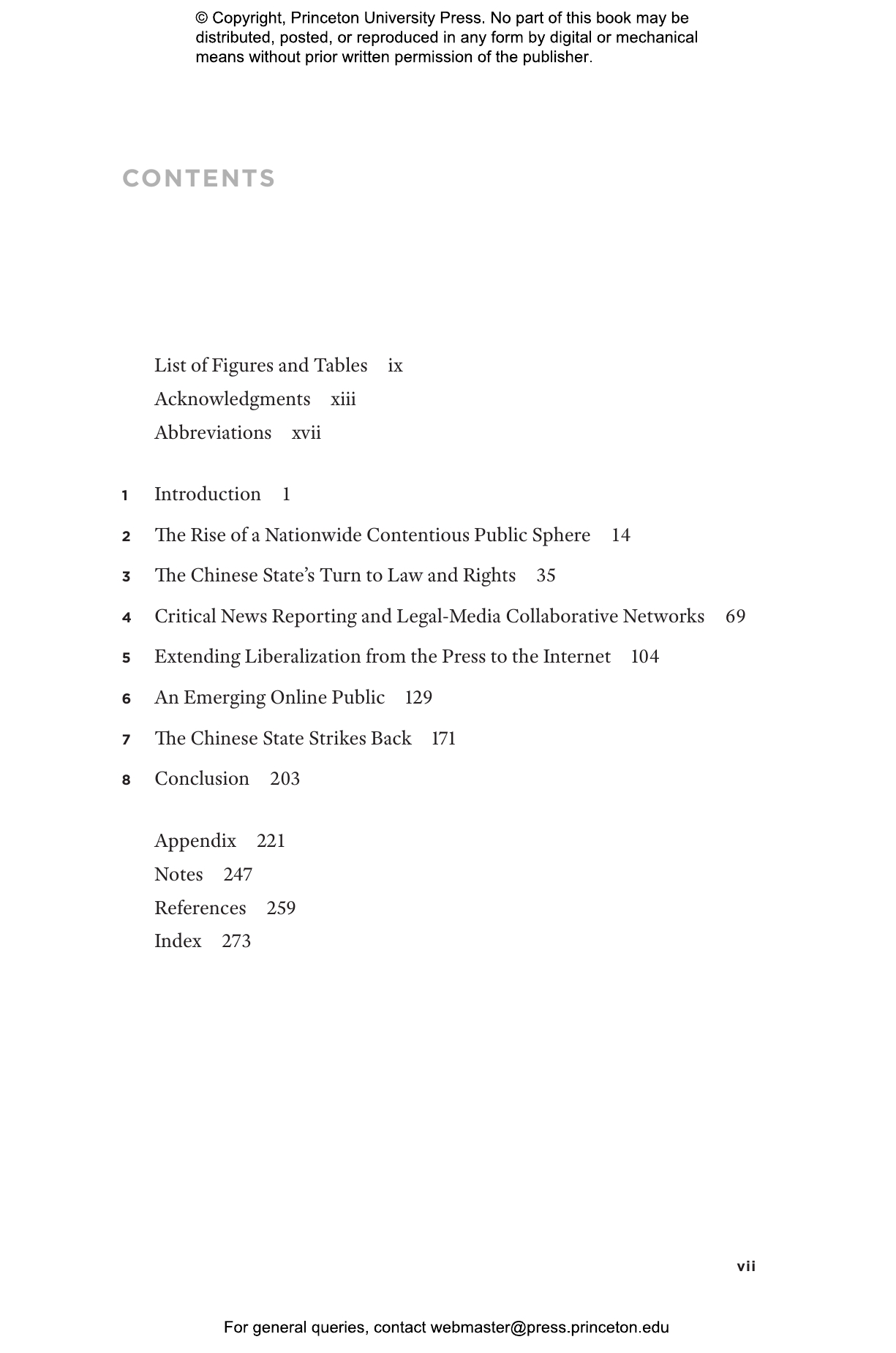 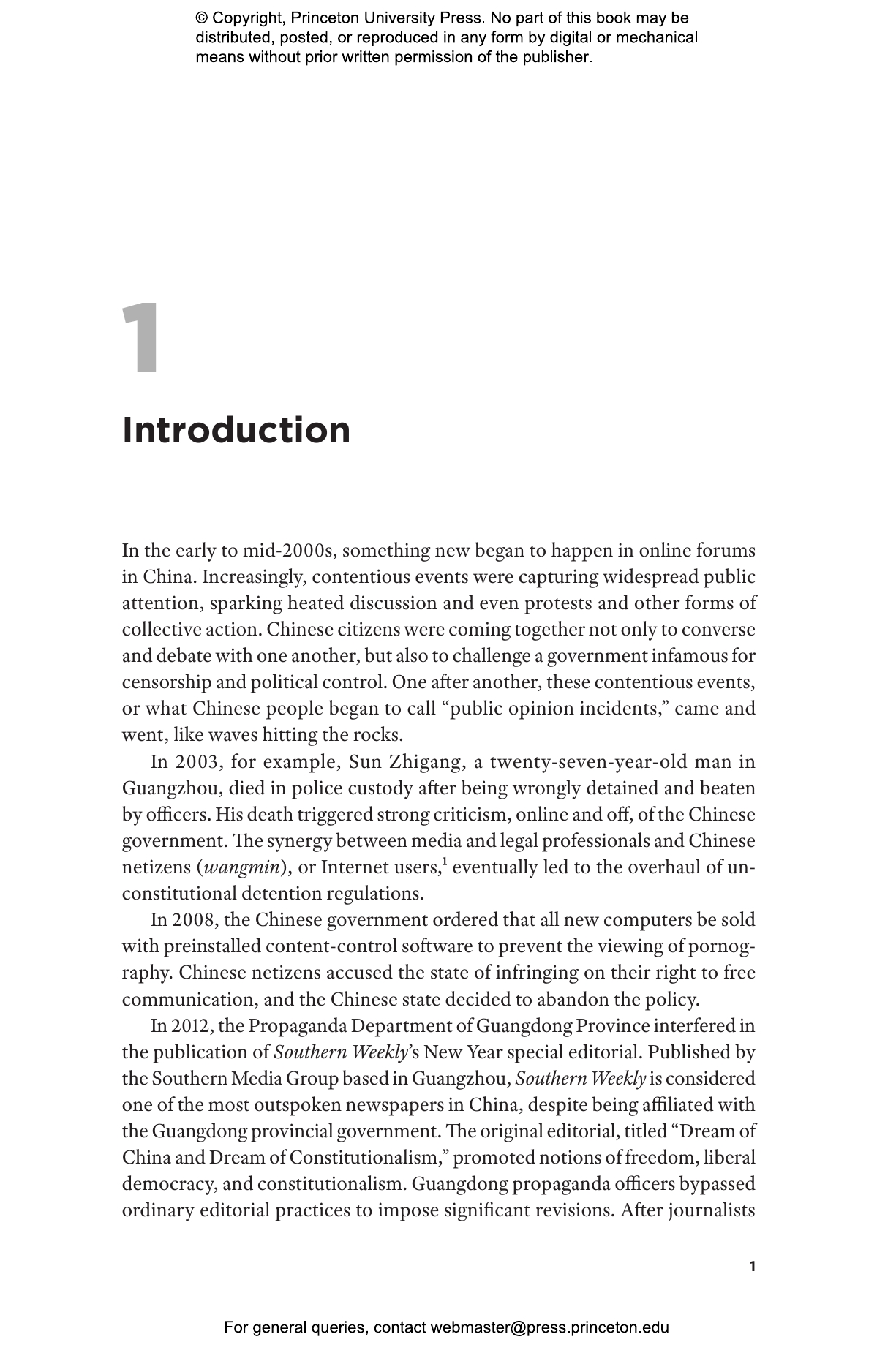 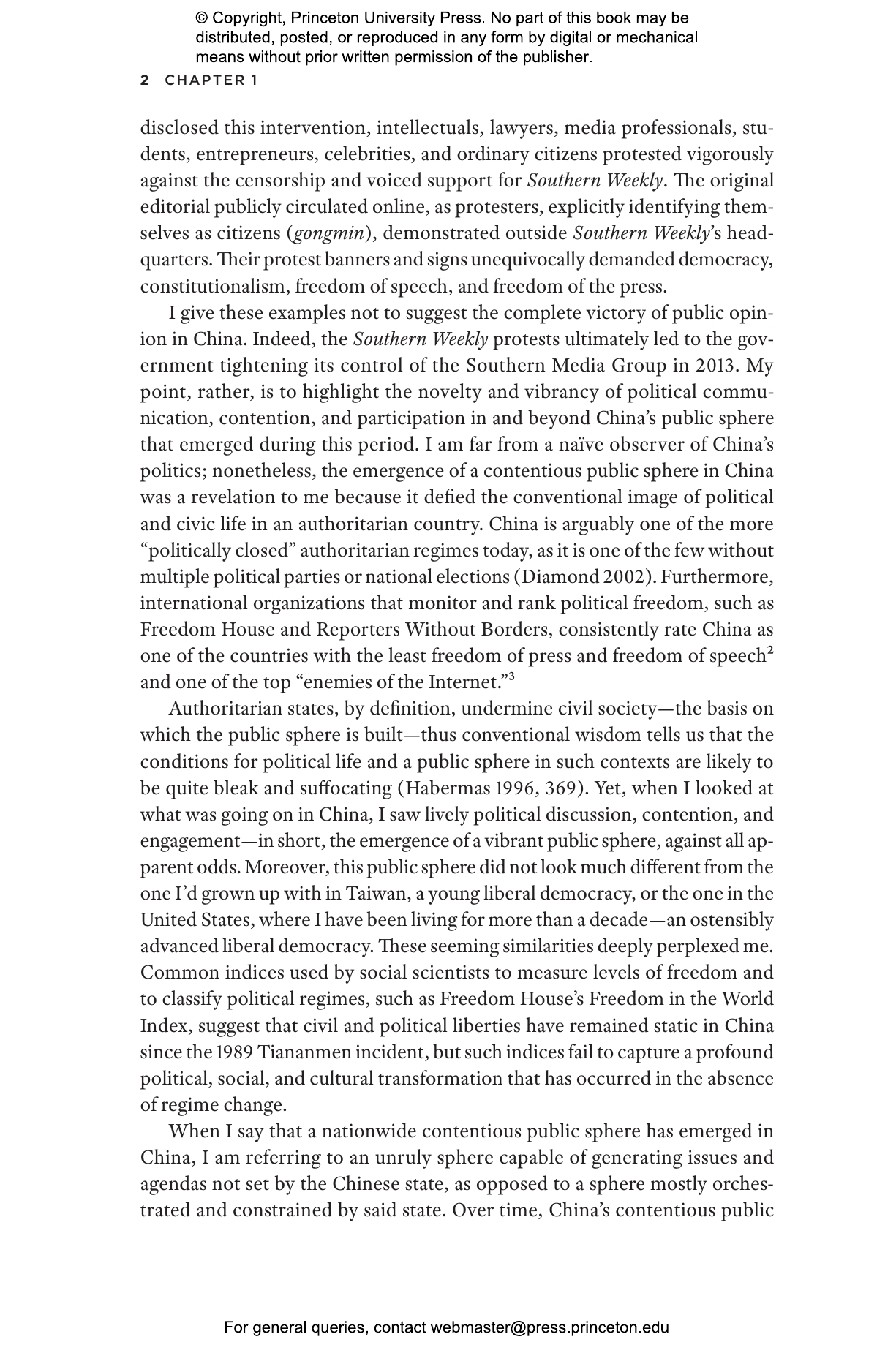 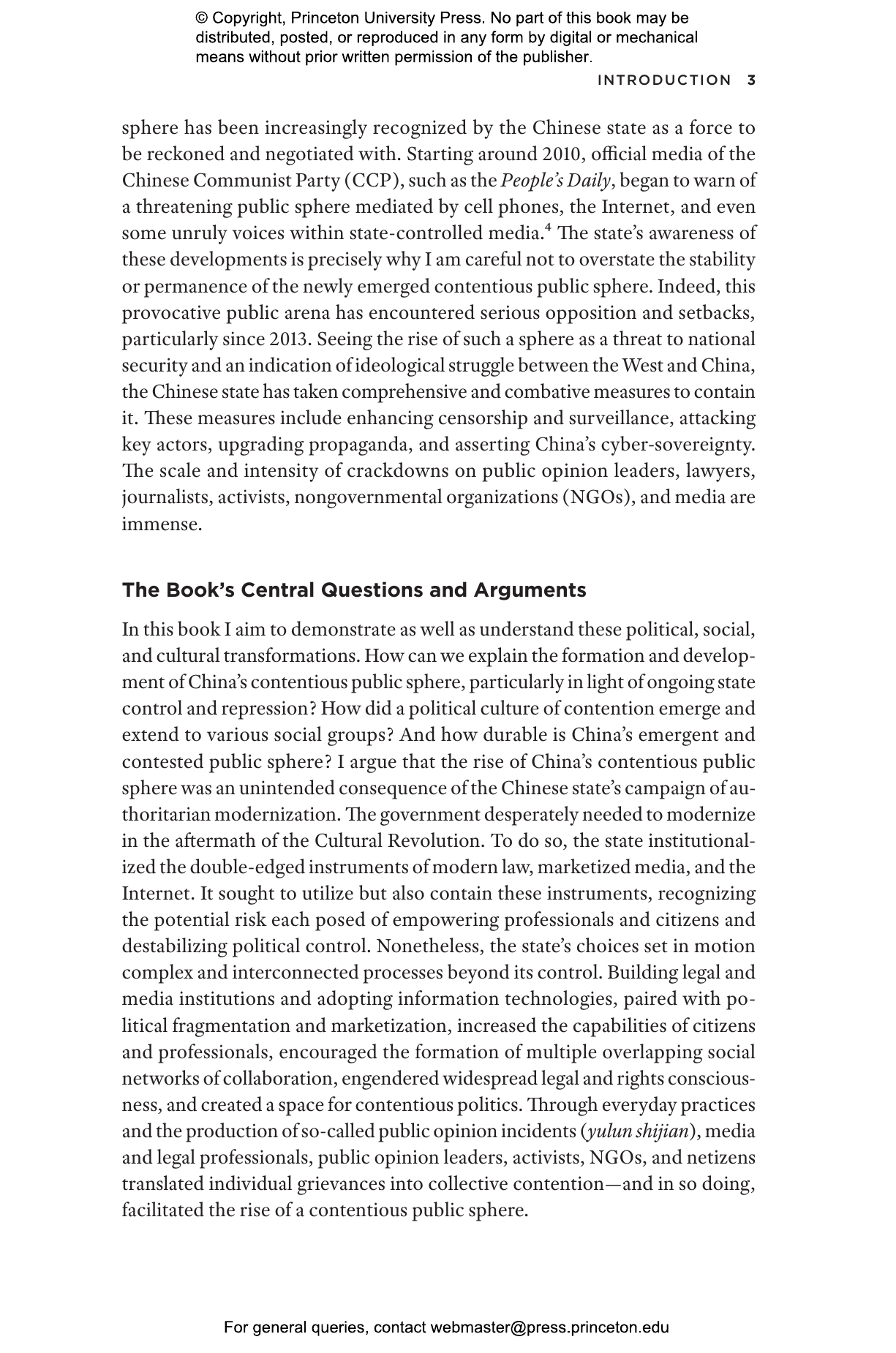 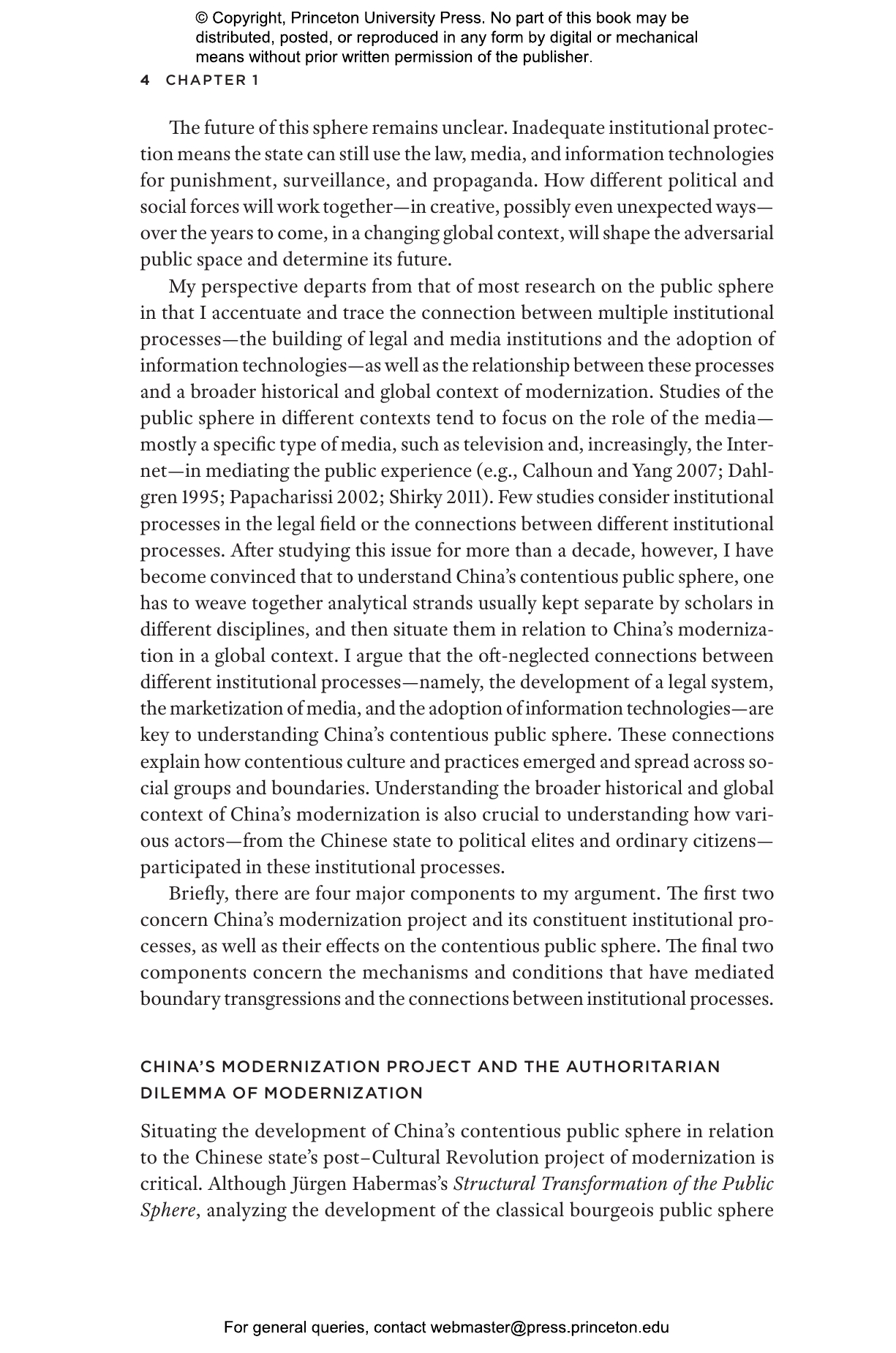 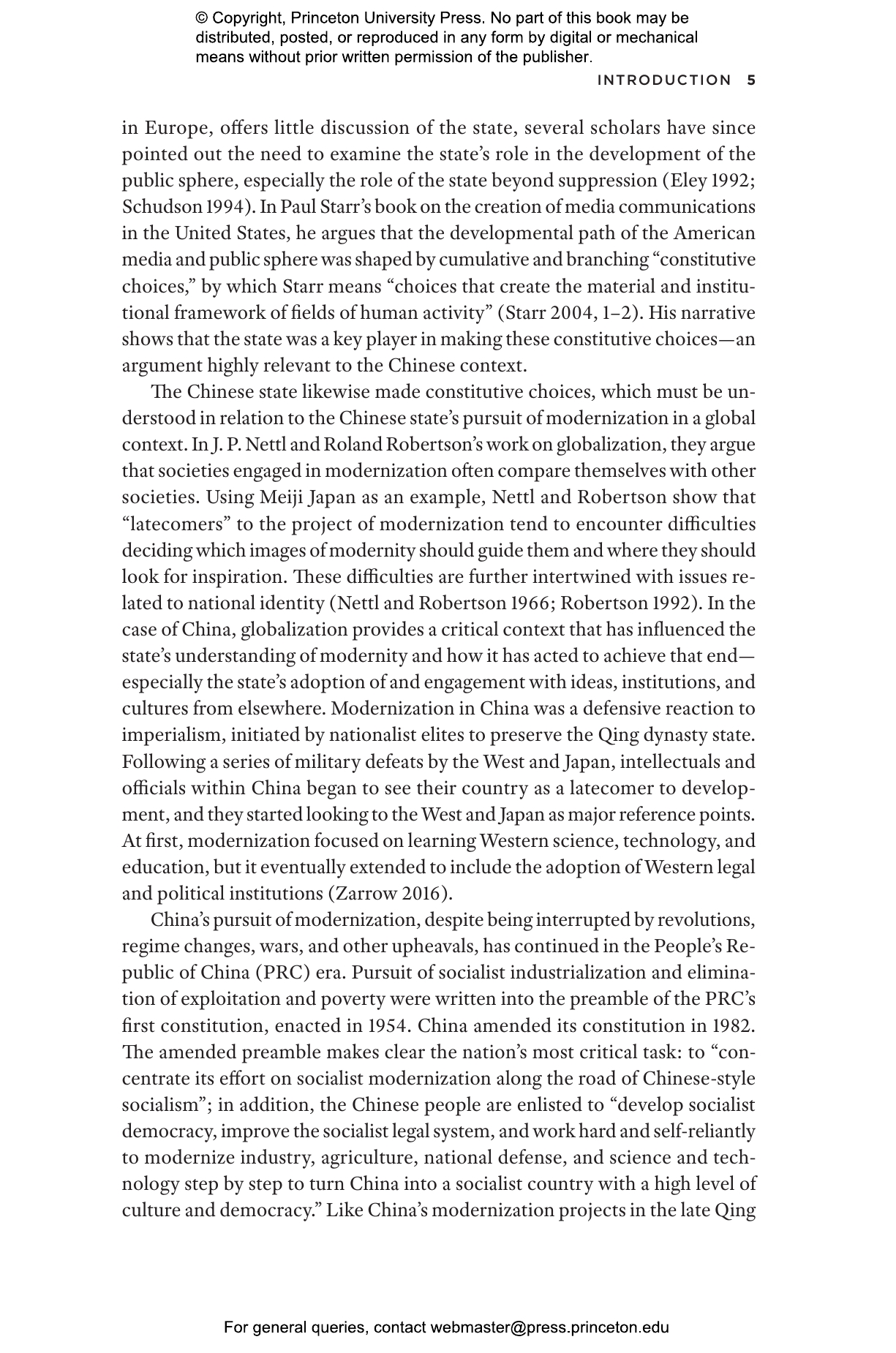 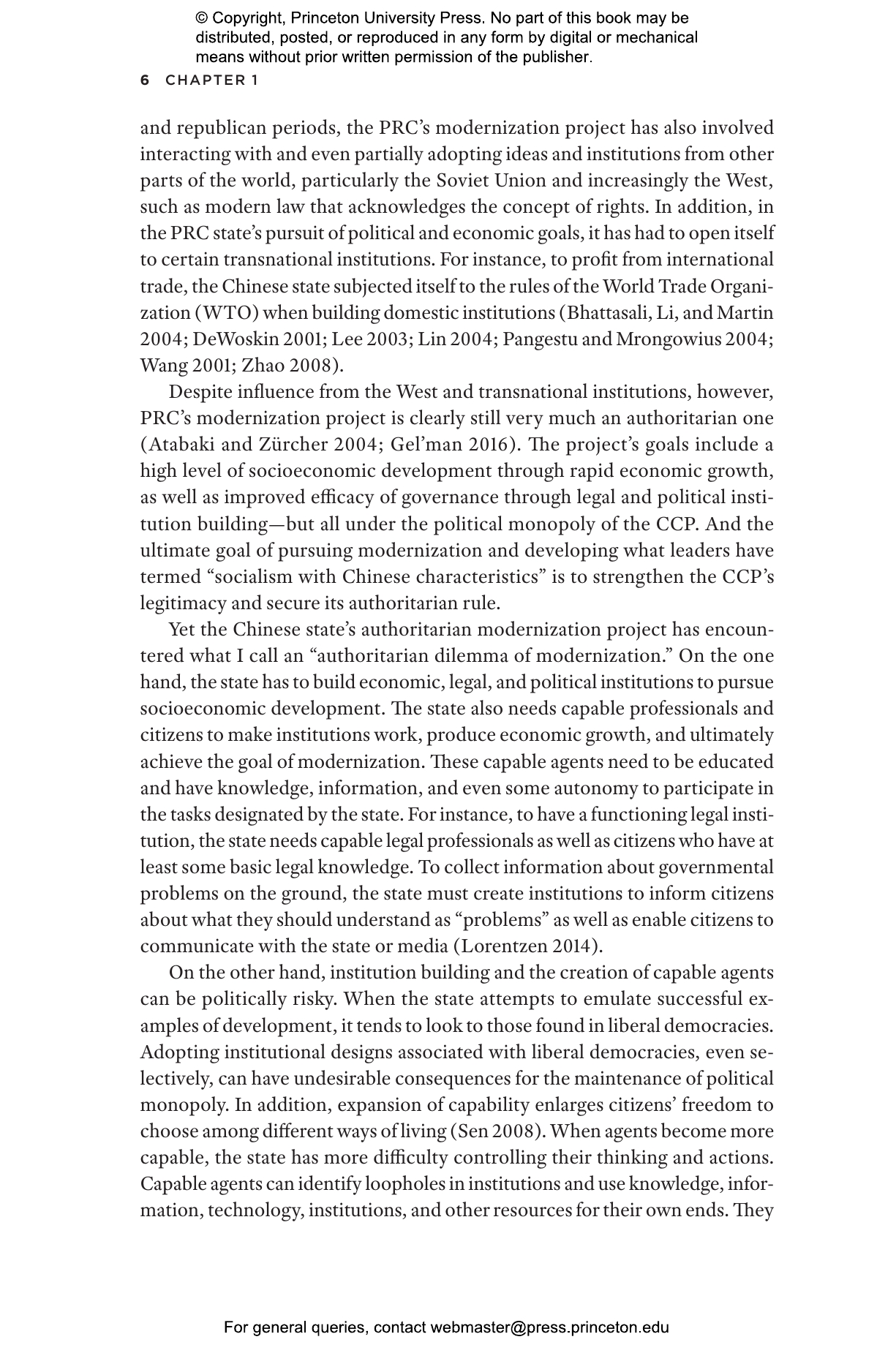 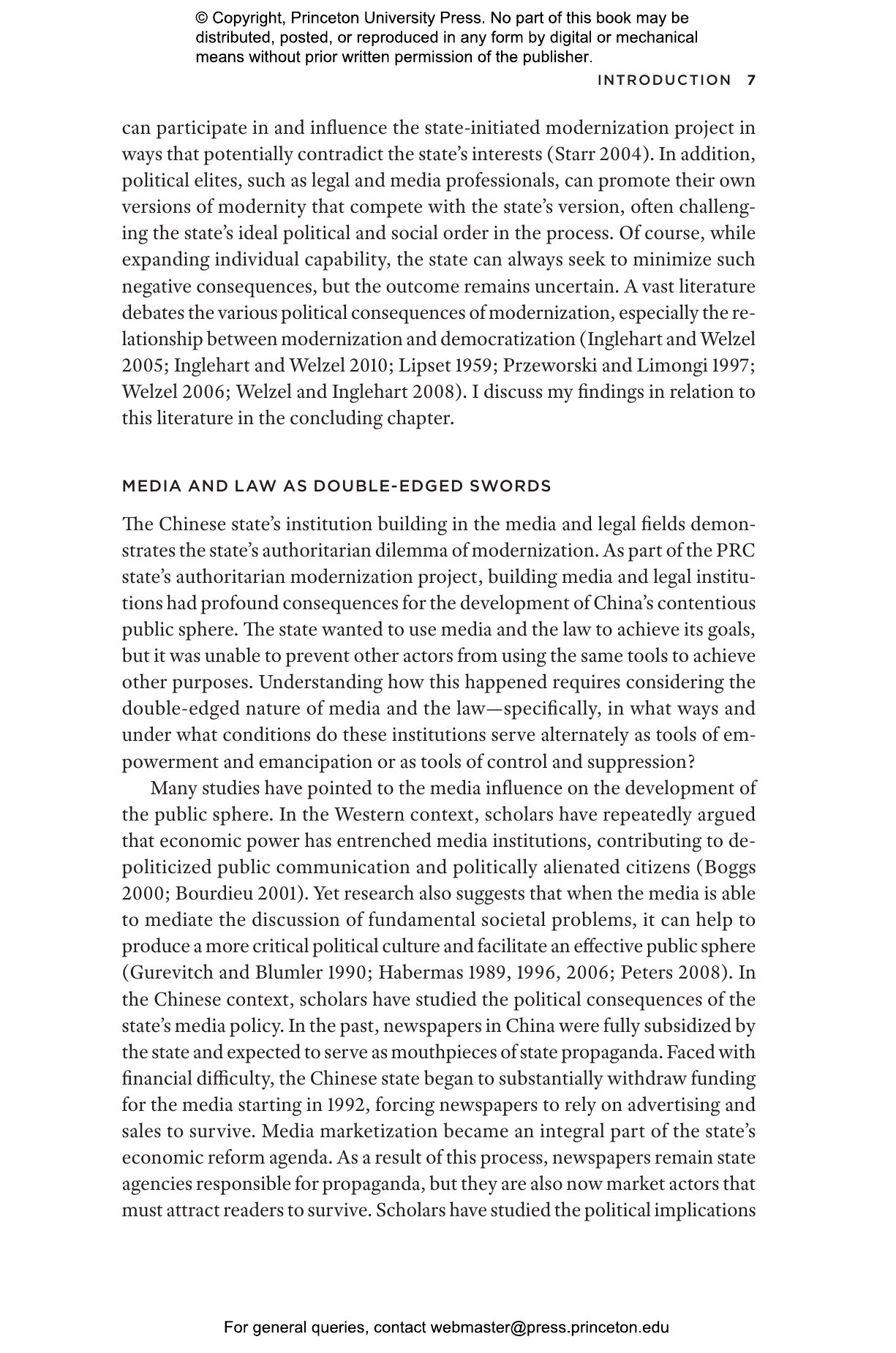 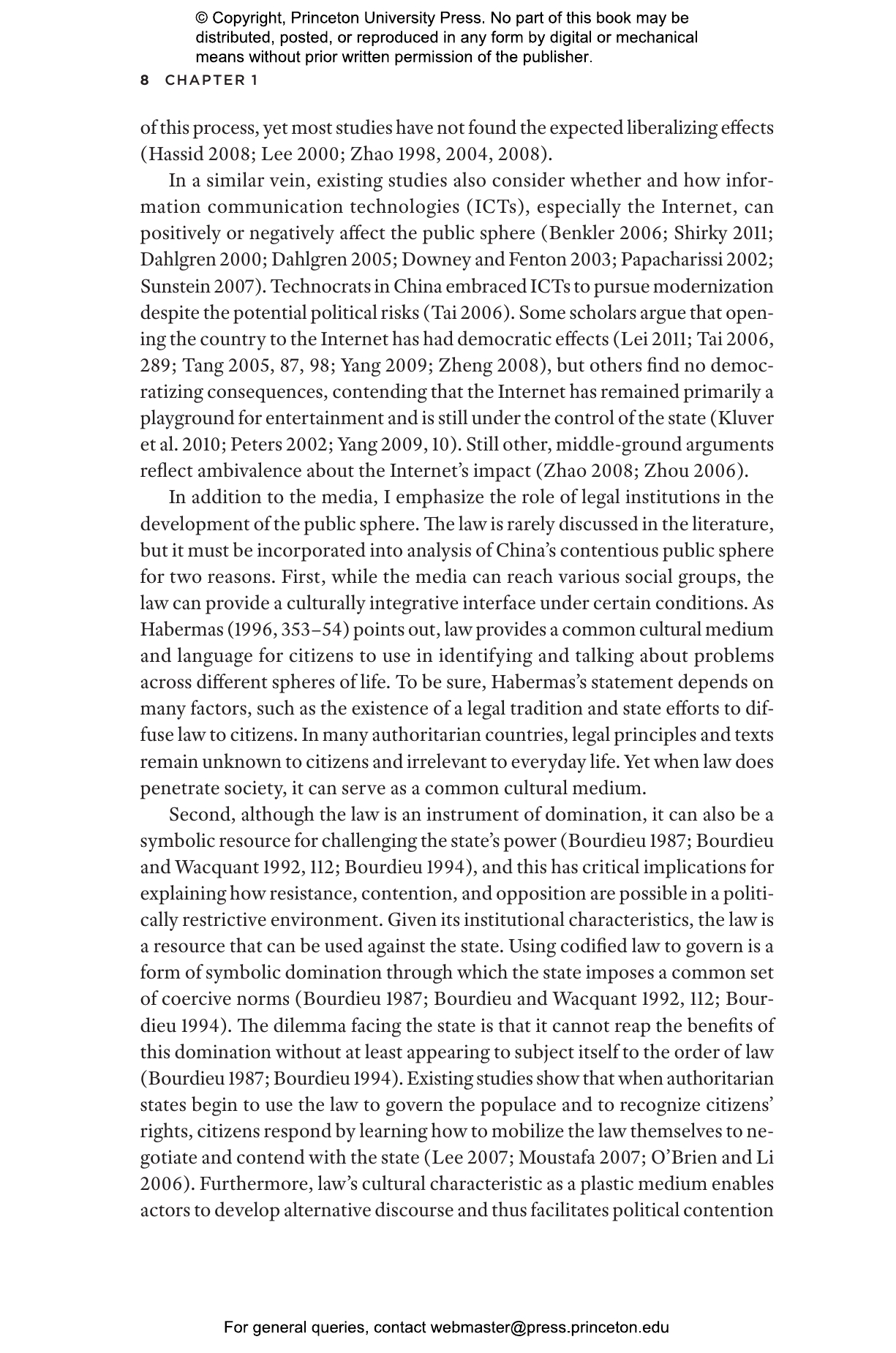 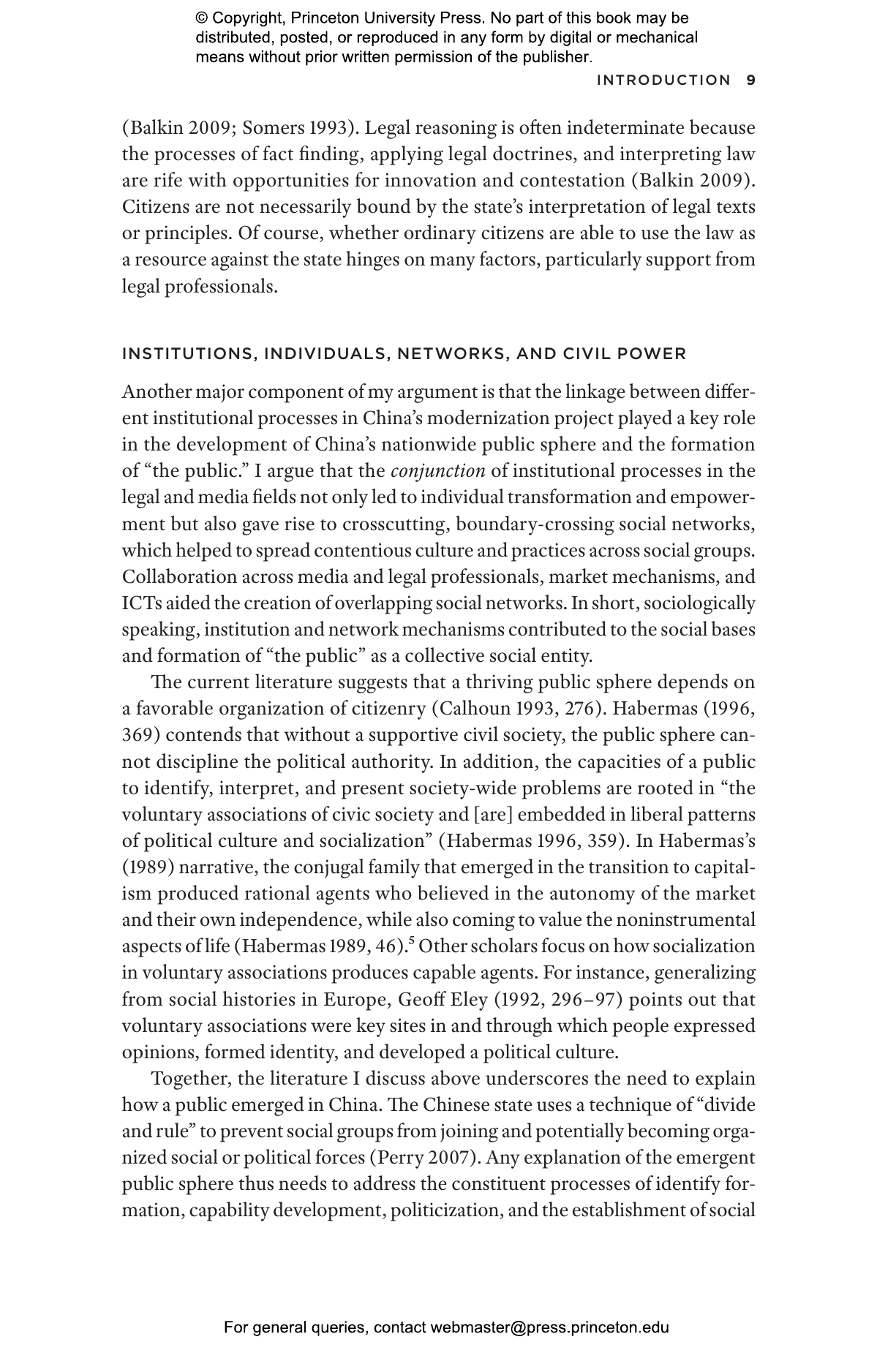 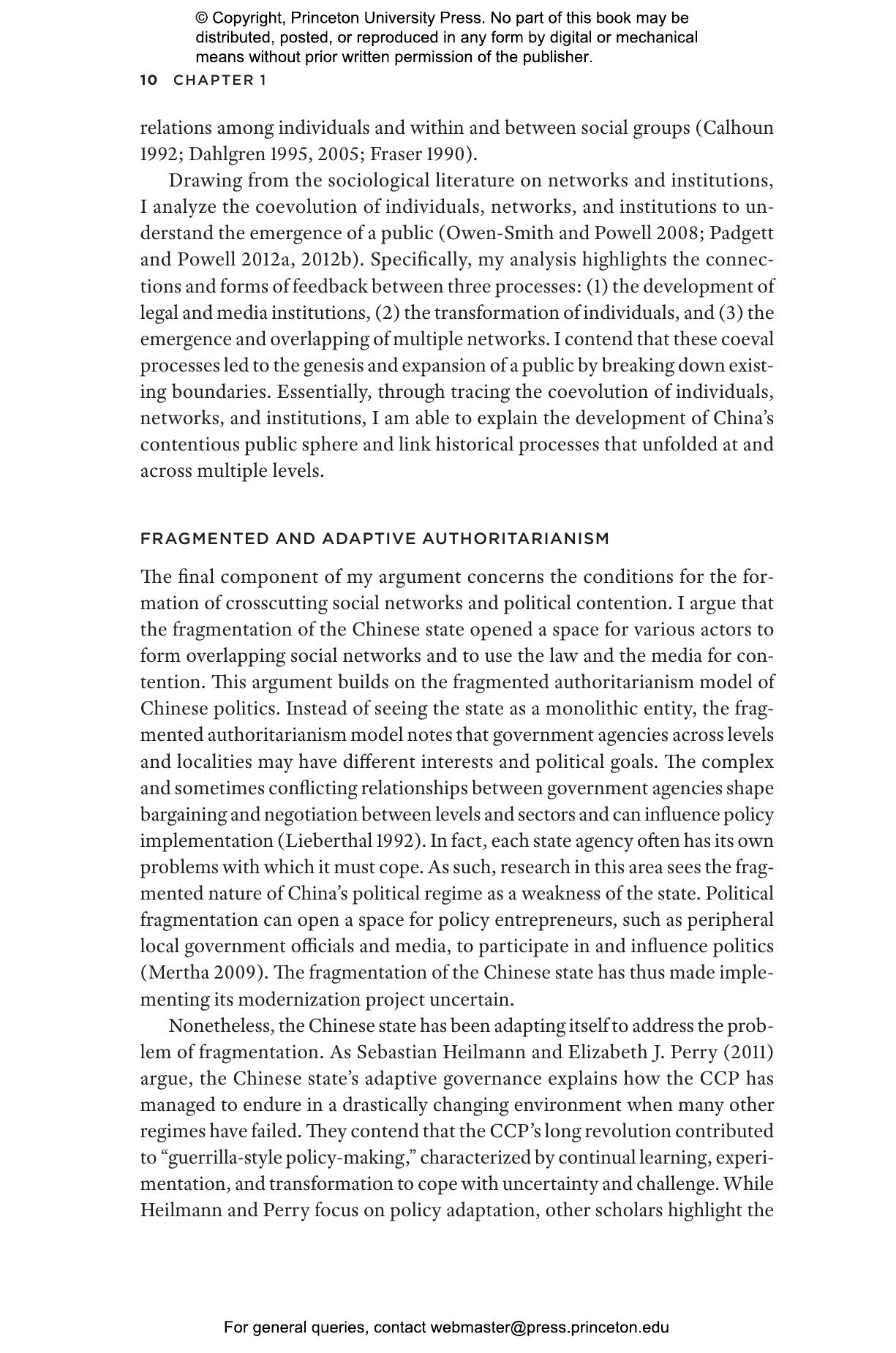 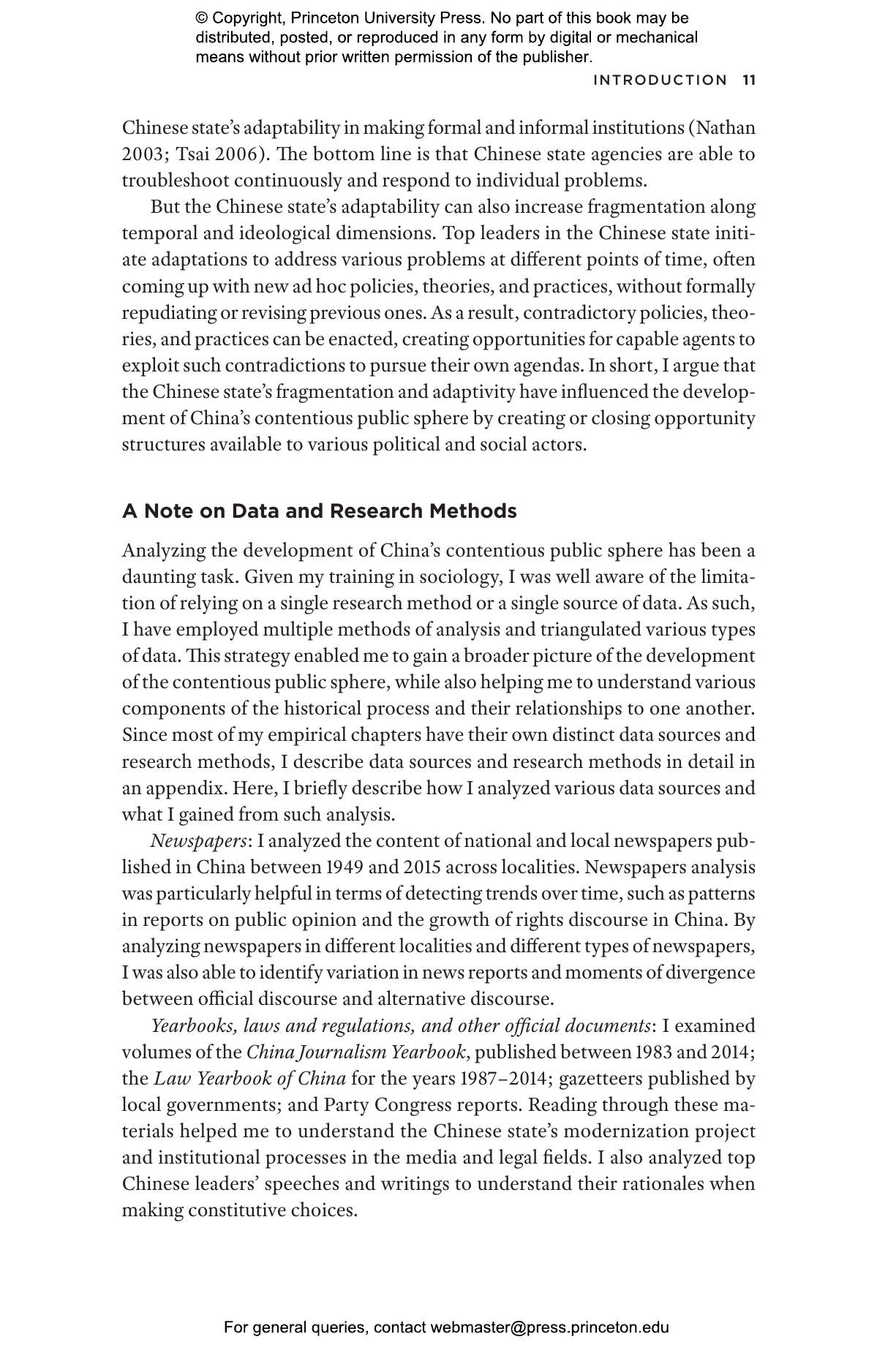 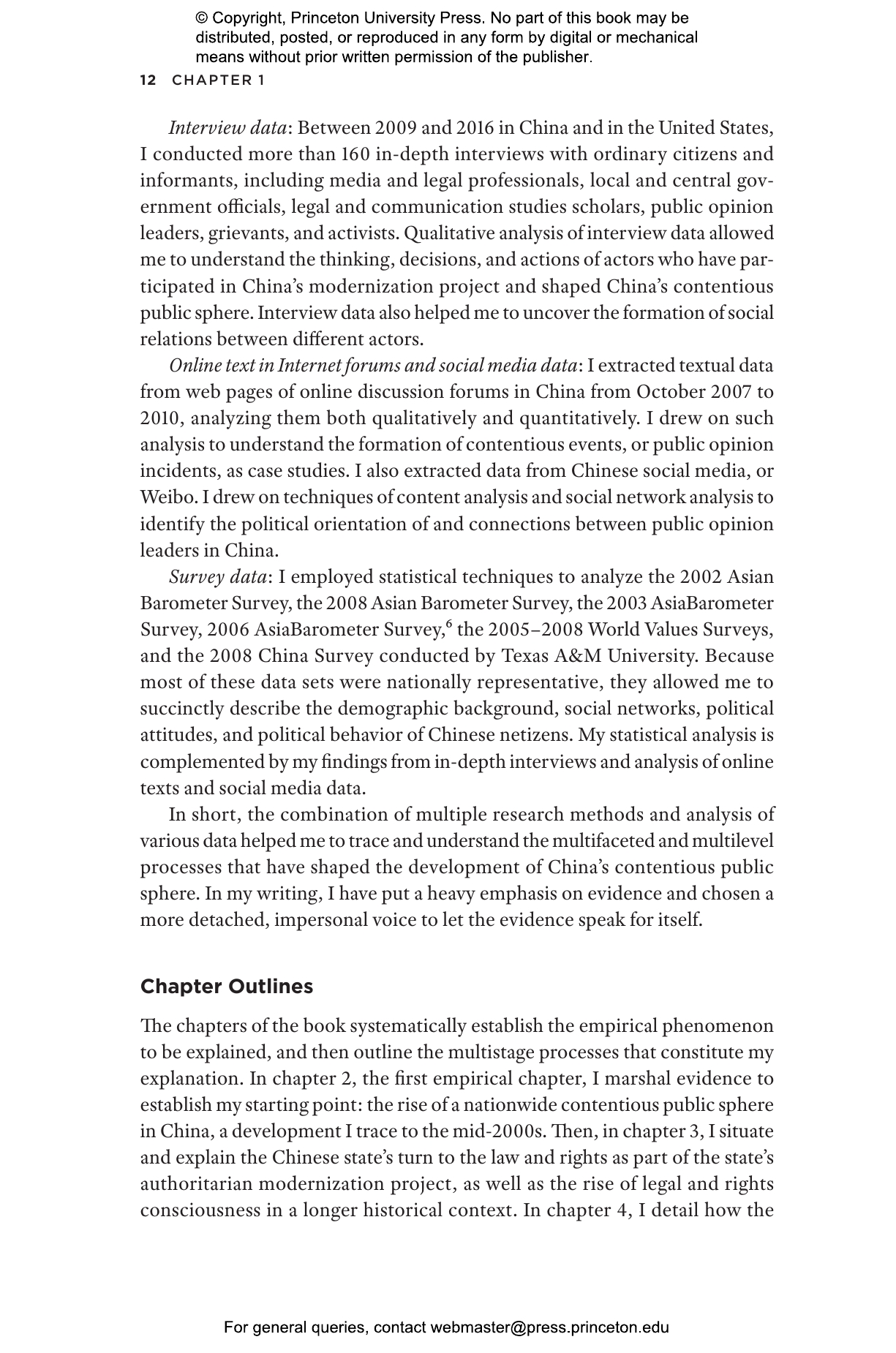 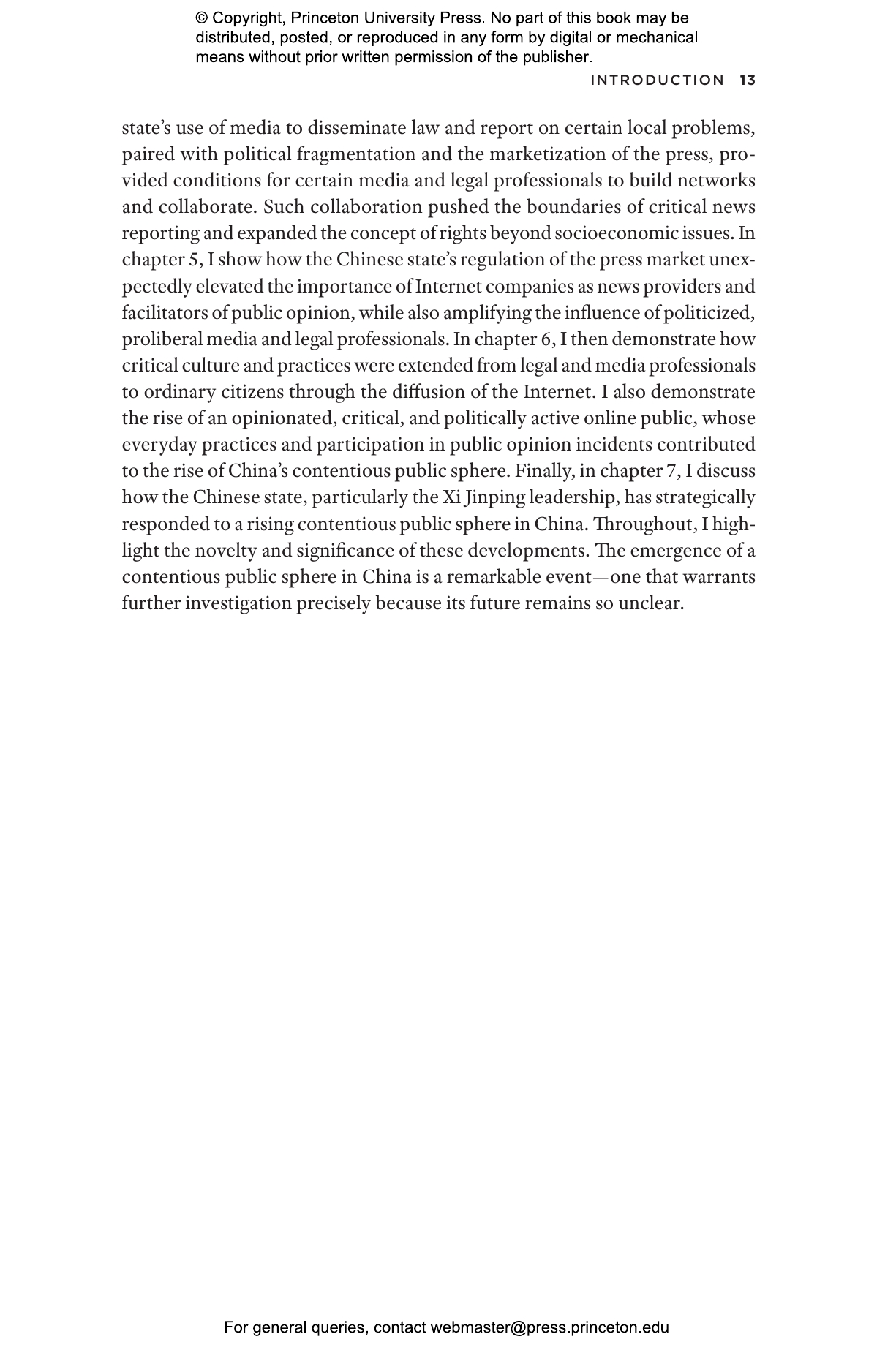 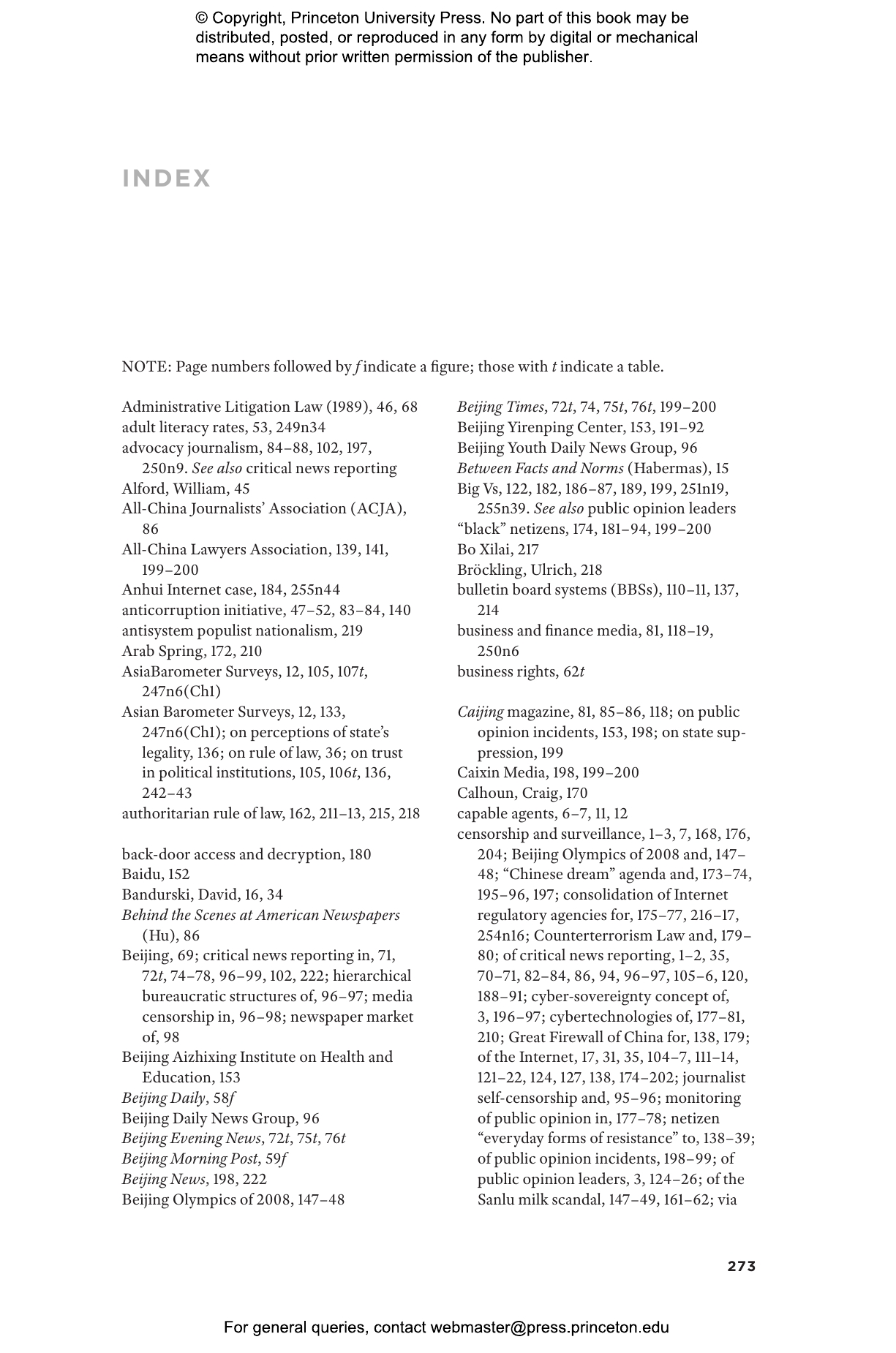 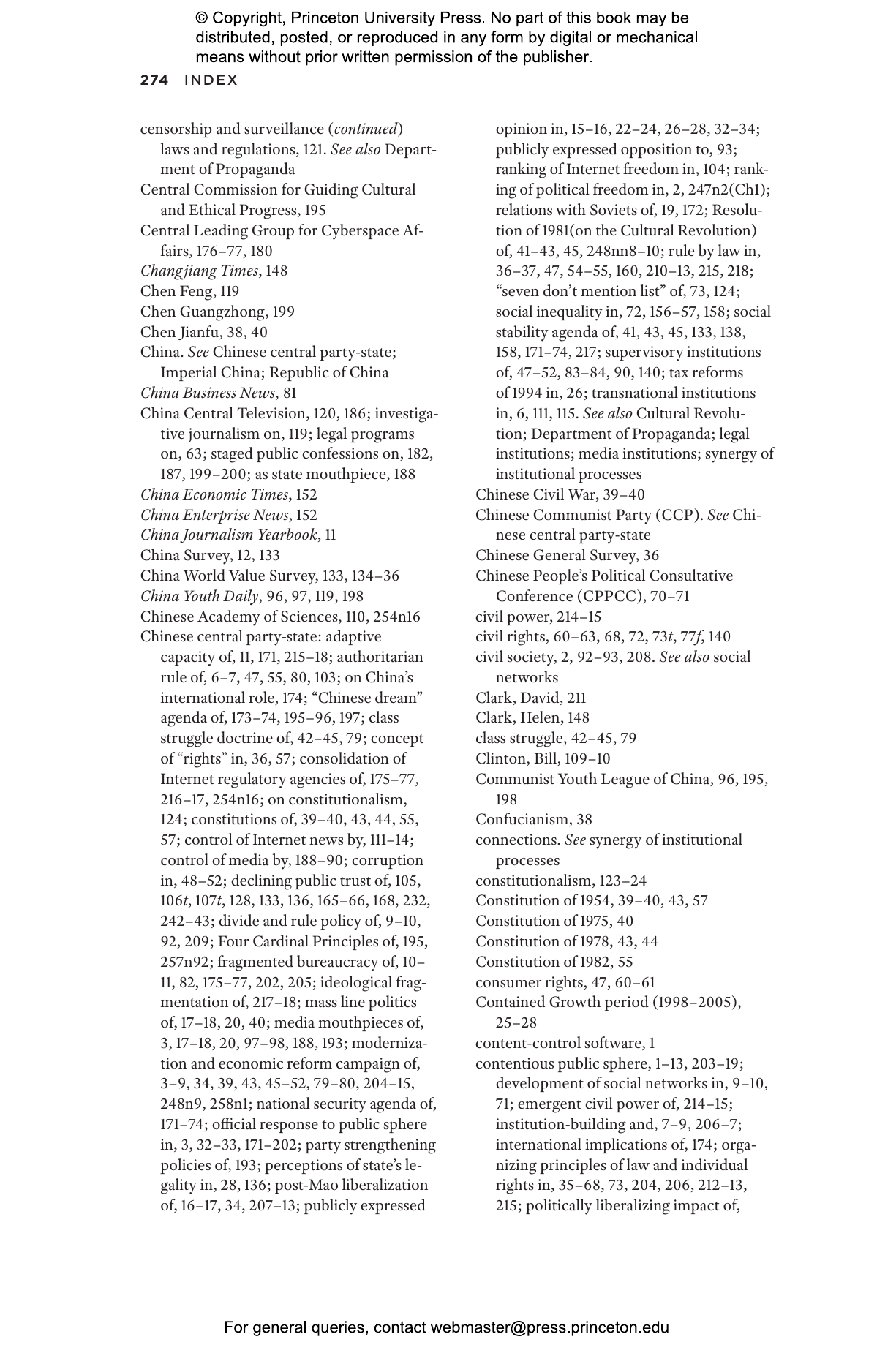 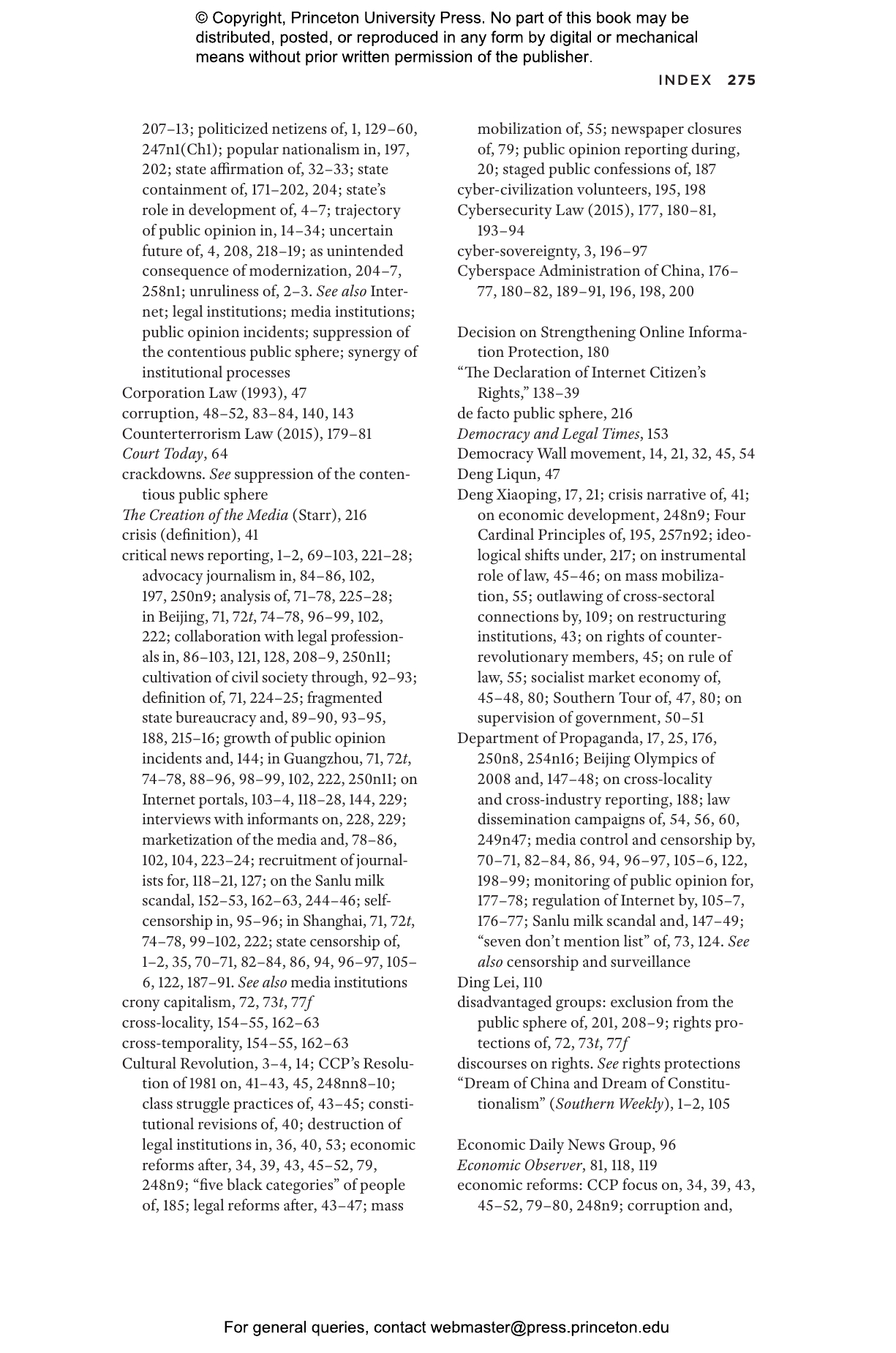 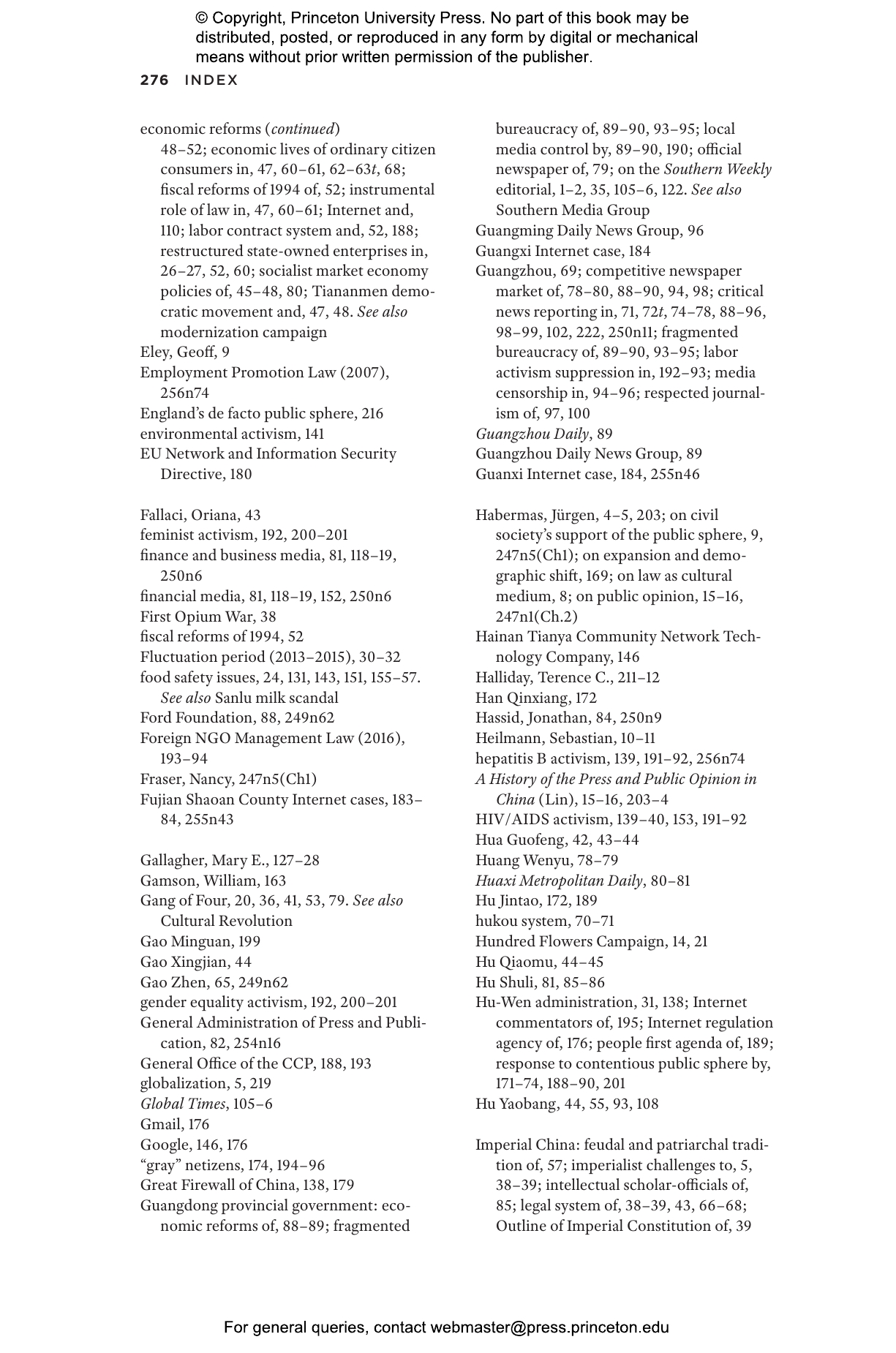 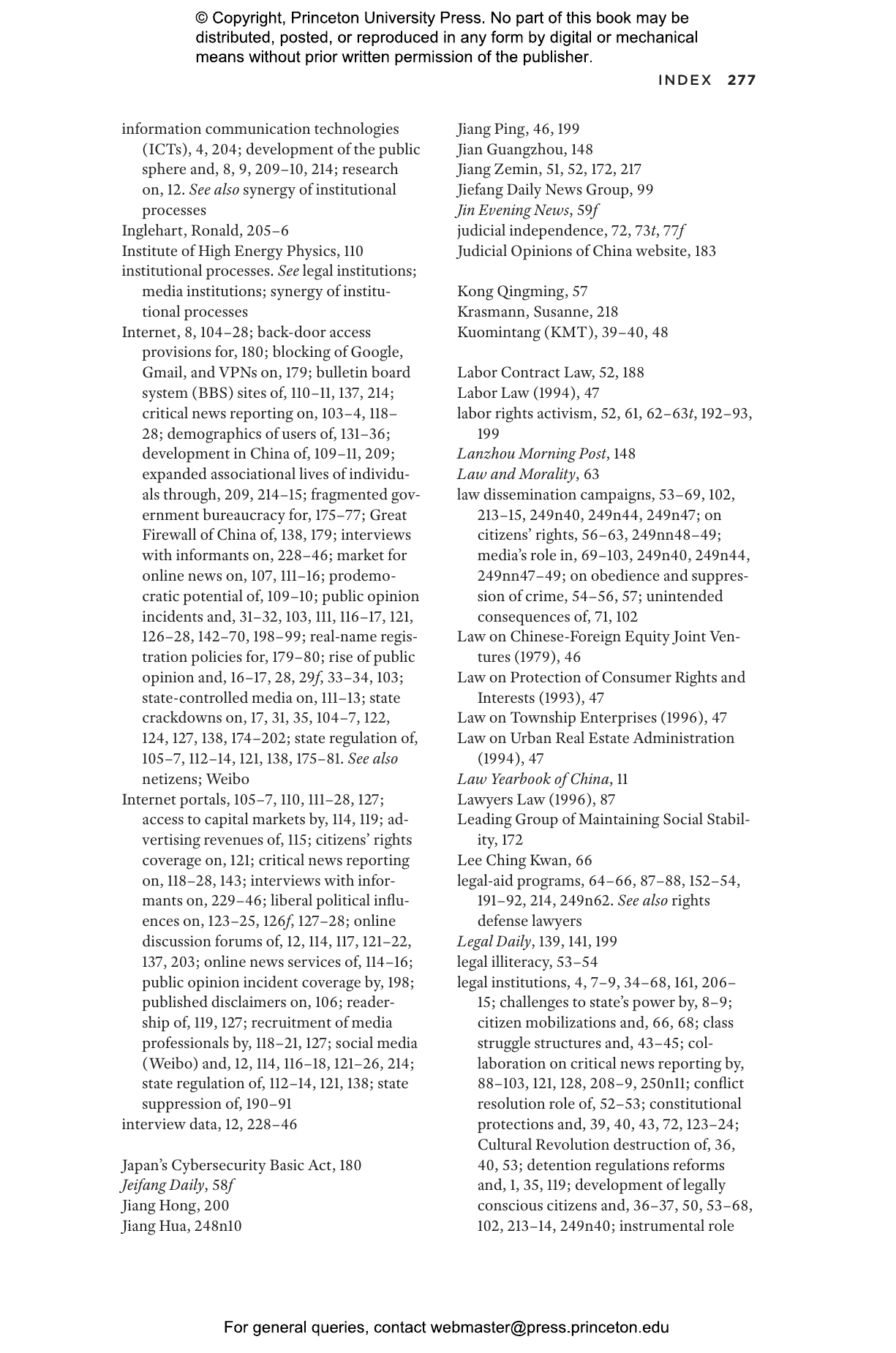 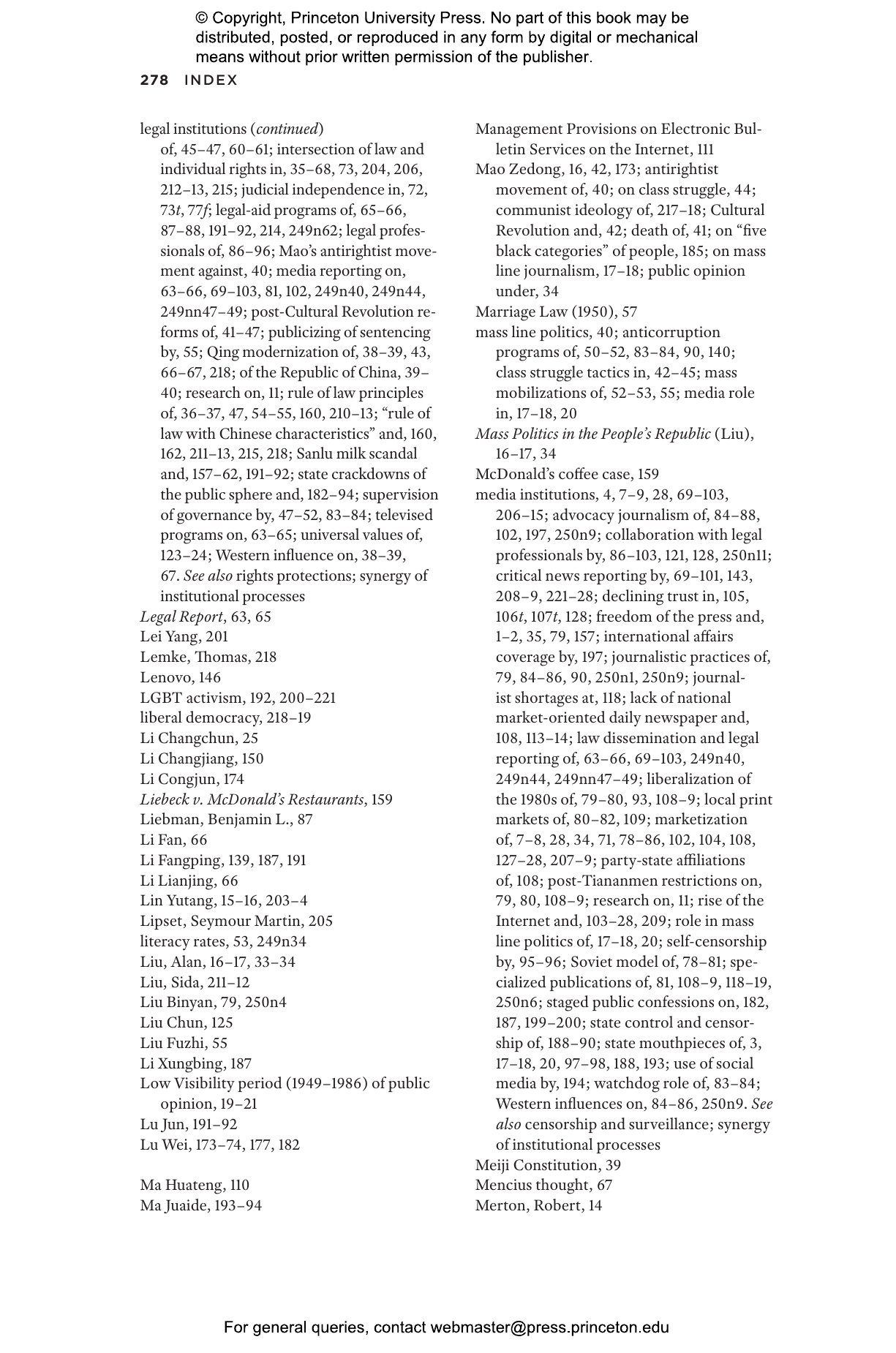 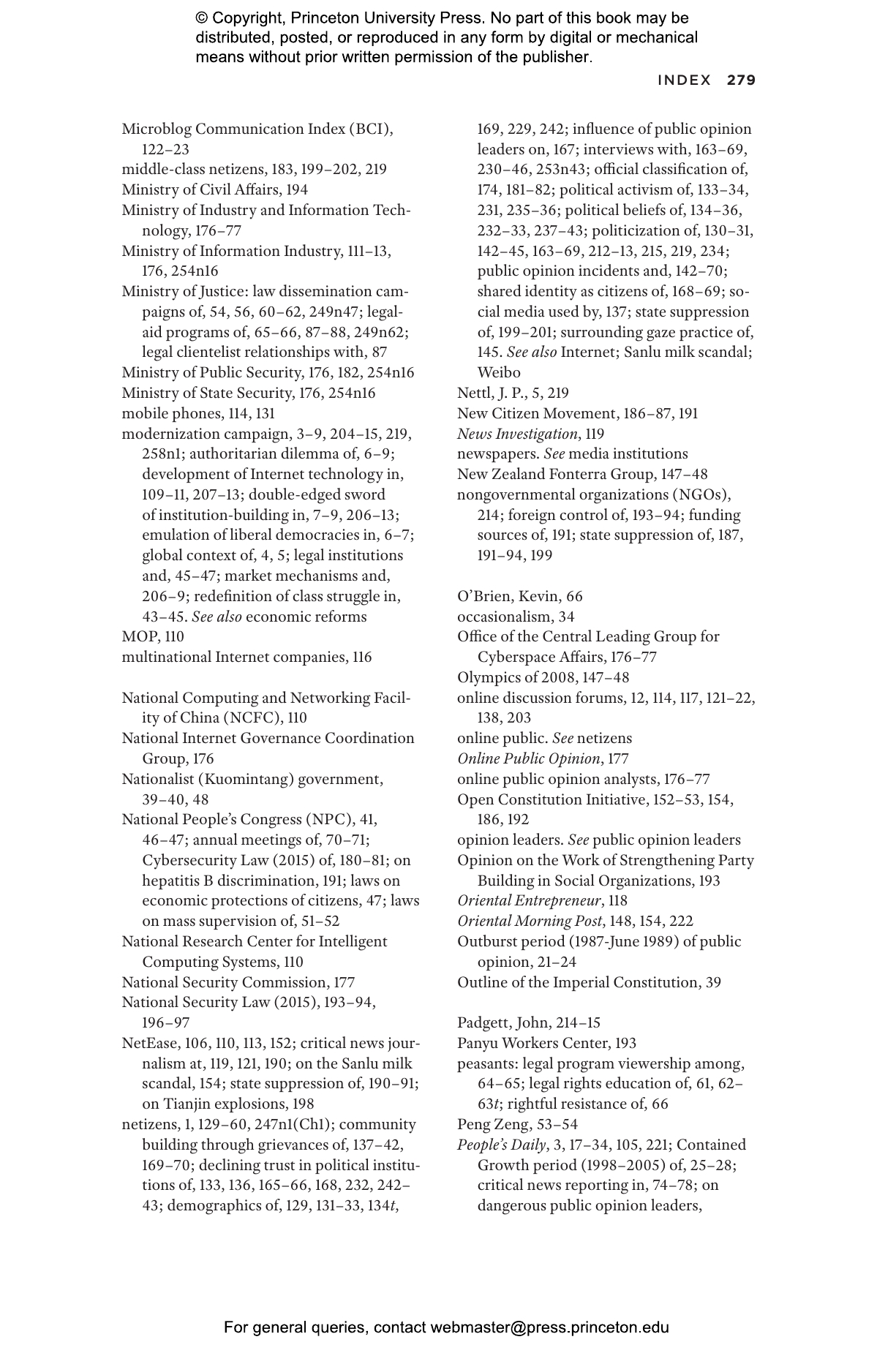 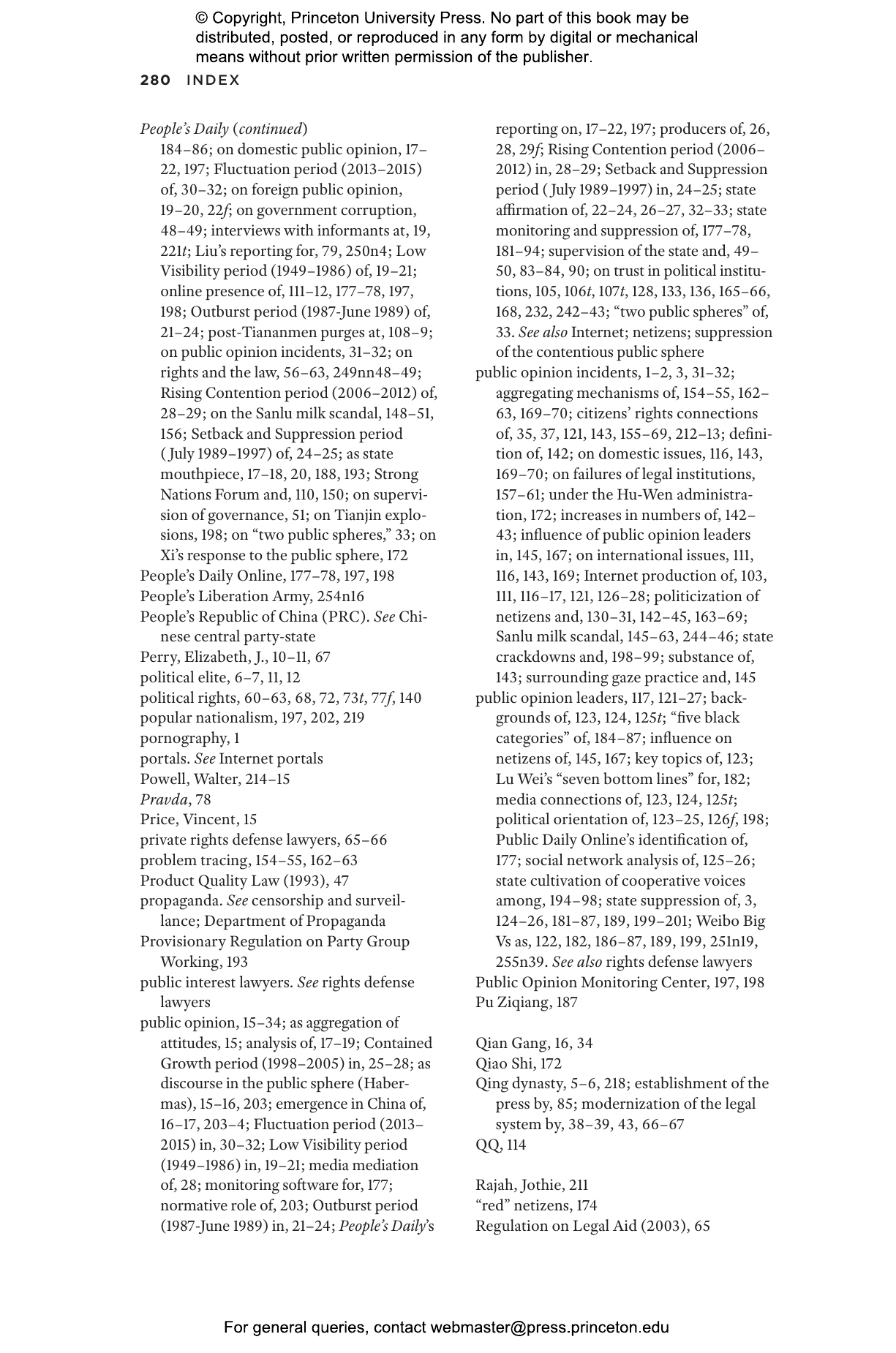 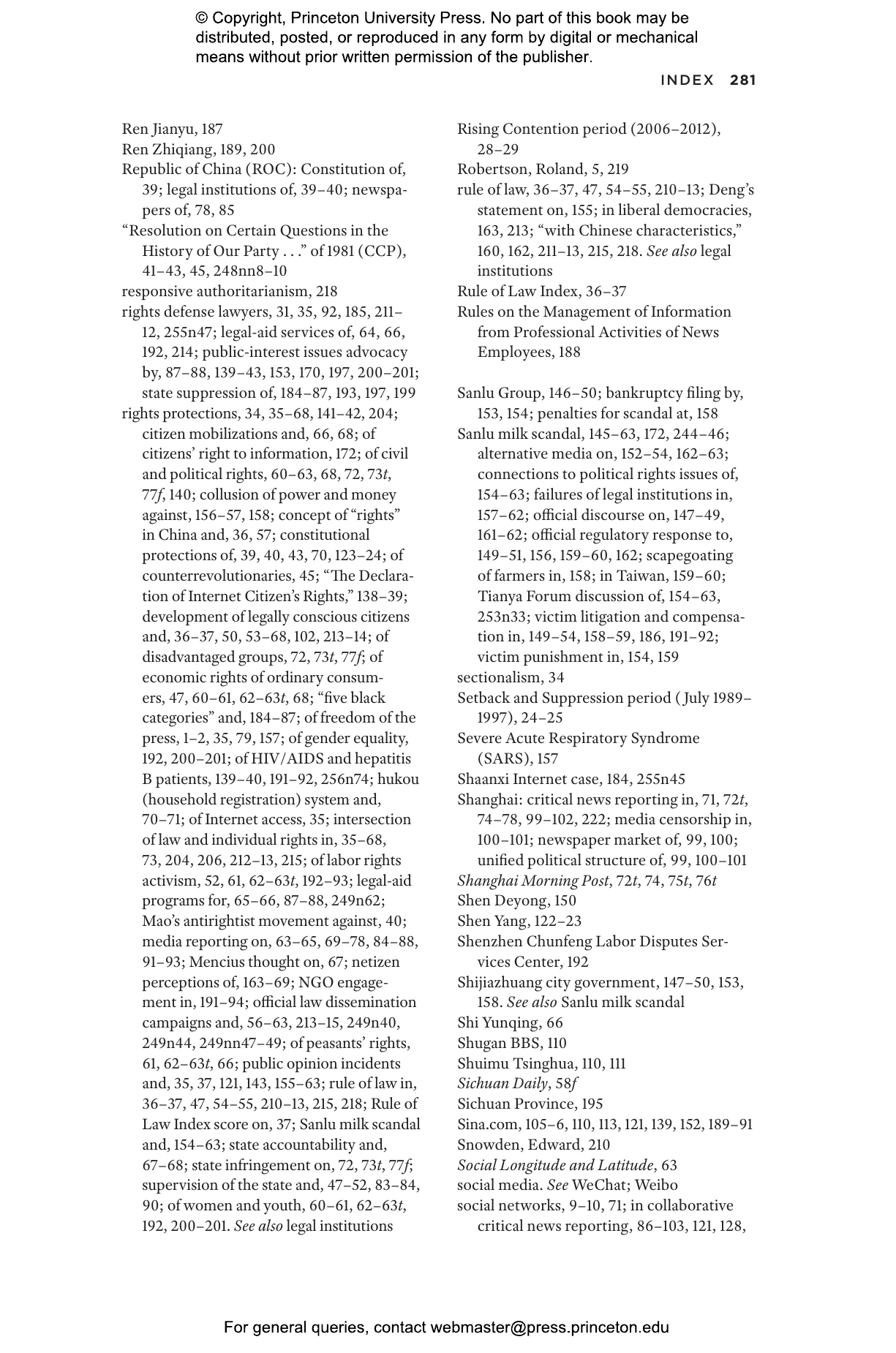 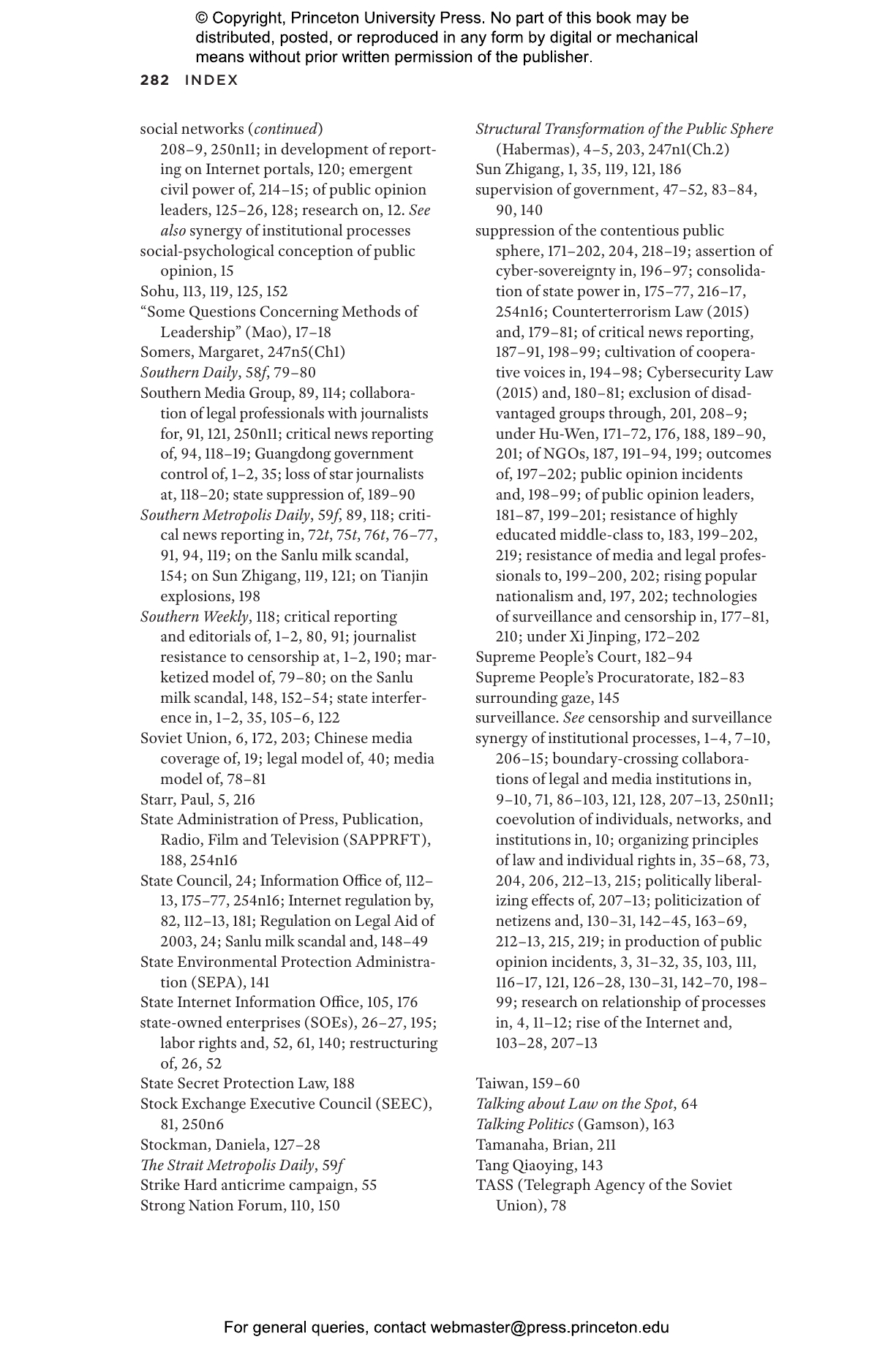 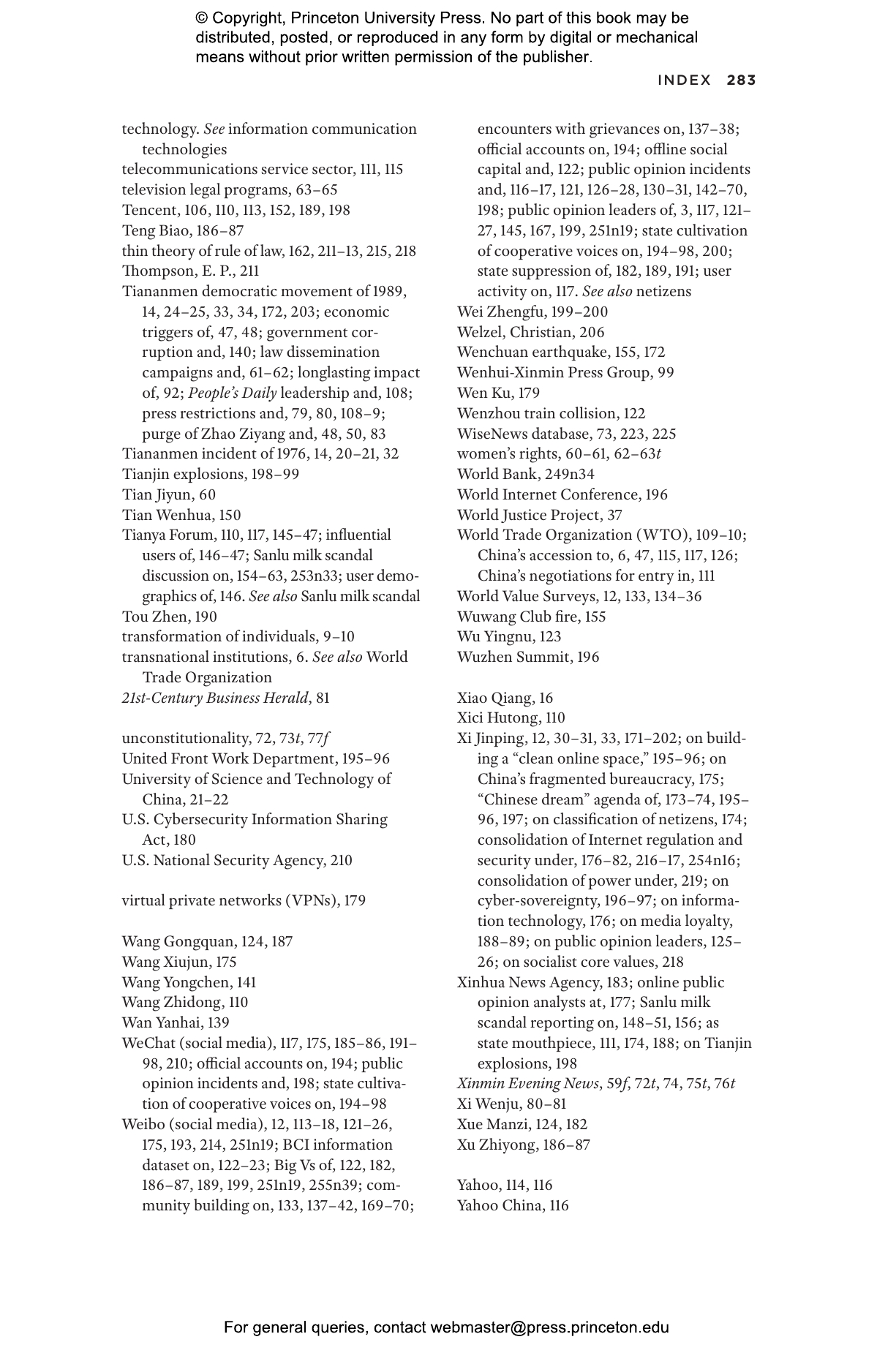 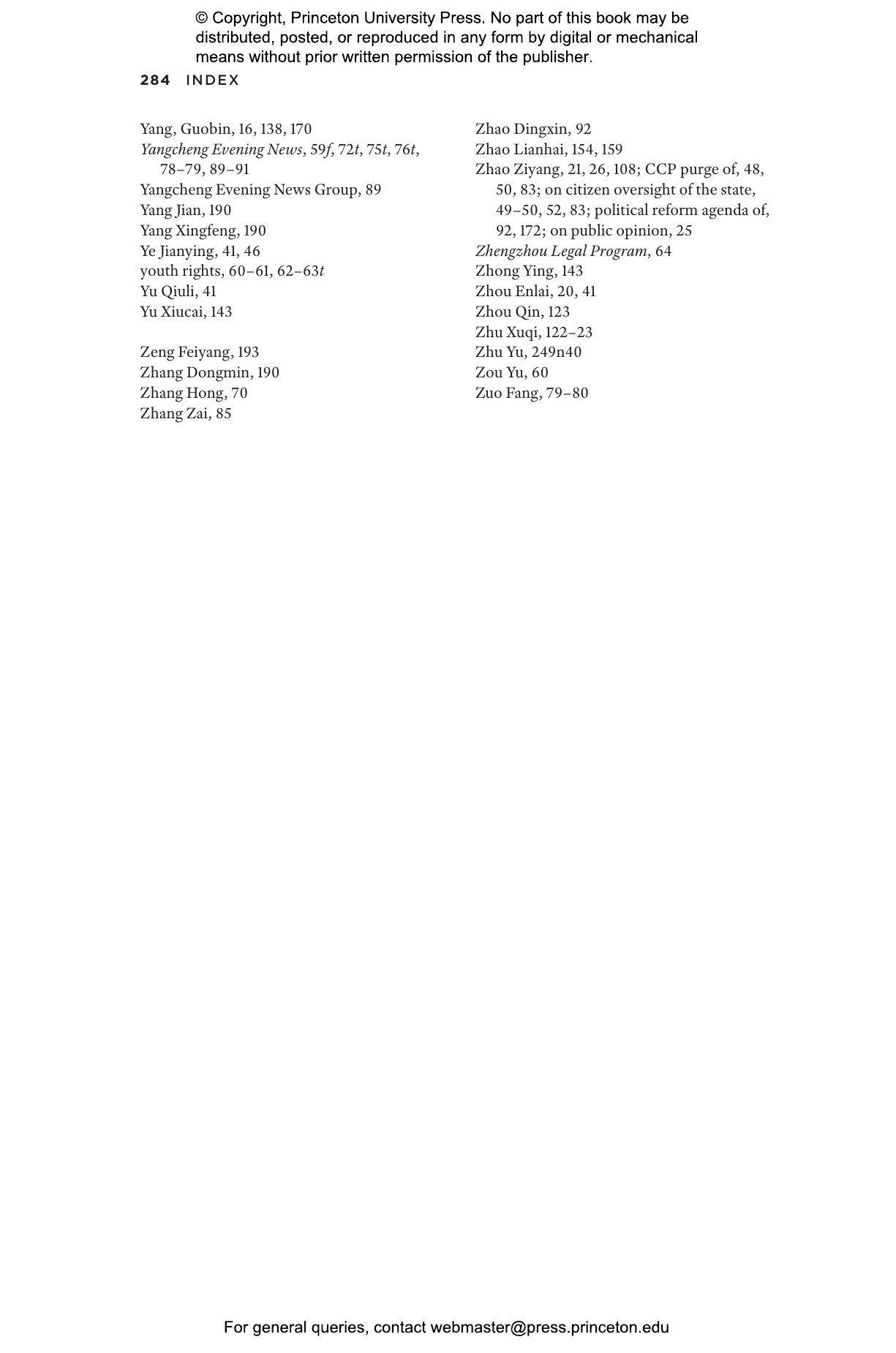 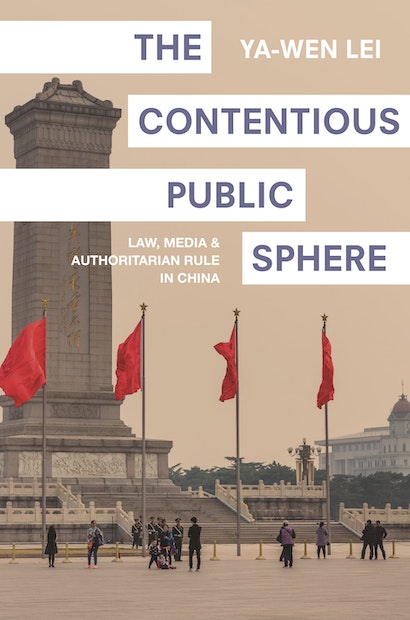 Since the mid-2000s, public opinion and debate in China have become increasingly common and consequential, despite the ongoing censorship of speech and regulation of civil society. How did this happen? In The Contentious Public Sphere, Ya-Wen Lei shows how the Chinese state drew on law, the media, and the Internet to further an authoritarian project of modernization, but in so doing, inadvertently created a nationwide public sphere in China—one the state must now endeavor to control. Lei examines the influence this unruly sphere has had on Chinese politics and the ways that the state has responded.

Using interviews, newspaper articles, online texts, official documents, and national surveys, Lei shows that the development of the public sphere in China has provided an unprecedented forum for citizens to influence the public agenda, demand accountability from the government, and organize around the concepts of law and rights. She demonstrates how citizens came to understand themselves as legal subjects, how legal and media professionals began to collaborate in unexpected ways, and how existing conditions of political and economic fragmentation created unintended opportunities for political critique, particularly with the rise of the Internet. The emergence of this public sphere—and its uncertain future—is a pressing issue with important implications for the political prospects of the Chinese people.

Investigating how individuals learn to use public discourse to influence politics, The Contentious Public Sphere offers new possibilities for thinking about the transformation of state-society relations.

Ya-Wen Lei is an assistant professor in the Department of Sociology and an affiliate of the Fairbank Center for Chinese Studies at Harvard University. 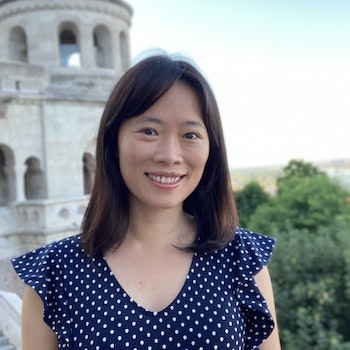 "China, a modernizing and authoritarian state, is determined to contain a politically awakened citizenry keen to expand its access to information in a contentious, unauthorized public sphere. Ya-Wen Lei delineates this paradoxical drama with remarkable skill, sensitivity, and fluency. With a wealth of resources, she deploys an impressive mix of methods and strategies to unravel this globally significant problem. This brilliant book is indispensable not only for specialists and laymen interested in China's political development, but also for students of the state and civil society."—Orlando Patterson, author of Freedom: Freedom in the Making of Western Culture

"Demonstrating the existence of an unruly public sphere in China's authoritarian state, this important book argues that this sphere grew paradoxically from the nation’s imperative to modernize itself in the post-Mao era, through the institutionalization of modern law, commercialization of media, and embracing of new information technologies. This sophisticated, balanced, and wide-ranging book makes significant contributions to the political and media sociology of China, and offers insights for rethinking liberal theories of the public sphere and the realities of public expression in authoritarian regimes."—Guobin Yang, University of Pennsylvania

"Ya-Wen Lei has written an important and exciting book that ought to be read by anyone interested in the interplay of politics, law, and media not just in China and other authoritarian countries, but anywhere in the world. Much of what's written about the digital revolution will prove to be of ephemeral interest. This book offers a model for a more durable understanding of the forces shaping the public sphere."—Paul Starr, Princeton University

"Ambitious and accomplished, this is a major interpretive synthesis concerning the public sphere in China—complete with valuable new findings. The book's arguments are clear, competent, and original and it should stir interest, debate, and rethinking."—Michael Schudson, author of The Rise of the Right to Know