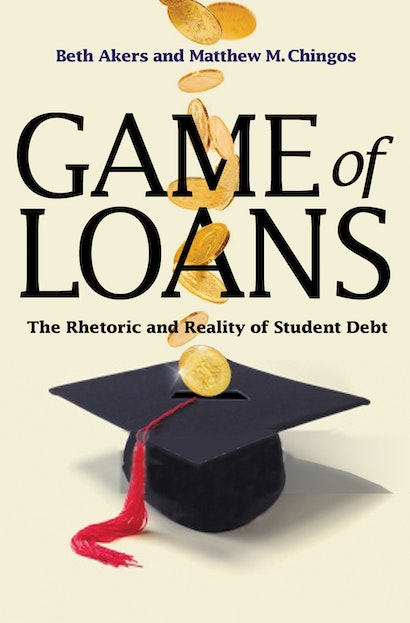 College tuition and student debt levels have been rising at an alarming pace for at least two decades. These trends, coupled with an economy weakened by a major recession, have raised serious questions about whether we are headed for a major crisis, with borrowers defaulting on their loans in unprecedented numbers and taxpayers being forced to foot the bill. Game of Loans draws on new evidence to explain why such fears are misplaced—and how the popular myth of a looming crisis has obscured the real problems facing student lending in America.

Bringing needed clarity to an issue that concerns all of us, Beth Akers and Matthew Chingos cut through the sensationalism and misleading rhetoric to make the compelling case that college remains a good investment for most students. They show how, in fact, typical borrowers face affordable debt burdens, and argue that the truly serious cases of financial hardship portrayed in the media are less common than the popular narrative would have us believe. But there are more troubling problems with student loans that don’t receive the same attention. They include high rates of avoidable defaults by students who take on loans but don’t finish college—the riskiest segment of borrowers—and a dysfunctional market where competition among colleges drives tuition costs up instead of down.

Persuasive and compelling, Game of Loans moves beyond the emotionally charged and politicized talk surrounding student debt, and offers a set of sensible policy proposals that can solve the real problems in student lending.

Beth Akers is a senior fellow at the Manhattan Institute for Policy Research. Matthew M. Chingos is director of the Education Policy Program at the Urban Institute and the coauthor of Crossing the Finish Line: Completing College at America's Public Universities (Princeton).

"In Game of Loans, we learn that only a quarter of first-year college students can predict their debt load within 10 percent of the correct amount, in large part because students are regularly overpromised financial aid in complex deals that then change year by year, just like the subprime mortgages that blew up in 2008."—Rana Foroohar, New York Review of Books

"Successfully aimed at non-economists, [Game of Loansis] clearly written. [It is a] powerful antidote to the stereotypes and myths that have grown up around student loans."—David Wessel, Wall Street Journal

"For many casual observers, the evidence and arguments presented in …Game of Loanswill be new. And if [you] read [the] book, that could help inform a public debate that's bound to stick around for some time."—Beckie Supiano, Chronicle of Higher Education

"The authors [ofGame of Loans] deserve credit for taking a good hard look at prevailing narratives, such as the one that holds that student loans are causing borrowers to delay major life decisions, such as buying homes or getting married, and building a case that many of those narratives are unfounded."—Jamaal Abdul-Alim, Diverse Magazine

"[Akers and Chingos] provide compelling evidence that paying for the costs of higher education is relatively feasible under the plethora of public financing options available."—AEIdeas

"Game of Loansincludes a clear and concise analysis of college prices and student borrowing patterns over time, filling in holes in a debate often bereft of relevant and reliable data."—Jason Delisle, Education Next

"Higher education is essential to our nation's future, so how do we pay for it? Game of Loans tackles that urgent question—and it does so brilliantly. With lucid prose and crisp analysis, Beth Akers and Matthew Chingos puncture myths, reveal facts, and chart a sensible course forward. This book is a game-changer, and it should be required reading for everyone interested in higher education and public policy."—Christopher L. Eisgruber, president of Princeton University

"If you want to understand student debt, read this book. Akers and Chingos get past anecdote and hyperbole to explain, with data, what is and is not working in our student loan system. Game of Loans is rigorous, clearly written, and eye opening. Students, policy wonks, and curious observers of the student loan 'crisis' will all benefit from its insights."—Susan Dynarski, University of Michigan

"Clearly written and much needed, Game of Loans provides insight into the student loan market in the United States."—Sarah Turner, University of Virginia

"This insightful book provides an excellent overview of the current student loan system. Presenting evidence about who borrows, how much they borrow, and the burden of repayment, Akers and Chingos refute the idea that there is a general student loan crisis, highlight the real problems that do exist, and propose solutions."—Sandy Baum, coauthor of the annual Trends in Student Aid and Trends in College Pricing