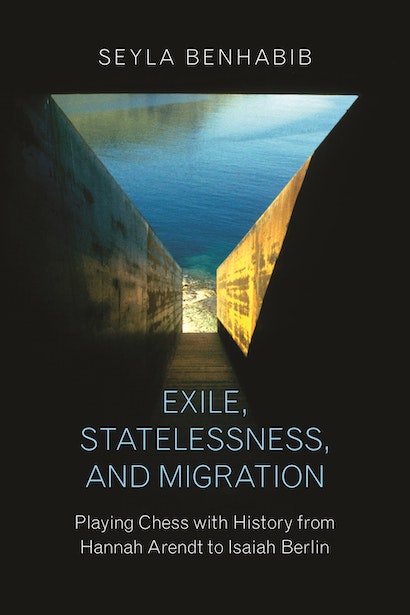 Exile, Statelessness, and Migration explores the intertwined lives, careers, and writings of a group of prominent Jewish intellectuals during the mid-twentieth century—in particular, Theodor Adorno, Hannah Arendt, Walter Benjamin, Isaiah Berlin, Albert Hirschman, and Judith Shklar, as well as Hans Kelsen, Emmanuel Levinas, Gershom Scholem, and Leo Strauss. Informed by their Jewish identity and experiences of being outsiders, these thinkers produced one of the most brilliant and effervescent intellectual movements of modernity.

Political philosopher Seyla Benhabib’s starting point is that these thinkers faced migration, statelessness, and exile because of their Jewish origins, even if they did not take positions on specifically Jewish issues personally. The sense of belonging and not belonging, of being “eternally half-other,” led them to confront essential questions: What does it mean for the individual to be an equal citizen and to wish to retain one’s ethnic, cultural, and religious differences, or perhaps even to rid oneself of these differences altogether in modernity? Benhabib isolates four themes in their works: dilemmas of belonging and difference; exile, political voice, and loyalty; legality and legitimacy; and pluralism and the problem of judgment.

Surveying the work of influential intellectuals, Exile, Statelessness, and Migration recovers the valuable plurality of their Jewish voices and develops their universal insights in the face of the crises of this new century.

Seyla Benhabib is the Eugene Meyer Professor of Political Science and Philosophy at Yale University. Her many books have been translated into more than fourteen languages, and include Dignity in Adversity, The Rights of Others, and The Claims of Culture (Princeton).

"Seyla Benhabib[‘s], Exile, Statelessness, and Migration, presents us with a series of intellectual encounters that have shaped her own thinking over the course of a long and distinguished career as a political theorist and philosopher . . . written in an elegant, reflective mode that avoid the pitfalls of narrow academicism. . . . All the chapters in this excellent and inspiring book converge on the hopeful thought that, even in our own 'dark times,' the normative element in political theory still retains the power to help to illuminate our path into an uncertain future."—Peter Gordon

"A complex and remarkable book that defies easy categorization. . . .this book will be a significant resource for scholars, and it will be indispensable for those who want to enter into these dialogues themselves."—Chris Irwin, European Legacy

“Examining key aspects of German-Jewish thought in the twentieth century, this incisive and lucid book traces affinities and difference in the lives and work of intellectuals confronting the pressures of exile, statelessness, and migration. I learned a great deal about this generation of thinkers and about ways we need to consider the political challenges of our time. A pleasure to read.”—Andreas Huyssen, Columbia University

“This impressive book focuses on a group of important twentieth-century Jewish refugees and exiles and makes a powerful case that they continue to speak eloquently to some timely political and philosophical issues. Benhabib, one of the world’s preeminent scholars of twentieth-century political thought, offers insightful readings of these figures as well as sympathetic but critical engagements with contemporary authors.”—William E. Scheuerman, Indiana University