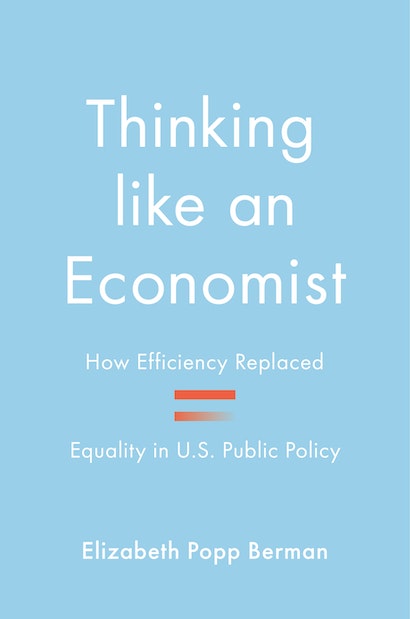 For decades, Democratic politicians have frustrated progressives by tinkering around the margins of policy while shying away from truly ambitious change. What happened to bold political vision on the left, and what shrunk the very horizons of possibility? In Thinking like an Economist, Elizabeth Popp Berman tells the story of how a distinctive way of thinking—an “economic style of reasoning”—became dominant in Washington between the 1960s and the 1980s and how it continues to dramatically narrow debates over public policy today.

Introduced by liberal technocrats who hoped to improve government, this way of thinking was grounded in economics but also transformed law and policy. At its core was an economic understanding of efficiency, and its advocates often found themselves allied with Republicans and in conflict with liberal Democrats who argued for rights, equality, and limits on corporate power. By the Carter administration, economic reasoning had spread throughout government policy and laws affecting poverty, healthcare, antitrust, transportation, and the environment. Fearing waste and overspending, liberals reined in their ambitions for decades to come, even as Reagan and his Republican successors argued for economic efficiency only when it helped their own goals.

A compelling account that illuminates what brought American politics to its current state, Thinking like an Economist also offers critical lessons for the future. With the political left resurgent today, Democrats seem poised to break with the past—but doing so will require abandoning the shibboleth of economic efficiency and successfully advocating new ways of thinking about policy.

Elizabeth Popp Berman is associate professor of organizational studies at the University of Michigan and the author of Creating the Market University: How Academic Science Became an Economic Engine (Princeton). She lives in Ann Arbor, Michigan. Twitter @epopppp

“In what is sure to become a classic, Berman unravels how economists, and their way of thinking, came to exert such a powerful influence on the institutions that shape U.S. policymaking. Her sharp analysis shows how the resulting fixation on efficiency, a single-minded focus on market-oriented solutions, and the abandonment of political claims based on universalism, rights, and equality has undermined our ability to solve major social problems.”—Pamela Herd, Georgetown University

“This book deserves to make waves. It is original, finely written, provocative, and right. Fragments of this story have been told before—but Berman has done the hard work of crafting a compelling new narrative about where some of the most crucial aspects of our modern world have come from. Thinking like an Economist deserves a wide readership, not just among sociologists, but political scientists, economists, and everyone interested in how the economic approach came to dominate American policy debate.”—Henry Farrell, Johns Hopkins University

“If you want to understand modern policy debates in economics, you need to go beyond the shopworn neoliberalism narrative and explore what economists really are thinking. Elizabeth Popp Berman’s book provides a wonderful guide for doing just that.”—David Colander, Middlebury College

“The compass by which a nation sets its public policy tells us a good deal about its values and priorities. In this remarkable book, Elizabeth Popp Berman tells the story of how, for the United States, efficiency became the North Star with the economist as navigator. Less a partisan story than one of a shift in the culture of governance, this book sheds important new light on how economic thinking has infused both our policy priorities and the mechanisms for attempting to implement them.”—Steven G. Medema, Duke University