From New York Times bestselling author and economics columnist Robert Frank, a compelling book that explains why the rich underestimate the importance of luck in their success, why that hurts everyone, and what we can do about it 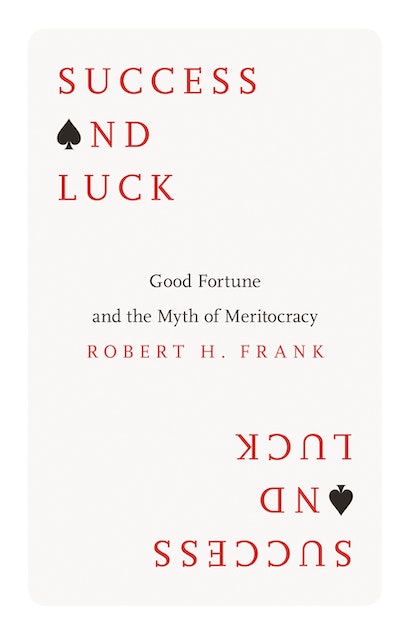 How important is luck in economic success? No question more reliably divides conservatives from liberals. As conservatives correctly observe, people who amass great fortunes are almost always talented and hardworking. But liberals are also correct to note that countless others have those same qualities yet never earn much. In recent years, social scientists have discovered that chance plays a much larger role in important life outcomes than most people imagine. In Success and Luck, bestselling author and New York Times economics columnist Robert Frank explores the surprising implications of those findings to show why the rich underestimate the importance of luck in success—and why that hurts everyone, even the wealthy.

Frank describes how, in a world increasingly dominated by winner-take-all markets, chance opportunities and trivial initial advantages often translate into much larger ones—and enormous income differences—over time; how false beliefs about luck persist, despite compelling evidence against them; and how myths about personal success and luck shape individual and political choices in harmful ways.

But, Frank argues, we could decrease the inequality driven by sheer luck by adopting simple, unintrusive policies that would free up trillions of dollars each year—more than enough to fix our crumbling infrastructure, expand healthcare coverage, fight global warming, and reduce poverty, all without requiring painful sacrifices from anyone. If this sounds implausible, you’ll be surprised to discover that the solution requires only a few, noncontroversial steps.

Compellingly readable, Success and Luck shows how a more accurate understanding of the role of chance in life could lead to better, richer, and fairer economies and societies.

A belief in meritocracy is not only false: it’s bad for you

Robert H. Frank is the H. J. Louis Professor of Management and Professor of Economics at Cornell University's Johnson School of Management. He has been an Economic View columnist for the New York Times for more than a decade and his books include The Winner-Take-All Society (with Philip J. Cook), The Economic Naturalist, The Darwin Economy (Princeton), and Principles of Economics (with Ben S. Bernanke). He lives in Ithaca, New York.

"The reminder about the important role of luck is welcome."—Enlightened Economist

"Frank is not just arguing that luck plays an important role in the lives of successful people such as Al Pacino. If that were all he was doing, his book would be engaging but trivial. But it is much more interesting than that."—Tyler Cowen, Financial Times

"Frank's book gives a compelling argument for why we should consider our collective needs more when we look to change society for the better."—Jill Suttie, Psy.D., Greater Good

"Well reasoned, coherent, and compelling—Frank is one of the great writers of economics."—Fortune

"The most striking of Frank's arguments is a computer-simulated proof of luck's importance, even in very nearly meritocratic situations."—Tim Smith-Laing, Daily Telegraph

"Reading Success and Luck is almost like having a robust conversation over dinner—a simple premise, some explanation, a few examples. . . . It is commendable that he is addressing the problem with an actual solution in mind."—Kris Rothstein, Bookslut

"This is a bold vision and, although controversial, has a good deal more realism than the dangerous siren calls from the left for wage caps or punitive income tax rates for high earners."—Matthew Syed, The Times

"Like any good economist, Frank backs up his argument with studies and statistics; and like any good behavioral economist, he investigates why this obvious fact is so hard for so many Americans to accept, and offers some strategies for overcoming that resistance."—Cory Doctorow, Boing Boing

"Frank points out that for every big winner, there are scores of people who are as skilled, hard-working and intelligent, but came in just behind. The lack of a lucky break can be the difference between wild success and a near miss or worse."—Barry Ritholtz, Bloomberg View

"Success and Luck is an important book: elegantly written, well argued and desisting from self-indulgence in its length."—Tim Wigmore, New Statesman

"The book is diverting and easy to read. . . . He makes a compelling case for the role of luck in much of the wealth held by people in developed societies."—Ouida Taaffe, Financial World

"[An] occasionally humorous, yet most insightful book."—David Marx Book Reviews

"How important is luck in monetary success?. . . . Is luck as important as hard work in becoming successful?. . . . These important questions—we ponder them often—that economists rarely bother to study. Except for one of my favourite economists Robert Frank."—Ross Gittins, Sydney Morning Herald

"What makes Success and Luck different is that Frank connects the importance of luck in determining personal economic success with a set of larger policy recommendations."—Dr. Joshua Kim, Inside Higher Ed

"Success and Luck is written in a clear, engaging and personable style, not least because it is littered with anecdotes and stories illustrating the huge effects that tiny chance events can have. I found examples from Frank's own life especially compelling."—Dan McArthur, LSE Review of Books

"Though hard work, effort, and schooling are important factors, Frank demonstrates convincingly that pure, random luck also matters (a lot). . . . This book is well reasoned, coherent, and compelling—Frank is one of the great writers of economics."—Choice

"Robert Frank's recent book, Success and Luck, is an engaging, partly autobiographical account of why and how most Americans underestimate the role of luck in economic success. Frank sees our tendency to overlook the role of luck as a cultural bias that helps explain why we are less likely than Europeans to favor high taxes on the rich and generous benefits for the poor."—Christopher Jencks, The American Interest

"An important book, which takes a plausible approach to a difficult problem of genuine significance. It deserves to be widely read and publicly discussed."—James Case, SIAM News

"Frank makes a strong case for his account of the many ways that chance contributes to social outcomes. In a rational, fact-based world, policy makers would pay attention."—David A. Kirsch, Administrative Science Quarterly

"A very courageous book. . . . Luck, and lucky encounters are realistically important and a great part of our life."—Anna Maria Polidori, Al Femminile

"Praise for the previous edition: "Frank deftly weaves personal anecdotes. . . With fascinating case studies. . . . Fortune, Frank says, favors the fortunate. And not acknowledging that can have unlucky consequences, for both policymakers and businesses.""—Financial Times

"Well-crafted and enjoyable to read."—Alain Trannoy, Journal of Economic Inequality

"Building a successful life requires a deep conviction that you are the author of your own destiny. Building a successful society requires an equally deep conviction that no one's destiny is their own to write. Balancing these seemingly contradictory ideas may be the most important social challenge of our time. And Robert Frank has just written the most important book on the subject. Success and Luck is essential reading."—Duncan Watts, principal researcher, Microsoft Research, and author of Everything Is Obvious (Once You Know the Answer): How Common Sense Fails Us

"Success and Luck is a wonderful read—insightful, humorous, loaded with evidence, and full of common sense."—Frank Convery, chief economist of the Environmental Defense Fund

"The most skillful writer in economics has now written an amazing book on luck. Robert Frank brilliantly explains why luck is playing an increasingly important role in the world's outcomes, why it is hard for all of us to realize it, and why there is a simple fix to the vast inequalities caused by sheer luck—a solution that will make all of our lives better. You will feel very lucky to have read it."—Nicholas Epley, author of Mindwise: Why We Misunderstand What Others Think, Believe, Feel, and Want

"We all like to think we live in a just world, where most people get what they deserve most of the time. In this lovely and insightful book, Robert Frank urges us to think again. His poignant description of random wins and losses in his own career complements his deft summary of the broad evidence that chance shapes success. Not that we shouldn't all try hard to succeed—we should, rather, try harder to pool risks and hedge bets in ways that improve both efficiency and justice."—Nancy Folbre, author of Greed, Lust, and Gender: A History of Economic Ideas

"Growing inequality of wealth, leading to growing inequality of political power, has become a first-order social problem. Understanding the role of luck in economic outcomes is the first step toward formulating sensible policies to get runaway inequality back under control. Robert Frank's Success and Luck is a jewel: succinct, well written, and convincing. We're all lucky to be able to read it."—Mark A.R. Kleiman, New York University's Marron Institute

"Robert Frank has a terrific mind and a huge heart. In this book, he shows that luck plays a massive role in successful lives—and he explains precisely why we underestimate that role. In the process, he offers important recommendations for how to make our economy both more efficient and more fair. A beautiful book."—Cass R. Sunstein, Harvard University

"In this very valuable and readable book, Robert Frank presents the evidence and tightens the case for an important and vastly underappreciated fact: luck has more influence on personal success than most of us recognize or admit. He also makes the case that luck's role in where we end up in terms of income, education, status, and other outcomes has a big impact on how we perceive government, taxes, and public social spending."—Lane Kenworthy, University of California, San Diego

"Robert Frank's Success and Luck should be read by everybody. Not only will you learn much new, subtle, important economics, you will also learn about yourself. You will be more generous and more satisfied: because you will see your successes as not just the product of your own hard work, but also of some good luck and help from others. All that, and, also, Success and Luck is a joy to read. I am going to send a copy to my brother (a physicist) and to my son (an economist) for their birthdays."—George A. Akerlof, Nobel Laureate in Economics