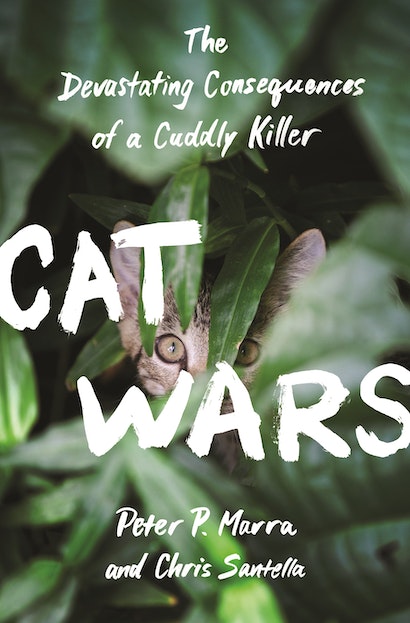 In 1894, a lighthouse keeper named David Lyall arrived on Stephens Island off New Zealand with a cat named Tibbles. In just over a year, the Stephens Island Wren, a rare bird endemic to the island, was rendered extinct. Mounting scientific evidence confirms what many conservationists have suspected for some time—that in the United States alone, free-ranging cats are killing birds and other animals by the billions. Equally alarming are the little-known but potentially devastating public health consequences of rabies and parasitic Toxoplasma passing from cats to humans at rising rates. Cat Wars tells the story of the threats free-ranging cats pose to biodiversity and public health throughout the world, and sheds new light on the controversies surrounding the management of the explosion of these cat populations.

This compelling book traces the historical and cultural ties between humans and cats from early domestication to the current boom in pet ownership, along the way accessibly explaining the science of extinction, population modeling, and feline diseases. It charts the developments that have led to our present impasse—from Stan Temple’s breakthrough studies on cat predation in Wisconsin to cat-eradication programs underway in Australia today. It describes how a small but vocal minority of cat advocates has campaigned successfully for no action in much the same way that special interest groups have stymied attempts to curtail smoking and climate change.

Cat Wars paints a revealing picture of a complex global problem—and proposes solutions that foresee a time when wildlife and humans are no longer vulnerable to the impacts of free-ranging cats.

Peter P. Marra has written more than 175 scientific publications, is the coeditor of Birds of Two Worlds, and directs the Smithsonian Migratory Bird Center. Chris Santella is the author of many books, including the Fifty Places travel and outdoor series and The Tug Is the Drug. His writing has appeared in such publications as the New York Times, the Wall Street Journal, the New Yorker, and Trout.

"We know that nature's theater bristles with industrious carnivores and omnivores—hawks that pluck cardinals right off a bird feeder, squirrels that grab eggs from crows' nests, and crows that grab babies from squirrels' nests. What makes free-ranging cats such an exceptionally dangerous threat to birds and other wildlife? The book describes a number of factors."—Natalie Angier, New York Review of Books

"Peter Marra and Chris Santella base their case in the end on an appeal to the scientific evidence, which they set out as calmly as they can. . . . What they fear most, however, is the inaction of ordinary, decent people who have just not grasped how quickly the tapestry of the world's ecology is unravelling before our eyes."—Jeremy Mynott, Times Literary Supplement

"Marra and Santella thoughtfully examine the severe ecological damage caused by feral cats and outdoor pet cats. Highly readable. . . . Cat lovers are presented in a sympathetic light throughout, making the book worth reading no matter a reader's position on free-ranging cats."—Publishers Weekly

"This deeply researched overview by conservation scientist Peter Marra and writer Chris Santella interlaces discussions of feline domestication and avian conservation with the science of decline and of feline spillover diseases."—Nature

"Marra and Santella make an impassioned plea for action in this compelling report on an often overlooked threat."—Scientific American

"Cat Wars is a work of commanding reasonableness, with plenty of facts and figures and the testimonies of experts to support its unpalatable conclusions. There are some fascinating digressions, too, including sympathetic profiles of activists on both sides of the debate in the U.S."—The Australian

"Cat Wars has a broader, more ecological focus, documenting the global impact of cats on wildlife, both by preying on animals and by transmitting diseases. . . . Marra and Santella explore the solutions (keeping cats indoors, catios—an enclosed area outside the home—and killing strays). . . . This is an important and eye-opening book that clearly says: 'keep Tiddles a house cat.'"—Adrian Barnett, New Scientist

"Cat Wars is valuable that it calls to attention a huge problem (set of problems, really) of which many people have, hitherto, been unaware—or ignored."—10,000 Birds Blog

"TNR advocates and birders with outdoor cats are encouraged to read this book."—Birdwatcher's Digest

"This necessary book provides the science-based case for removal of free-roaming house cats from our environment. . . . If you are unfamiliar with these important issues, you should find this book a useful starting point."—Gerry Rising, Buffalo Spree

"Cat Wars covers not only the data corroborating the problems posed by loose cats but also the people involved in the story. Marra and Santella interview researchers and activists on both sides. The readers learns of efforts to bridge differences between factions, so the massive mortality caused by cats can be effectively reduced. This is a well-written summary of a complicated problem that deserves great attention."—Joel Greenberg, BirdWatching Magazine

"In this book, the authors provide a detailed examination of the threats to global biodiversity, the environment and public health posed by free-ranging cats. They describe many scientific studies that use population modelling, feline diseases and extinctions, and they share the history of how small, but extremely vocal, special interest groups successfully prevent any action being taken to deal with the vast population explosions of feral and free-roaming cats. Cat Wars examines this complex global issue and proposes scientifically sound real-world solutions to this problem. This painstakingly researched and readable book is a must-read for all pet owners (whether you have a cat or not) and is an iron-clad argument that the best thing for local wildlife, people and the cats themselves is for cat owners to keep their pets indoors, always."—Forbes.com, a "10 Best Conservation and Environment Books of 2016"

"[Cat Wars] is a [book] we'd all benefit from reading."—Ed Kanze, Bedford Record-Review

"It took courage, good scholarship, and clearly a passion for wildlife for Marra and Santella to draft this thorough review of the cat problem. . . . The authors do a great job of gathering evidence and presenting it thoroughly and authoritatively, yet the book is entertaining and easy to read."—Jack Dumbacher, Journal of Field Ornithology

"Cat Wars makes a powerful case for the containment and management of free-ranging cats from both animal welfare and wildlife protection perspectives."—Katherine Moseby, Quarterly Review of Biology

"Very few people enjoy thinking about the calamitous problem of free-roaming cats and biodiversity, and even fewer dare to talk about it openly. Marra and Santella's book is therefore doubly welcome. It's not only important reading for anyone who cares about nature. With its engaging storytelling, its calmly scientific approach, and its compassionate handling of a highly fraught issue, this is also a book that a person might actually read for pleasure."—Jonathan Franzen

"Cats, most of them unowned free-ranging cats, kill as many as four billion birds in the United States each year. What, if anything, should be done about it? Cat Wars tackles this difficult dilemma. If you are a cat lover, a bird lover, a philosopher, an ethicist, or just anyone interested in gut-wrenching dilemmas, you will find this a gripping book."—Jared Diamond, Pulitzer Prize-winning author of Guns, Germs, and Steel

"Here, at last, is what native-ecosystem advocates have been waiting for—a complete, dispassionate examination of America's free-ranging cat debacle. It's all here—from the horrendous bird mortality to the cat-borne pathogens blighting wildlife and humans to the cruelty and futility of Trap-Neuter-Return. Everyone gets to speak—including the feral-cat lobby."—Ted Williams, environmental journalist

"The level-tempered approach of Cat Wars will win many advocates. Anyone interested in the broader topics of a healthy environment and healthy human society will benefit from reading this book. It's as powerful as TV ads featuring the ‘crying Indian' in the antilittering campaign of the early 1970s."—Bill Thompson III, editor of Bird Watcher's Digest

"In Cat Wars, Peter Marra and Chris Santella lay out the extraordinary (and extraordinarily devastating) toll that America's favorite pet inflicts on America's favorite birds. At a time when native bird populations are in desperate trouble, and the number of free-ranging cats has never been higher, the authors bring clear-eyed science and commonsense solutions to one of the most polarizing issues in avian conservation. This is an important book, even if the message is not a comfortable one."—Scott Weidensaul, author of Living on the Wind: Across the Hemisphere with Migratory Birds

"A great overview of a complex and often emotional challenge. Cat Wars unravels yet another layer of the global decline in biodiversity and frames the potentially drastic consequences of inaction."—Grant Sizemore, American Bird Conservancy

"Cat Wars is a brave, engaging, and careful accounting of the cats we love and the devastation they inflict on birds and other wildlife."—John M. Marzluff, author of Welcome to Subirdia: Sharing Our Neighborhoods with Wrens, Robins, Woodpeckers, and Other Wildlife